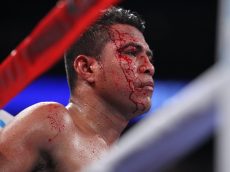 It was a super-close, ultra-competitive, gory spectacle between Srisaket Sor Rungvisai and pound-for-pound #1 Roman Gonzalez, but in the end Saturday night, probably the wrong guy won, as Rungvisai took Gonzalez’s undefeated record by decision. The scorecards going to Rungvisai tarnished what was an extraordinarily awesome battle, one of the bloodiest fights you’ll ever see. […] 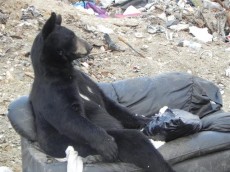 For the first time in what seems like ages, there’s no high-level boxing on this weekend. So make like the bear and chill this weekend. Unless the bear is watching boxing, in which case he’s going to be disappointed. Anyway, here’s the boxing schedule for the week, such as it is. Vyacheslav Shabranskyy vs Paul […]

The above video of Jermain Taylor looks like it was made by someone who is definitely not crazy and wouldn’t shoot their cousin… right? Apart from the former middleweight champ/brain-injury-sufferer, there are a few fights on TV, though they’re nothing to write home about (unless you’re one of the boxers fighting, in which case I think at least […]