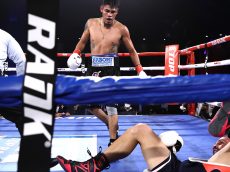 It’s fair to assume that there’s ample overlap between boxing and people who have dark senses of humor. So one could be forgiven for laughing when hearing Christopher Diaz’s trainer tell him just before the final round of his Saturday war with Emanuel Navarrete: “There is no pain.” Buddy. Navarrete is nothing BUT pain! Easy […] 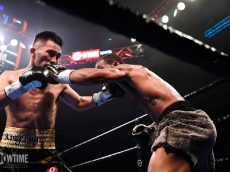 Showtime made a risky decision to headline a doubleheader with A-sides who mainly had in common that they are ultra-talented fighters who routinely disappoint us. Guillermo Rigondeaux is at times virtually unwatchable. Gary Russell Jr. can also rarely be watched, because he fights about once a year — literally so, since 2015. All in all, […] 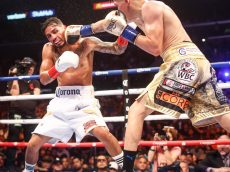 Leo Santa Cruz had moved beyond it, this Abner Mares rematch Saturday on Showtime. Mares had done almost nothing to earn the do-over, while Santa Cruz had beaten a better fighter in Carl Frampton. You know what, though? The second time around was arguably better than the first, which ended with the same victor: Santa […]