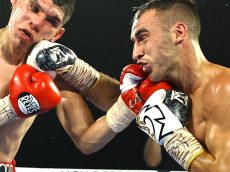 Before Andrew Moloney and Jason Moloney headlined separate ESPN cards this week, Jason and Andrew squared up against one another in a game of table tennis. Jason won. Andrew did not. That went for both the fighting and the ping-pong. The Australian twin brothers, Andrew first and then Jason, made their Las Vegas debuts, albeit […]