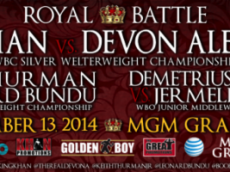 Here’s boxing in 2014, in a nutshell: Showtime, which had cast its lot with Golden Boy’s Richard Schaefer prior to the company’s split with him, has aired trash almost exclusively this year, yet is putting on a quality welterweight bout Dec. 13 between Devon Alexander and Amir Khan. The undercard bout between junior middleweights Demetrius […]