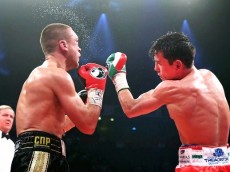 Six rounds in 28 months turned out to be insufficient prep-work for lightweight John Murray against his cross-town rival Anthony Crolla — who reached his peak in Manchester, Saturday. For a handful of rounds, Murray, in furious form, suffocated Crolla with a brand of total war that bordered on the psychotic. Crolla, though, showed courage, […]