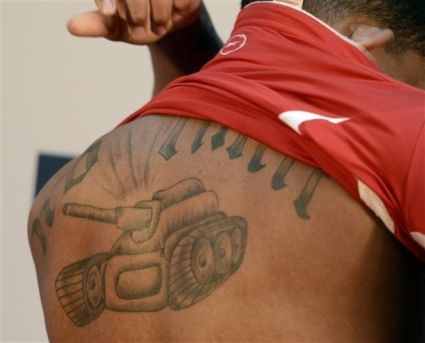 You’d be hard-pressed to make a fight between two boxers as criminally under-appreciated as Steve Molitor and Celestino Caballero. Together, they combine with Israel Vazquez, Rafael Marquez and Juan Manuel Lopez to give the junior featherweight (122 lbs.) division arguably the best starting five in the entire sport. Those three men are far better known, however. Which is one of the reasons Molitor and Caballero are fighting each other Friday night — despite television-friendly styles, they haven’t spent much time on TV in the United States, and if they want to cut their “under the radar” schtick, well, they need to get in front of more eyes.

This, of course, sounds like a job for Showtime. If there’s a fight that knowledgeable boxing fans are clamoring to watch — and they are clamoring to watch Molitor-Caballero — the spunky little competitor to HBO, nine times out of 10, is sure to pick it up and broadcast it. Showtime has fit it into their schedule, bless their hearts.

(It’s the first of three major fights this weekend, and because it comes first in order chronologically, it gets previewed first. We’ll hit Ricky Hatton-Paulie Malignaggi and James Kirkland-Brian Vera on other days.)

Molitor’s obscurity is in large part his own doing. The Canadian seems to keep stepping into one thicket after another with an array of promoters. The result is that it is difficult for him to fight in America, legally speaking. Some of his homebody behavior is because frankly, Molitor can make decent cash north of the border since he’s very, very popular there. It’s one of the reasons why Caballero is traveling to Canada for the fight; the money was going to be pretty good if the bout is not staged in the United States, because it’s probably going to draw nice live crowd.

Talent-wise, though? Molitor, by all rights, shouldn’t be obscure. He’s a slick-boxing lefty who once upon a time was content to outclass everyone he fought. In 28 wins, he has just 11 knockouts. But he’s turned up the power wattage considerably since winning a title two years ago, knocking out three of his last six opponents and nearly doing the same to a couple of the others. The ones he didn’t knock out? Scores read 118-109, 120-107, that kind of thing. Granted, some of the opponents were target practice, but that Molitor dominated them all pretty easily speaks well of his mentality and skills. He fights for Canada — his “Canadian Kid” nickname is kind of a promotional gimmick, since not all that long ago he was playing the role of bad boy — and for his brother, in jail for murder but the inspiration to Molitor’s boxing career.

Caballero is nowhere near as polished as Molitor. What he has going for him is something else entirely: He’s massive. I don’t mean his weight. That’ll be 122 pounds the day before the fight. I mean his height. At 5’11”, he may be the most circus-like specimen in the sport. He’ll have a four-inch height advantage over Molitor, and Molitor’s one of his tallest-ever opponents. He compounds the difficulty of fighting his awkwardly-sized ass by doing all other kinds of awkward things, like punching from unexpected angles, head-butting and more. And he’s a rugged fighter. He can cold knock someone out in the 1st round, and took a lot of bricks to the chin from Daniel Ponce De Leon, one of the hardest-hitting men in the sport, so he can take it just as well as he dishes it.

But for whatever reason, he’s not been seen much since handing De Leon his first loss. Maybe the clunker of a foul-filled affair he was a part of in August on Showtime is to blame, because that wasn’t very TV-friendly of him or his opponent. If he doesn’t sell tickets — and he doesn’t yet — then why would any top division draws want to get into the ring with a crazy-tall, foul-a-licious, big-punching walking stick who hasn’t lost a fight in four years? Enter Molitor. Each man is the ticket for the other to broader exposure and acclaim.

An aesthetically unsatisfying fight is not out of the realm of possibility. Caballero’s gangly arms are all over the damn place to create tangles with other limbs when he fights and it’s never pretty when he goes on a fouling binge. Both men are southpaws. Molitor has been more exciting than he was early in his career, but he’s not fought anyone as good as Caballero, so if he gets caught with something big, I wouldn’t be totally surprised to see him do some stick-and-run. Winning is the first mission, and to the winner goes two alphabet title belts. But neither man should forget what this fight is for, which is to turn himself into an attraction who will go on to bigger, better fights. My guess is that they realize it and Molitor mixes in some power shots with some stick-and-move, while Caballero chases him around trying to score a knockout.

My prediction: Molitor by decision. Molitor punches straight and fast. Caballero punches like he’s swinging a mace on a chain. I’ll almost always pick straight and fast over sloppy and hurtful. He’s also on his home turf, which really worked to the advantage of another recent Canadian fighter. And there are reports that Caballero’s having trouble making weight at age 32. Ontario also has some rules about how much more you can weigh the day of the fight that might neutralize some of Caballero’s size advantage. That’s assuming he can comply with those limitations at all — I’m slightly worried the bout might be canceled.

Confidence: 60 percent. When Miguel Cotto fought Antonio Margarito, I gave Cotto the edge because of his greater technical prowess, but the less conventional, harder-hitting Margarito won in the end. Molitor’s showed a pretty good chin, but I’ve also seen him hurt before. My sense, though, is that the gap in technical prowess for Molitor-Caballero is greater than Cotto-Margarito; that the chin of Molitor is greater than the chin of Cotto; and that the hardest punches of Caballero are still significantly less hard than Margarito’s, even to scale.

My allegiance: I once wrote a piece for The Sweet Science about Canadian fighters, and in the midst of my research I grew affectionate for our friends up in, as the Simpsons said, “America Jr.” So, Molitor.