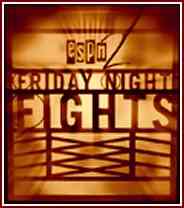 Say what you will about this season of ESPN2’s Friday Night Fights — I thought it was improved, others did not — it sure is closing strong. This weekend, by far its best card in a long, long time will go a long way toward healing the wounds of its worst card in a long, long time. If you’re still feeling turned off by Vivian Harris-Noe Bolanos on Aug. 14, the Aug. 28 alphabet title belt double-header between light heavyweights Tavoris Cloud and Clinton Woods and junior welterweights Randall Bailey and Juan Urango is some good medicine.