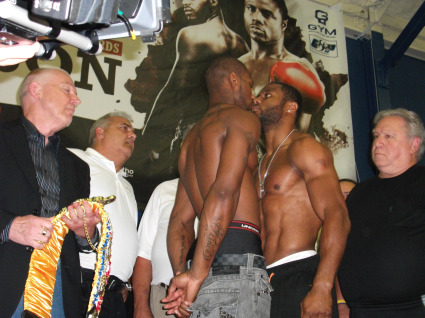 MONTREAL — Boxing weigh-ins are rarely a good place for news, unless somebody punches somebody else a night early. Rather, they’re a decent spot for getting info on the periphery. So, even though there was some amusing posturing at the weigh-in for the light heavyweight Chad Dawson-Jean Pascal fight Saturday evening (we’ll get to that in a minute), this will mostly be a collection of scraps and tidbits from interviews with Andre Berto, Larry Merchant and Gary Shaw.

First, the posturing. There was a mighty fine stare down between these two, as the picture above shows. Pascal was mean mugging, and Dawson was playing it cool. Then, after both posed with their fists out, Pascal took that moment to hijack the stage and stand in front of Dawson and flex. I actually like Dawson’s low-key, good-guy act, even if it’s a touch boring, but I like Pascal’s cockiness more. He’s a showman, through and through. Dawson just kind of stepped away, then afterward told the media, “It’s all good.” You can see part of that in the poorly-taken photograph below.

This week, the reports were that the fight wasn’t selling too well — 6,000 tickets, a bit more than the disappointing 5,000 or so Dawson did in his home state of Connecticut last time out. Tickets are a bit pricey, August is when a lot of people go on vacation in Montreal and the undercard sucks, so maybe that has as much to do with it as anything it might say about Dawson or Pascal. I asked Shaw about those reports. He said he expected it to get to about 8,000 tickets sold. “You always want more,” he said, but those are numbers he’s happy with.

“There are going to be 7,970 Jean Pascal fans and 30 Chad Dawson fans. That’ll be reversed after the fight,” Shaw, surprisingly unbejumpsuited, quipped.

He said it being for the Ring championship belt means something, since it’s lineal. Dawson, for his part, has downplayed his interest in any of the belts. “I don’t care about the belts,” he said. “I’m worried about what I got to do in the ring.” By the way, the words “Champion Breed” are shaved into the side of his head.

Merchant, the HBO commentator, said the fight made him think of the old light heavyweight classic between Archie Moore and Yvonne Durelle, as well as the super middleweight fight between Joe Calzaghe and Jeff Lacy. Moore-Durelle, he said, “was one of the best melodramas of all time.” (It was. And, of course, it was an American against a Canadian in Quebec.) “Are either of these guys capable of having a fight like that?” he asked, answering his own question in a way: “Nobody expects this to be Moore-Durelle.” It’s possible instead it could be a drubbing along the lines of Calzaghe’s beat down of Lacy, but in reverse — with the traveling fighter, Dawson, beating down the hometown fighter, Pascal. But, he said, there is more than one measure of greatness than a win. “One of the measures of greatness is, does the fight play in your mind like a movie or a play?” And Moore-Durelle does that. Merchant likes the idea of the winner facing Tavoris Cloud, rather than Lucian Bute, because of Cloud’s aggressive style. “He makes something happen. It may happen to him, but it’ll happen.”

Berto, the welterweight contender, was in town to support both fighters — Pascal is a native of Haiti, like himself, but he knows Dawson, too. “It’s gonna be a real good fight. It’s easy to ay Dawson might pull it off, but Pascal is a little different fighter than he’s used to,” he said. “Chad Dawson throws correct punches. Pascal’s very explosive.” Berto said for his part he was most interested in fighting Miguel Cotto. “It just seems like Cotto’s people don’t want to do it right now.” Berto acknowledged reports that he demanded a 50-50 split for a Shane Mosley fight, arguing that Mosley was coming off a loss and his “stock had dropped.” He didn’t have much to say about rumored opponents Andriy Kotelnik or Cornelius Bundrage, saying he’d let his team take care of it. His fashion highlight was a shirt that read “75 Percent Single.” “I gotta let these girls know, they still got a chance.” He was personable, even if he came off as having a higher opinion of himself than most do — for instance, he thinks Cotto-Berto would be the fight everyone would want most besides Floyd Mayweather-Manny Pacquiao (maybe he meant just at welterweight? If so, that’s true) and didn’t want to answer questions directly about taking less of the purse in order to make a fight happen and build his name.

Oh, both guys made weight. Nobody got the numbers down that well, surprisingly, and I mean nobody — not Pascal’s camp members, not other journalists, nothing. The acoustics were terrible in the gym and it was pretty loud, so, 174.1 and 174.2 was as good as it got for anyone’s collective intelligence on the matter.