Joe DiMaggio and Sugar Ray Robinson. Joe Louis and Babe Ruth. The Mick and The Greatest. Rocky and Yogi. Zale-Graziano I and the Pine Tar Incident.

Boxing, baseball, and Yankee Stadium – together, they recall the formative years of American sport, the Golden Age of my generation’s grandfathers, as intrinsic to our history and culture as apple pie, entrepreneurship, and novelty songs.

Baseball and boxing may not assume the same lofty status they did when televisions and water fountains were black and white, but to paraphrase an overused quote from another American great (who is also making a splash long after his heyday): rumors of their demise are greatly exaggerated.

The two sports rarely command the 50-point type newspaper headlines they once did (except when steroid allegations arise, naturally) but, then again, who reads newspapers these days?

I have seen a lot of boxing, mostly in the past few years, and I have spent a lot of time at Yankee Stadium, mostly in the old ballpark. I’ve been to at least 50 Yankees games in my lifetime, probably many more. I’ve seen playoff and World Series games and meaningless games in May. I’ve seen dramatic comeback wins and deflating blowout losses. Steve Sax once hit a ball in batting practice that Greg Cadaret flipped up into the stands to my father, the closest I’ve come to catching a foul ball. I’ve sat in the upper deck, I’ve sat in the outfield, and I’ve sat three rows behind the Yankees dugout. I watched a tense September game against the Baltimore Orioles in the mid-1990s (yes, the Orioles once played meaningful games) in the Nabisco luxury box, a few rows behind the Nabisco president and his kids, all Orioles fans, when the Yankees won on a walk-off single by future clubhouse thief Ruben Rivera. My dad also took me as a surprise to see the retirement of Don Mattingly’s number (maybe we sat next to Dan Rafael and didn’t even know it), still my favorite memory with my dad to this day, as he clearly recognized how important the retirement of my favorite childhood player was to me.

Saturday was my first occasion to visit the Stadium for something other than a Yankees game: the junior middleweight fight between Miguel Cotto and Yuri Foreman. It was both jarring and exhilarating to see the towers erupt from the brilliant outfield grass, the blue and white folding chairs surrounding the ring, which reflected an electric blue under the bright sun when I arrived, and the JumboTron flashing highlights from past Top Rank fights, as opposed to old Yankees highlights. It was an unusual mixture of the familiar and novel, a trip I know like the back of my hand to a destination I have never quite seen before. It was like going to an old friend’s house and finding a circus tent set up in the living room – it was surreal.

It was also unlike any fight I have ever attended. I could not help getting swept up in the atmosphere, the palpable excitement that swirled through the concourse and spilled out onto the field. Despite previous curmudgeonly grumblings about boxing fans less interested in fights than atmosphere, I was completely swept up in the ambience. I spent as much time watching the giant HD JumboTron as the ring, not only because it was easier to see what was happening in the fight but also because it was so damn cool. I snapped pictures on my camera phone throughout the night, trying to get the right composition of the ring, the Stadium sign, and the clear night sky, an ultimately futile attempt to capture the disparate elements that made the night so special in a single image.

As the main event unfolded, first as a better-than-expected fight, then as a spectacle of bad luck, tremendous courage, and bizarre officiating, what had begun as a historical footnote – the first fight in the new Yankee Stadium – developed into a historical landmark thanks to the strange but stirring events in the ring. We may call it the Towel Fight or the Battle of the Wounded Knee (anything but TowelGate; the –Gate suffix needs to go), but to the thousands in attendance and the millions watching around the world, it was an unforgettable event on hallowed sports ground.

To the list of Joltin’ Joe, Sugar Ray, the Bambino and the Rock, this generation can now add Mariano and Miguel, the Dive and the Phantom Towel, as baseball, boxing, and Yankee Stadium continue to weave indelible threads of majesty into the increasingly complex fabric of sporting history. 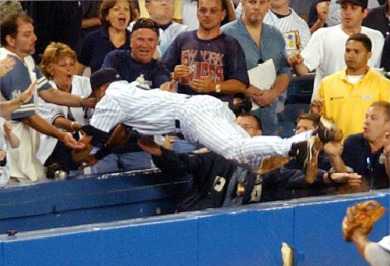 Since Tim did an awesome job on the undercard and I was feeling exceptionally unmotivated this weekend (I thought I had mono, but it turned out I was just really bored), I eschewed my usual Jersey Fight Journal-style write-up to do this instead. However, a few thoughts on the card… It was a great privilege to meet Tim for the first time, although if he was going to stop by with a tray of food, he could have offered me a fry or something… Referee Sparkle Lee didn’t shine in the first fight (maybe I should have just eschewed this section too, while I was eschewing things), but the fight itself was fun… Juan Gonzalez the undefeated lightweight prospect is no Juan Gonzales the former two-time AL MVP, but he did more than enough to get the win in another entertaining fight… I’ve seen featherweight Jorge Diaz on at least three or four cards in the area and he never disappoints. He may or may not be a top fighter in the future but he has TV-friendly written all over him…. I had nothing to say about Abner Cotto-Edgar Portillo (lightweight) or Terry Buterbaugh-Tommy Rainone (welterweight) on Saturday, and I have nothing to say about them now… Isn’t junior middleweight Pawel Wolak just John Duddy without the excess hype and overzealous fans? And since Duddy adjusted his style to become more of a “boxer,” isn’t Wolak a lot more fun to watch, too? I think his pressure would burst Julio Cesar Chavez Jr.’s pipes, something I don’t think Duddy will do… I used to be really, really high on junior middleweight Vanes Martirosyan. Now I’m not so sure. I’m not hopping off the bandwagon, but I’m grabbing a seat by the window, just in case… I was listening to Tony Paige on the radio on the ride home and his guest (not sure who it was) referred to the undercard as lackluster, so I’m pretty positive he didn’t show up until Martirosyan-Joe Greene, because the rest of the card was very good… I’ve been to a few star-studded fights but never had as many celebrities walk directly past me as I did on Saturday: Max Kellerman, Paulie Malignaggi, Tony “Paulie Walnuts” Sirico, and the great Tommy Hearns, just to name a few. Plus, I spotted Carrot Top milling around. Watching a boxing fight at a baseball stadium with Paulie Walnuts and Carrot Top – if it was a dream, Dr. Melfi would have had a field day…