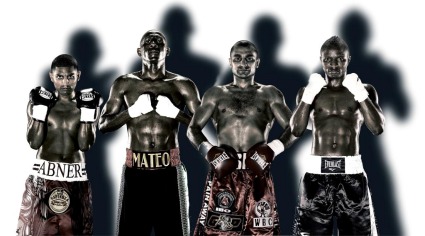 Long live the Showtime tournaments. Saturday inaugurates the second installment in the network’s recent tourney binge, a bantamweight series that takes the super middleweight series and boils it down to four people instead of six, and four fights to the end instead of a round robin with semifinals and finals. They couldn’t have picked a better division for a sequel, either. The four men fighting Saturday — Yonnhy Perez vs. Joseph Agbeko II, Vic Darchinyan vs. Abner Mares — are talented, proven fighters, each with a history of making exciting fights, in several cases against one another, in a weight class overflowing with talent. And now they’re going to do it again and again and again and again, then stop. I like the round robin format of the Super Six, but this works great, too, especially since Fernando Montiel and Nonito Donaire turned down the chance to enter. With those two tentatively scheduled to face off early in 2011, the winner of that bout and the winner of the Showtime tourney could be fighting for divisional supremacy by the end of the year. Bladow.

Over on HBO Saturday night, junior welterweight Amir Khan can make the world his oyster if he can overcome doubts about his soft chin against one of the hardest hitters in all of boxing, Marcos Maidana. Khan’s as physically gifted and well-schooled as anybody, except for, potentially, that chin of his. And Maidana can stake a claim to be one of the three best men in the division with all that crude power of his by knocking off Khan. Here’s the thing: Last time a much-ballyhooed young Golden Boy-promoted junior welterweight was going into this kind of “final test/world’s his oyster/just has to hold up against a big puncher” scenario, it was Victor Ortiz, and the man who did him in was Maidana. And wouldn’t you know it, there’s Ortiz on the undercard of Khan-Maidana, trying to come all the way back from that devastating loss against Lamont Peterson, himself a talented youngster with one loss on his record. Khan-Maidana is the more interesting fight dramatically speaking, but Ortiz-Peterson is probably the better one action-wise.

Overall, that’s a lot of bang for your buck for one Saturday night, but that’s boxing’s screwed up don’t-give-fans-jack-for-the-first-10-months-then-jam-it-all-into-the-last-two 2010 for you. (Truth be told, these fights deserve more than one giant blog entry, but your TQBR proprietor is galloping on fumes to the finish line of the year.)

[TQBR Prediction Game 5.0 is in effect for all four fights. Due to the lateness of this post, you have until 9 p.m. ET — the start of the Showtime broadcast — to make your predictions. Remember (the rest of) the rules.]

Who doesn’t remember last year’s Fight of the Year nominee between Perez and Agebko? It featured an almost comical number of punches thrown. They came at a pace roughly similar to the noise of each individual poker card during a rifle shuffle. While every round was competitive, Perez clearly got the better of the action, enough to win a clear decision from the judges, with a fluky knockdown — Agbeko turned his back on Perez after a head butt, then Perez threw a body shot and Agbeko dropped — not at all the deciding factor.

In that fight, Perez was the sharper, more accurate technician and the busier of the two busy busy busy men. Since then, Perez went on to fight Mares to a draw earlier this year. Agbeko has been out of action for more than a year since the Perez loss. So what might be different? Agbeko could be rustier. He could also be better. Agbeko has grown in his last several fights, including the win over Darchinyan and the loss to Perez. Less and less, he resembles the wild slugger of old. Agebeko also might adopt a potential lesson from Perez-Mares: Mares said this week he was able to outwork Perez late because he invested in a lot of body punches early. And either man could be feeling the wear and tear of grueling recent fights.

That’s still a fair amount of ground for King Kong Agbeko (his actual birth name, no kiddin’) to make up. I had Perez winning eight of the 12 rounds of their first fight, and two judges had it nine rounds to three. He needs at least two more than the first time to get a draw, which, if you’re wondering, would lead Showtime to pick which fighter moves on to the winner’s bracket. But I don’t think it comes to that. Give me Perez in the rematch by a slightly closer unanimous decision. And count on it to be another action-packed 12 rounds.

In this fight, Darchinyan is the prickly, wily veteran whose unconventional style is at its best when it’s a more controlled distillation of raw, natural power. Mares is the young, gifted prospect who matured from entertaining and promising boxer-puncher to true fighter in a draw against Perez that many thought he deserved to win, however narrowly. Mares is saying he’s going to go right at Darchinyan aggressively. Darchinyan is saying he’s going to be the smart version of himself, not the crazed, proud brawler who can be forced off his plan to box.

Darchinyan definitely has the edge in experience. It’s unclear if he has the edge in power. At bantam, Darchinyan has found knockouts harder to come by than at junior bantam or fly. Running into the iron-chinned Agbeko could explain some of that, as could injuring his patented left hand in his most recent bout. But I think he’s legitimately not as strong a puncher at 118 than lower. Even the version of Darchinyan that outboxed the technically sound Cristian Mijares — however much he lurched around like a crazed crab in that one, too — still isn’t as technically sound as Mares. And I don’t think Darchinyan will be faster than Mares, either. Lastly, Mares has shown he can keep pace with a volume puncher in Perez, so

All that Mares needs is for his chin to hold up, and he proved he had a good one against Perez. But if he gets too bold, he could find himself in trouble. I like the idea of Mares taking the fight to Darchinyan, which is likely to force him into a brawl where he’ll revert to wild crab man. Then, I think Darchinyan makes a mistake and gets caught, a la Nonito Donaire. I’ll pick Mares — a fighter I’m very high on — to win by knockout, say in the 8th. Not that I don’t still love big-mouthed, big-punching Vic, too.

All four of Saturday’s major bouts are extremely well-matched with any outcome highly plausible. Of them all, Khan-Maidana is the hardest to predict. It’s because for as all-world as Khan’s talent is, Maidana has the kind of power where one punch can knock someone out. Add in Khan’s well-known 1st round KO loss to Briedis Prescott, and Maidana’s struggles with quick, skilled boxers, and anything can happen — except, probably, a unanimous decision for Maidana.

Khan’s chin isn’t good, but I don’t think it’s quite as bad as it’s made out to be. He and trainer Freddie Roach agree that he’s better at 140 pounds, and that his chin problems came from such a tall frame struggling to get down to lightweight. Khan probably wouldn’t be able to even spar with the extremely hard-hitting Manny Pacquiao if he had an F minus chin, but he reportedly holds his own. And too much has probably been made of Maidana’s shaky outing against Demarcus Corley, a capable vet who gives a lot of fighters trouble in his old age. Also, keep in mind that Maidana was visibly in worse shape against Corley — whom he might have taken lightly — than he will be against Khan.

Khan has said he’ll take the fight to Maidana, and he might have to. Maidana is relentless, so running and hiding can’t last forever. Khan might have to hurt Maidana to get some respect early, and let’s not forget that Maidana is hurtable himself, as Ortiz proved with a couple knockdowns. I’m reasonably confident Khan can stay out of harm’s way with his length and speed, and hold up to what little Maidana lands. I worry more about what Maidana, a dirty fighter, will do in clinches. Assuming things stay mostly clean, I’ll take Khan here by late stoppage in the 11th.

Ortiz has been slowly working back into contention from the Maidana loss with a number of confidence-building and trait-sharpening wins, and now appears like a more cautious, technical version of his quick-fisted, hard-hitting self. Peterson has just one get-well fight under his belt since his loss to Timothy Bradley, but Peterson acquitted himself well against Bradley — the class of the division — so his wasn’t as disastrous a first loss as Ortiz’.

Both men are fast here, and both men can box well, so things match up fairly evenly in that regard. Peterson is longer-armed and probably a bit better defensively. Under fire early against Bradley, Peterson fought his ass off, maybe too much, because he got off his game plan, too. But he’s got the heart edge for that reason. Ortiz’ heart will be pissed upon until he proves himself in a sticky situation, given how he quit against Maidana. Where Ortiz really has the edge is in power — he has fight-changing stuff, while Peterson only has knockouts in half his wins despite mostly fighting journeymen.

This is a good boxer-puncher match-up that might have some lulls but also could feature some educated exchanges. The difference is that in the boxer-puncher equation for both men, one is clearly the better puncher. When those educated exchanges happen, look for Ortiz to get the better of things. He won’t pour it on until things are totally safe, but they might be safe enough by the 7th round for Ortiz to score the knockout.