It’s not Gus Johnson calling a boxing match, but the above video (NSFW?) does ring familiar for those of us accustomed to listening to him on Showtime.

In these Quick Jabs, we take the subjects in the headline and mix it up with some other tidbits and some fights in the works (Peterson brothers! Showtime and ESPN2 coups! Some suckiness!) and out comes a hearty stew of… um… fists? That metaphor got away from me. I’ll be more discplined going forward, promise.

In my preview of Roy Jones-Bernard Hopkins II, I left out any mention of what kind of financial disaster it might be because at last report, Ring’s Doug Fischer suggested it might do well. But the evidence this week is no good. Did you know Jones may not make any money — aka $0 — from the fight? Hopkins gets the first $3.5 million, and Jones would get the second $3.5 million, but there are doubts whether there will even be a first $3.5. Ticket sales are reported to be extremely weak. Unlike for the last news conference, there were few reporters attending the most recent one. Golden Boy Promotions has pointed out it starts after the Final Four games and that there will be no free replay on HBO the next week. Jones has taken to hyping the fight on the prospect he could be badly hurt (at least that’s what Kevin Iole infers), or in a kind of “you owe us” way, as though Jones’ fans haven’t given him many of their hard-earned dollars. It’s a touch depressing. Months ago I’d complained that we’d get this fight that nobody wanted, but Floyd Mayweather-Manny Pacquiao was just too much to ask for, wasn’t it? Earlier this week, I wasn’t beating up on that point. Now that I know boxing’s down this week, I’m at least giving it a rabbit punch…

From the very beginning, I’d said I was excited about the Super Six tournament, but it would be unwise to project it as the thing that would “save” boxing. I thought last weekend’s compelling turn of events would get the Super Six naysayers off the super middleweight tourney’s back, but no such luck. There were several strange articles about a media get-together with Showtime’s boxing boss the promoters of the event. The AP’s Dave Skretta writes, “public interest has waned” then quotes Showtime’s Ken Hershman saying the exact opposite — ratings are up, media coverage is intense. Skretta explains that last weekend’s fight was a “microcosm of boxing, which finally came up with a novel idea only to have it beset by trouble,” then immediately quotes Lou DiBella explaining (correctly) how it’s a microcosm of things moving in the right direction, actually. If you’re going to make a point that’s contradicted by everyone you quote, you’ve at least got to present some evidence that your point has some kind of reality to it other than what you read into it. If interest is down, show us why Hershman is wrong when he says ratings are up. The New York Daily News’ Mitch Abramson writes that “a tournament that was supposed to be a cure-all for the sport is looking like business as usual.” How? Don’t you have to back that up somehow? Because somebody got a knee injury? Is it realistic to think nobody would suffer an injury? Is that “business as usual?” Wasn’t the potential for that contemplated very, very early? Isn’t it still pretty much NOT business as usual that all these promoters continue to reach fundamental agreement on difficult fights? And I don’t remember anybody other than writers suggesting that the tournament could be the “cure-all” for boxing’s ills; I just looked through the original news conference quotes from July and I can’t anyone billing it as that…

Heh, well, anyway, if you want to see “business as usual” and other things that won’t cure all of boxing ills all at once, you can watch scenes of Andre Dirrell in the hospital following his disqualification win over Arthur Abraham in the “Fight Camp 360” episode that airs Wednesday on Showtime, per a news release. The various Andre Dirrell “Truthers” will no doubt find more evidence that Dirrell was fakin’ it. (I kid. You “Birthers” know I love you.)…

Conflict of interest department: Did you know that bantamweight Abner Mares’ dad co-manages Yonnhy Perez, the man his son is fighting in May (per BoxingScene [computer health issues apply as usual])? Or that Judd Berstein, the lawyer who’s defending Oscar De La Hoya in the Manny Pacquiao defamation suit, once represented Pacquiao? Or that trainer Manny Steward, who was working with junior middleweight Yuri Foreman, has switched sides is now officially working with Miguel Cotto (in what may be something of a strange fit given Steward’s “fight tall” style, but is a big upgrade over previous trainer Joe Santiago?)…

Tommy Hearns (a former Steward protege) is selling all kinds of things Saturday to square up with the IRS. It’s sad and sad and more sad, and only moderately less so because of the jokey picture below. But, here’s where you can buy up… 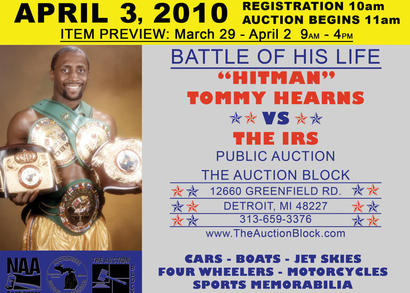 David Tua reportedly made easy work of Friday Ahunanya earlier this week. Now, I’d like to see Tua fight someone who’s in the division’s top 10 or at least close to it…

When I saw an news release in my e-mail inbox that announced a fight called “The Weight Is Over,” I thought it was announcing Joan Guzman’s fight already. It turns out it’s a fight in only the slightly larger junior middleweight division, between my boy Paul Williams and Kermit Cintron. Cuz Willimas is a natural welterweight, see?

There are a series of fights that may or may not happen after this weekend. Hopkins wants the winner of David Haye-John Ruiz at heavyweight. But at the same time, Golden Boy is palling around with Joe Calzaghe in case he considers a comeback, and likes the idea of Calzaghe-Hopkins II. The winner of Haye-Ruiz, though, wants a Klitschko brother. Vitali says Wladimir wants him first, but Wladimir also has a mandatory title challenge due to Alexander Povetkin. Reportedly, though, Klitschko called off talks with Povetkin. I hope this gets sort out in a way where Haye fights Klitschko and really, I could care less about everything else.

If Juan Manuel Lopez makes it past Bernabe Concepcion on July 10 (which Showtime is expected to air, strangely, considering how much HBO has invested in Juanma), then the plan afterward is to try to fight the Israel Vazquez-Rafael Marquez IV winner. But given the way those two fight each other, they could be on the shelf with injuries for another year, if they’re able to continue their careers afterward at all.

Back to the Super Six for a minute: Andre Ward vs. Dirrell is tentatively booked for Sept. 25, which is pretty shortly after Ward fights Allan Green on June 19. No reason it can’t be done, but it’s unusual in boxing these days. Also, they have to resolve where the fight will be — Dirrell promoter Gary Shaw wants it anywhere but Ward’s hometown of Oakland, although Ward had arranged to have all three of his fights there. At this point, it strikes me as too little and too late, and there’s more money in Oakland anyway, so Dirrell and crew might as well bite the bullet.

Devon Alexander vs. Marcos Maidana is in talks for August on HBO. Good fight.

ESPN2 scored a nice May 28 card for Friday Night Fights when it goes to Canada for both Librado Andrade-Eric Lucas and Sakio Bika-Jesse Brinkley. It’s a pair of nice super middleweight fights and ESPN2 is once again to be commended for several solid events so far in 2010.

At long last (in terms of time, not in terms of anticipation), John Duddy and Julio Cesar Chavez, Jr. are set to fight June 26, likely in San Antonio. Might it be good, where it lacks importance? Sure, although not based on recent performances by either man.

Robert Guerrero will fight Roberto Arrieta — who recently lost a junior lightweight eliminator — on the April 30 re-debut of Solo Boxeo in what amounts to a tune-up. Two things about this: Guerrero’s wife is doing better (her cancer had returned), so that’s good news. And it looks like Guerrero will stay at 130, which I think may be about as high as he should go.

Erik Morales is looking to fight Juan Manuel Marquez at 144 pounds. Marquez is like, “maybe,” but wants to fight someone who’s not a walking deadman if he can.

Peterson Bros. news: Lightweight Humberto Soto will fight Ricardo Dominguez May 15 on Fox Sports Net, then would fight Anthony Peterson on July 24 if he won. And welterweight Mike Jones is looking for a fight June 5, and it could be a catchweight bout against junior welterweight Lamont Peterson.

Top-10 heavyweight Tony Thompson lost an opponent for next weekend’s FNF when Jason Estrada pulled out citing an ankle injury, but it looked like Thompson might end up with a quality replacement in Cedric Boswell. But Dominick Guinn was also in the picture, and then Owen Beck is who he ended up with. You can’t salvage them all, is the story here I guess.

Gennady Golovkin and Anthony Mundine may fight at middleweight for some version of some title belt. Golovkin, whom some people like a good deal, would be more “live” than most of Mundine’s recent opponents. I chose to focus on the progress.

Heavyweight James Toney and Jonathon Banks have exchanged words about a fight on Showtime. To be honest, I’m not sure how this fight was worth me mentioning.

(Round And Round: FightHype; RT; ESPN; Maxboxing; BoxingScene)