You have to hand it to Uncle Bob on this one: The wily old promoter has taken a moderately interesting fight between a light-punching junior middleweight and a potentially war-drained welterweight and turned it into an event, a regular media sensation, even.

Arum’s boxing brand of identity politics has its critics — sometimes, I’m among them — but combining the light-punching junior middleweight, Yuri Foreman, who’s a hit with Jews, and the potentially war-drained welterweight, Miguel Cotto, who’s a hit with Puerto Ricans… that was a brilliant combination in New York City, where the fight is Saturday. That it’s in Yankee Stadium, which hasn’t hosted a boxing match since the 1970s when Muhammad Ali and Ken Norton fought for a third time, made it a surefire story in the media-saturated city, to the point that all sorts of unusual publications have found a way to cover it. That Foreman is a walking story by himself — boxer by day, rabbinical student by night, husband to a model/boxer, Israeli import who boxed in Arab gyms — assures yet more media fascination. That it boasts a significant undercard should please the purists. And all sorts of little things hold everyone’s attention besides: an HBO camera following the Orthodox Jew Foreman by helicopter as he makes his way to the arena after sunset; a bar mitzvah that got moved from its Saturday date at Yankee Stadium but with the aww-shucks kid getting tickets to the fight; tons of boxing journalists being in town for the Boxing Writers Association of America awards dinner; legendary trainer Emmanuel Steward taking over in Cotto’s corner; and more.

But now that the event has been created, the fights have to happen. Cotto has been one of the most reliable action stars in the sport for his entire career, turning in Fight of the Year nominee after Fight of the Year nominee since 2005. Foreman once was a punchline, the particular kind that boxing fans love to hate for producing so little action in the ring, but his last couple fights he’s shown more interest in offense and as such his reputation is on the rebound. That doesn’t mean we’re guaranteed excitement for this fight, though — the most interesting element might be whether Cotto has anything left from all those wars and whether Foreman can beat someone as accomplished as him. The other fight in the HBO doubleheader, between prospects-turning-contenders Vanes Martirosyan and Joe Greene, has as its main point of intrigue that two young undefeateds are squaring off; both have been electric at times, although Greene has been in some ugly bouts, too. The object here will be to evaluate the two main fights themselves, beyond their potential for spills and chills. 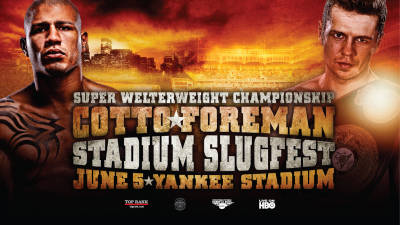 Arum calls this fight 50-50. It’s an eyebrow-raising thing for him to say, and it makes me wonder if something’s up, which I’ll touch on at the end. But the way I see it, he’s not far off.

Cotto, at 29, has not only a career of wars behind him — Ricardo Torres, Zab Judah, Joshua Clottey — but in 2008 and 2009, he took the kind of career-shortening beatings against Antonio Margarito and then Manny Pacquiao that by themselves would make you wonder if he might be but a shadow of his former self. To hear Steward tell it, Cotto’s been anything but a faded force in training camp. The word he keeps using to describe Cotto how Cotto’s doing is “energy.” He also keeps talking about how he’s improved Cotto’s balance and that will make a huge difference to his ability to hit and not get hit, although I can’t think of many people who have thought Cotto’s balance has been a problem. Steward also says Cotto’s power is excellent at junior middleweight, something many have wondered about given that he’s kind of smallish for the division. Some wonder — myself among them — whether Steward is a good fit for Cotto, since Steward specializes in lanky fighters who box from a distance, not squat tanks like Cotto who want to get inside and work their opponents’ bodies. But maybe Steward will be an improvement over Cotto effectively training himself his last few fights after a falling out with his uncle-trainer, and Steward says he’ll be getting Cotto back to his old self.

Cotto’s old self — his strengths make him exciting, but so do his weaknesses. He is a powerful puncher, particularly to the body with the left hook. The way he used to wear down opponents was as impressive as it was cruel, what with that slow cranking up of the pressure to the point that you winced by about the 8th round at the punishment his opponent was taking. But he can box, too. He’s able to accurately target with his jab, and can even counterpunch going backwards for stretches. His defense and chin have been liabilities, though. He gets hit a lot, especially with the uppercut as he bends down, and sometimes he goes all the way down, albeit usually against the biggest of the big punchers. Against all but two fighters, Margarito and Pacquiao, he’s gotten back up, shaken off the cobwebs and found a way to win, a tribute to an internal fortitude that never fails to humble me but sometimes gets Cotto in harm’s way for longer than is healthy. Today, by virtue of his achievements, I have him just outside my top 10 list of the best fighters in any weight class, but it’s an ugly thing, pondering whether the sacrifices he’s made in the ring have rendered him a good deal less than one of the 10 best in practice.

Foreman only recently convinced anyone he was even among the top 10 in his weight class, beating a weight-drained Daniel Santos on the undercard of Pacquiao-Cotto last year to become the first Israeli to win an alphabet title. But he’d beaten some decent fighters before that, too, like Andrey Tsurkan, Saul Roman and James Moore. That he beat Tsurkan and Anthony Thompson by split decision was concerning, and few had picked him to beat Santos. But he outboxed Santos and even outpunched him, dropping him twice. How much of that had to do with Santos struggling to make 154 pounds and how much of that had to do with Foreman’s skill can’t be said with absolute certainty, but it’s fair to say both played a role.

For Foreman to drop anyone is rare. He has eight knockouts in 28 fights, and none of those KOs have come in the last four years. Steward argues that Foreman hits harder than people think, but I don’t see it. What I do see is a skilled boxer, especially on defense. Foreman moves constantly and has a good sense of when his opponent will throw a punch, and when you get inside on him, he ties you up. When you do hit him, he stands up to it well, something that will come in handy against Cotto. Offensively, as you’re coming in, he uses his length to jab and counter, mostly with his right hook. I get the impression people don’t like fighting him. He’s elusive and frustrating, and while he has shown a tendency of late to press the action a bit more, he’s still doing a lot of hitting and running.

Mostly, though, I think this fight is about Cotto. The 5’7″ Puerto Rican showed he can beat up crafty, nimble-footed boxers when he whooped Paulie Malignaggi. He’s shown he can beat up taller opponents, like when he whooped Kelson Pinto. But he did both those things when he was younger, with much less wear and tear than he has now. Here’s my question about Arum’s motives in calling it a 50-50 fight: He’s made no bones about the pride he’s taken as a Jew in Foreman’s success. Would he put Cotto in with Foreman if he thought Cotto could deliver one of his old school beat downs to one of his cherished favorites? I doubt it.

But I’m going to go against my cynical impulses and go with the established candidate. Foreman’s best win has an element of doubt about it, but either way he’s not proven he can beat anyone half as good as Cotto at his best. Even if Cotto’s at 75 percent of his best, I think he can pull out the win. But I’m betting he’ll do it by decision, not knockout.

When last we saw Martirosyan, he struggled to beat Kassim Ouma, who was left for dead after a series of losses and poor efforts. The last time Greene got in the ring, against the 12-11 Chris Gray, he struggled but won, too. That’s not usually a recipe for an interesting fight, but this figures as the toughest competition of either man’s professional life, and both 24-year-old talents really could use a win like that.

Greene is the better physical specimen, certainly faster and maybe more powerful. He’s also a southpaw, something nobody likes. He’s been able to use his athletic gifts to beat people who give him trouble, like Jose Miguel Torres, whose strategy was to foul Greene into submission. It’s not the only fight where he’s looked shaky, but when Greene is good, he’s good. He’s versatile on offense — his team says he will pressure Martirosyan, but he’s also played counterpuncher before — and sharp on defense. But he does get reckless, and frankly he’s not been impressive against some weak opposition at times. His best win may be over Delray Raines, but Greene went to a decision against an opponent who’d been knocked out by far lesser-regarded prospects.

Martirosyan has been more consistent, the Ouma loss aside. And he’s fought the better opposition by far. His fourth or fifth best win — let’s say, Billy Lyell — may trump Greene’s best. Where he gets high marks is accuracy. He has passable speed and power that’s proven against opponents who have been sturdy, but he’s more a smart fighter than a physically talented one, although he’ll have a height advantage over Greene at 6′ to Green’s 5’10”, plus Greene fights smaller than his listed height. Against Ouma, Martirosyan did indeed have trouble with Ouma’s pressure. But he says he’s learned from the fight. It’s not out of the question that he grew into a better fighter because of that challenge.

Both men have been down before, and if the fight goes the way Greene’s team says it will, I think we could see one or both men down. Greene’s pressure, speed and (maybe) power can put Martirosyan down, and Greene’s spurts of recklessness when he gets aggressive can maybe send Greene down, too. Part of me wants to go with the specimen here, but I’m going to pick Martirosyan by knockout, because Greene’s inactivity of late and his difficulties with weak competition concern me.

[TQBR Prediction Game 2.0 is in effect. Don’t forget the rules.]