In the wake of Floyd Mayweather’s career-best win over Shane Mosley, the eyes of the boxing world are once again fixed on the possibility of Mayweather and Manny Pacquiao settling the question of who is the best fighter of this generation in the ring.

We’ve been down this road before and I don’t care to speculate as to whether a solution to the drug-testing conundrum can be found. What I am interested in here is that they are the two biggest stars in the sport and the two best fighters in the world, and both fight at welterweight and enjoy a level of mainstream popularity unheard of in boxing today.

Yet beyond these similarities, the two men could not be more different. They could not have taken more divergent paths to the top of the sport than they did. And fan and media response to their claims to supremacy are both passionate and strongly debated.

In the realm of professional sports, it is rare for the distinction between the “good guy” and the “bad guy” to be so clear cut. Sure, most baseball fans might hate the Yankees, but it’s not like Derek Jeter and Mariano Rivera go around waving their World Series rings around in angry fans’ faces and proclaiming themselves better than Babe Ruth and Cy Young.

On the other hand, Mayweather and Pacquiao are borderline caricatures of the “black hat” and the “white hat,” the bad guy and the good guy. When Floyd isn’t telling us how he is greater than Muhammad Ali and Sugar Ray Robinson, he is telling us how much money he has or why his opponent is a chump. Mayweather likes to brag and to instigate, and he has become very good at both. His bad guy persona has elevated his popularity immensely and made him a crossover star and the biggest draw in boxing. How else could a fighter with his style routinely garner pay-per-view buys in the neighborhood of a million or more? (“Say hello to the bad guy.” At least Floyd doesn’t flick chewed toothpicks at fans during his ring walk.)

Oh, that style. For every PPV buy that Mayweather draws, he elicits a column lamenting his “safety-first” and “boring” in-ring style. For every begrudging compliment he earns, a critic compares watching him fight to watching paint dry or grass grow or a marathon of The Hills.

However, while others ruthlessly criticize the style of Mayweather, I admire it. They claim that he will never attract casual fans with his style, yet I was a casual fan of boxing up to the day that some friends ordered Mayweather’s fight with Arturo Gatti on pay-per-view (a fight for which Mayweather was criticized by boxing scribes) and I was transfixed by his complete dominance and otherworldly skills. That, combined with a few other circumstances, rapidly transformed me from “casual fan” to “hardcore devotee.”

To put it simply, Mayweather is a virtuoso. He is to boxing what Yo-Yo Ma is to playing the cello, what Tiger Woods is to hitting a pitching wedge, what Cirque de Soleil is to freaky, psychedelic French circuses. He has devoted his life to his craft and has perfected that craft in a way that no man can match. His performances inspire humble awe, not ebullient excitement. He is almost too good at what he does for his reputation – he makes things like his undefeated record and his whitewashing of Mosley lack the resonance of, say, Pacquiao’s destruction of Oscar De La Hoya, because we simply expect Mayweather to dominate each and every time. Plus, he talks about his greatness all the time, making us wish it wasn’t so. Mayweather has become the straight-A student whose perfect tests are shrugged off while his A-minuses are picked apart, just because he can’t stop talking about how he’s smarter than Albert Einstein.

Then, we have Manny Pacquiao. Inside the ring or outside, there is really nothing to dislike about Manny. Inside the ring, he is a force of nature, a preternaturally skilled fighter who dedicated himself to matching his natural gifts with a thorough understanding of his craft. He developed from a raw, breathtaking fighter to a breathtaking fighter with elite skills under trainer Freddie Roach.

Outside the ring, he appears to be a humble, generous man, given to spending time with his very large circle of friends and family (I hesitate to call Buboy and the crew an entourage). He also seems to genuinely care deeply for the Filipino people, evidenced by his efforts to become a part of the Filipino political machine in order to help his countrymen. He is also one of the worst singers I have ever heard and, while I admit to not having seen the movie, is there any chance that Wapakman is entertaining on any level other than “unintentional comedy?”

Why Radiohead? Prepare for one of the most extended, awkward metaphors in history. Radiohead had some early hits in 1993 with “Creep” and “Anyone Can Play Guitar,” but if you told anyone at the time that they would someday be the biggest band in the world, you would have been laughed at. Same goes for Manny’s early career, where wins over Chatchai Sasakul and Lehlohonolo Ledwaba gained him some notoriety but few saw a future pound-for-pound king.

Both burst to prominence in a flash of unexpected greatness. For Radiohead, it was The Bends, their second album, an instant classic that suddenly alerted the music world of a talent to be reckoned with. For Manny, it was his annihilation of the great Marco Antonio Barrera. Both responded to their initial brushes with greatness with hunger rather than satisfaction. Radiohead followed The Bends with OK Computer, arguably the definitive post-grunge rock album of the decade. Manny followed the Barrera fight with his epic draw with Juan Manuel Marquez, a rousing trilogy with Erik Morales, and victorious rematches with Marquez and Barrera.

What was the point? Basically, to reiterate, Manny Pacquiao is a rock star. He thrills his fans, bringing them to their feet and prompting them to scream their support. He performs for the people, and the people love him for it. He is exciting and dangerous and beloved.

Floyd Mayweather, meanwhile, is a maestro. He awes his fans, prompting them to gasp, wide-eyed, in admiration for the impeccable application of his craft. He performs for himself, in search of perfection, before audiences split between those who admire his elegance and those who wish for someone to put on a real show.

One man is a perfectionist, the other a populist. One shreds. The other composes.

Now, the world waits with baited breath for the two greatest fighters in the world to finally make music together. If it is anything like past meshes of classical and rock styles, it may be awkward, but with moments of pure awesomeness. 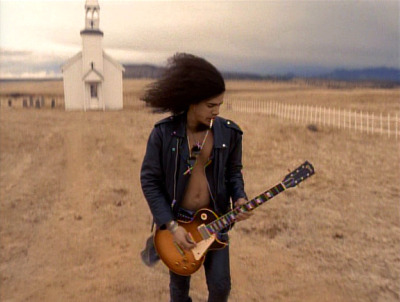 (So where exactly does Slash plug in his axe?)