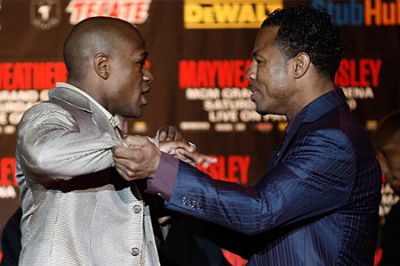 Floyd Mayweather and Shane Mosley hit three cities in three days for the press in advance of their long-awaited May 1 welterweight showdown, filling up news stories with hype and anecdotes that offer opportunities for trite analysis and pop psychology. I’m not about to pass up those opportunities.

Floyd Crosses Into The Stabbing Zone

Verbally, on the second day of the press tour, Mayweather brought up Mosley’s ex-wife and his alimony payments. Mosley shrugged it off. I’m sure he was prepared for the possibility that Mayweather might cross that line, because Andre Berto, before their cancelled January fight, brought up Jin Mosley, too. I’m imagining being Mosley, and having someone bring up my ex-wife or any family member, and thinking I’d get to stabbin’. With knives. In the gut-parts. But he’s Mosley and he’s heard it before. Better man than I. If Floyd can’t get into Mosley’s head with ex-wife remarks, I’m not sure how he can.

But Floyd does think he’s in Shane’s head. He cites Shane’s uncharacteristic confrontational remarks after Mayweather beat Juan Manuel Marquez in September. It was uncharacteristic, he’s right. And Floyd is good at getting into his opponents’ heads. But I don’t think Shane confronting Floyd in September was about Floyd being in his head. I think it was about Shane being desperate for a big fight, and doing whatever he could to get one.

I won’t be completely surprised if Floyd ends up in Shane’s head, by the way, at some point during the fight promotion. He’s good at that. But Shane’s very, very mentally strong, and I think he’s about the least likely person to fall for Floyd’s antics. I think Ricky Hatton and Oscar De La Hoya got thrown off their game some, but I don’t think Marquez did (he was just a small old fat guy) and I don’t think Mosley will. Being in Mosley’s head would help Mayweather, but I don’t think it’s the determinative factor, anyhow.

The Fight Is On May 1. May Is Going To Be May’s First

Thanks for that quote, Shane. It’s moderately clever. (Get it? May = Mayweather, First = first loss?)

Floyd Considers Money A Priority In His Life

Oscar’s Shane’s promoter and business partner. That he would say such a thing is unsurprising. Rarely if ever does any second-hand reporting about sparring mean anything. If people who are allied with a boxer say he’s looking good, well, that’s just expected, innit? If people say he’s not looking good, they’re often people with agendas, or maybe they were there on a day where a boxer was working on something specific and wasn’t trying to win rounds. I’d love it, though, if one day a boxer’s promoter was like, “Yeah, I saw Shane in sparring, and he looked like days-old dog crap.” Also, Oscar says Shane will knock out Floyd because he’s fought both and he knows from experience. Yeah, I’m sure that’s the reason he’s saying that. And if it seems dumb that I would even bring any of this up, it’s because people wrote stories about what Oscar said about this stuff.

This one confuses me. Schaefer, the boss of Oscar’s promotional company, has an excellent track record of predicting fight buy numbers, like when he kept insisting Mayweather-Marquez would do 1 million and no one believed him and he was right. Three million is a fucklot of buys. I think Mayweather-Mosley is a mega-fight, a true major event that offers both quality and star power. But bigger than any fight ever, more even than Mayweather-De La Hoya, which featured De La Hoya, a boxer whose public profile then still seemed considerably higher at that point than either Mayweather or Mosley at this point? It sounds far-fetched, but don’t count out Schaefer on this one. And if it gets that kind of numbers, I can’t say it doesn’t deserve them. Press tour or no, Mayweather-Mosley is a really exciting fight.

Mayweather’s storylines for these shows are played out after having starred in three 24/7s, but we’ve not gotten to know Mosley as intimately as we’ll get to for this documentary series. That should make it worthwhile.

This technically began before the press tour, when Roger and Floyd Sr. did some interviews where they talked again about how Pacquiao is on “A-side meth,” a drug that only they have heard of and, according to them, gives its users the ability to get shot without problems.

Think about that for half a second. That’s really their position. That Pacquiao is immune to gunshots thanks to a magic drug that doesn’t turn up in any Google searches except when quoting the Mayweathers saying that’s the drug Pacquiao is taking.

In most other fields of journalism, if someone says enough crazy things, reporters enjoy quoting them for a while, because crazy things make good stories, but then they confine them to a no-quote jail. They’re shunned, treated like the wingnut loons they deserve to be treated like.

That doesn’t happen in boxing journalism, at least as it pertains to the Mayweathers. They say any damn thing they want and everyone in boxing journalism plays it straight, like it’s newsworthy. It isn’t. It’s crazy people saying their rivals are on drugs that make them bulletproof. It’s time to turn off the tape recorders. (Rafael, to his credit, said he was grateful Roger didn’t get the microphone at the DC news conference.)

Who R U Picking?

That’s how the fight is billed. It may be the dumbest billing of any fight ever. “Who R U Picking?” Smdh.