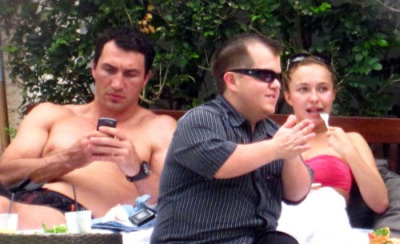 First came the above picture of Wladimir Klitschko, “Heroes” star Hayden Panettiere and a dwarf. Or little person. Or person of short stature. Whatever. And it’s just weird, you have to admit. Like they’re recreating a still life of a banana, an apple and some grapes.

Second came the entertainment news outlets speculating that Klitschko and Panettiere are an item.

My rule of talking about boxers’ personal life is this: It’s none of my business until it affects their performance in the ring, or until it’s funny. It’s kind of funny, imagining the 6’7″ Klitschko… shall we say, “cavorting with?”… a sub-5′ woman. With a dwarf around.

That said, it kind of makes Klitschko more awesome. I dont think Mz. Hayden is as hot as a lot of people do — she’s kind of shaped like a rectangle, although she does have a cute face and if you throw any girl in a cheerleader outfit, she gets 8x hotter — but if there’s something annoying about Klitschko’s reign as heavyweight champion, it’s a lack of glamour. He’s a hell of a charitable guy and a very skilled practitioner, but he’s boring in the ring. Dating Hollywood starlets, or even hanging around them (with or without a dwarf), makes him way cooler.

*That asterisk in the headline is because it’s all just speculation. Nobody knows a damn thing. Although they do look “cozy” in picture #2 below.