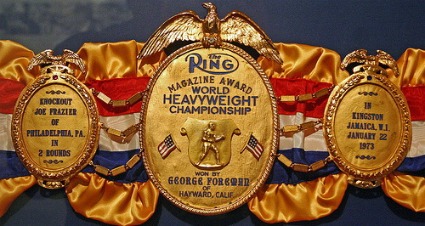 Inspired by Tim’s recent posts regarding the good, bad, and (mostly) ugly of the sanctioning organization titles, I decided to take a closer look at the one generally agreed upon shining beacon in the foul blackness that is the boxing championship scene – the Ring Magazine championship.

In general, the boxing media and hardcore fans who despise the sanctioning bodies recognize and favor the Ring championship policy. Most of the biggest sources of grievance among this trod-upon lot – multiple champions per division, irrational (or worse) rankings, discomforting sanctioning fees, and questionable political motivations, just to name a few – are resolved or at least averted by recognizing the Ring championship as the “true” championship.

Tim’s latest post suggested that his contribution to fighting the despicable sanctioning bodies would be to refuse to acknowledge them; or, in his more fiery words, “I say we ignore the bastards out of existence.” Hear, hear!

However, because I can’t help but be the rock wedged in everyone’s shoe, I believe it would be prudent to examine the one policy that unifies the multifaceted, sometimes curmudgeonly group that stands in staunch opposition to the sanctioning mob. While I ultimately support the Ring championship policy, I do not believe it to be perfect, and I think that with a few realistic tweaks it could be a stronger alternative to the sanctioning body madness.

Before getting into the analysis, here is the Ring championship policy, per the Ring Web site:

RATINGS PANEL / RATINGS GUIDELINES – Fighters recognized as champions by THE RING are rated at the top of their division, with the Top 10 contenders listed below. Championship vacancies can be filled by winning a box-off between THE RING’s Nos. 1 and 2 contenders, or, in certain instances, a box-off between our Nos. 1 and 3 contenders. The only three occasions when a fighter will lose his championship status are when he retires, moves to another weight division or is defeated in a championship bout. THE RING Ratings are compiled by the magazine’s editorial board, with the participation of THE RING Ratings Panel of boxing journalists from around the world. To see the complete list of our panelists, click here.

What The Ring Gets Right

This is refreshingly transparent and highly inclusive – prominent writers and observers from a variety of outlets are included (though the page could use some editing, as Showtime and ringtv.com both appear twice, and, Nick Charles, one of the first names on the page, is unfortunately no longer with us), even though many are employed by direct competitors of the Ring Web site. And while many prominent observers are left off the panel, the biggest of the media outlets are all well-represented.

Compare the Ring list to the list of the ratings board for the most reviled of the sanctioning bodies (at present, at least), the WBC. Perhaps my boxing knowledge is too limited, but I recognize exactly one of those names other than Dictator President Jose Sulaiman, that of referee Daniel Van de Wiele, and I’m not too convinced that a referee that is paid by a sanctioning organization should be deciding who gets to fight for titles in that sanctioning organization. Am I crazy for being ill at ease with this?

Regardless, the Ring is clear up front about who does the rankings and those involved are very well qualified, so the darling of the hardcore fans gets off to a rousing start.

Another thing that the Ring gets right is its simplicity. That’s the whole shebang, that paragraph up there. Basically, four sentences are all that are needed to summarize the Ring ratings policy. Compare that to the WBC ratings rules, which feature seven subsections and such gems as, “Ratings are largely subjective” (the first rule!), and considering “Having had a successful career in Muaythai or similar sports” a qualification for rankings. So simplicity and clarity are clearly on the side of the Ring policy.

Thus, the Ring policy leaves little room for debate, uncertainty or confusion, another feather in its cap.

The final tally on behalf of the Ring goes for this sentence: “The only three occasions when a fighter will lose his championship status are when he retires, moves to another weight division or is defeated in a championship bout.” After the whole Timothy Bradley kerfuffle I don’t feel the need to go into much depth as to why this is an important component of the policy, but it is clearly imperative to the legitimacy of a title that it not be stripped indiscriminately.

What The Ring Could Improve

I rejected entitling this section, “What The Ring Gets Wrong,” because I don’t necessarily feel that what I am going to discuss is “wrong.” I think, however, that the policy could possibly be improved with a substantial, and impactful, modification.

Now, what do this list, Tara Reid’s eyes, and the Sex Pistols have in common?

Of the 17 divisions in which the Ring recognizes a title, only six currently feature a champion. Between featherweight and heavyweight, the divisions most likely to get recognition and airtime from the premium networks in the U.S., there are champions in only four of the 11 divisions.

Those four champions, Wladimir Klitschko, Bernard Hopkins, Sergio Martinez, and Juan Manuel Marquez, are among the biggest stars in the sport. All have been featured prominently in recent years on HBO and/or pay-per-view. All are indisputably the premium fighters in their divisions right now, the ultimate targets for the men trailing them in the division rankings, the pots of gold at the end of the rainbow.

All help emphasize the value of having a legitimate champion atop a division and all command attention every time they step into the ring because of their status.

My point of contention with the Ring policy is this: Wouldn’t it benefit boxing to have that scenario in every division?

While it is crucial for a championship policy to be stringent, to avoid scenarios like the one Tim pointed out of two unranked fighters fighting for a sanctioning belt, I personally believe that the Ring policy is too restrictive when it comes to filling a vacated championship.

Currently, the policy for filling a vacancy is: “Championship vacancies can be filled by winning a box-off between THE RING’s Nos. 1 and 2 contenders, or, in certain instances, a box-off between our Nos. 1 and 3 contenders.” First of all, issues have already arisen over the imprecision of the “in certain instances” language. Wladimir Klitschko claimed the Ring heavyweight championship with his stoppage of third-ranked Ruslan Chagaev in 2009, while top-ranked Timothy Bradley was not rewarded the Ring junior welterweight championship earlier this year when he beat number three, Devon Alexander.

According to Ring editor-in-chief Nigel Collins, when explaining the decision to not award the Bradley-Alexander winner the championship, “Since THE RING launched it new championship policy in 2002, we have generally taken a conservative course when filling vacancies.” One look at the list of champions could tell you that this course is far too conservative, given the lack of vacancies filled.

How often do the playoffs in the major U.S. sports end up with the top two seeds in the championship game? Pretty rarely. Just look at the last year. Super Bowl XLV featured the #2 seeded team from the AFC against the #6 seeded team in the NFC. The Texas Rangers, the fourth-best team in the American League, lost the World Series last year to the San Francisco Giants, who had the second-best record in the National League. The NBA champion Dallas Mavericks had the third-best record in the Western Conference and beat the Miami Heat, who had the second-best record in the Eastern Conference, in the finals.

While these sports all have playoff structures that allow these championships to be crowned naturally, boxing doesn’t have that luxury (while I love the Super Six, attempting to implement a tournament like that to crown every vacant title would be absolutely impossible). And the reality of boxing is that if your policy to crown a champion involves only two specific fighters, who may fight in different parts of the world, who may be represented by rival promoters or have contracts with rival networks, who may have any number of obstacles obstructing them from fighting one another, with no contingency plans for filling a vacancy outside of those two men meeting in the ring, you’re going to be left with a championship policy that simply doesn’t crown enough champions.

The goal of a championship policy should be to determine credible champions, not to make becoming a champion unrealistic.

The solution is simple, though I think it will attract a lot of knee-jerk criticism: Update the policy to allow for more opportunities to fill a vacant championship.

Logically, a fighter ranked number one by a legitimate ranking organization should have already accumulated a good resume of accomplishments to earn his ranking. A win over a top five opponent in that division, in addition to his previous accomplishments, certainly gives him the right to claim that division’s championship. Conversely, a top five fighter who beats the number one in the division has a legitimate claim himself to that division’s championship.

In either case, anybody who feels they were unfairly passed over for the opportunity would be advised to take it up with the new champion in the ring.

Similarly, if the top-ranked contender is unable or unwilling to face an opponent in the top five, the number two and number three in the division should have sufficient resumes that a win by one over the other should legitimately catapult them to the championship. If the number one contender is perturbed by this, again, he could settle the issue in the ring with the new champ.

This adjustment of the policy would not only remove the ambiguous current language, but also fill the numerous vacancies that currently stand as the only stain on the Ring championships.

If the Ring could shed some of their conservative leanings and open the door to crowning a champion in every division, there truly would be no need for the disgruntled among us to pay any heed whatsoever to the sanctioning bodies.