So continues our marathon coverage of one of the biggest fights of 2011, Manny Pacquiao-Shane Mosley on May 7. Previously: the stakes of the bout; a Pacquiao vs. Mosley-themed Open Thread; keys to the fight, part I and II. Next: a TQBR Roundtable. 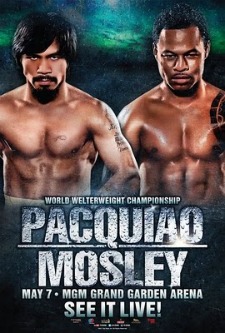 It is not at all implausible that Shane Mosley, as much as an 8 to 1 betting underdog Saturday night, will defeat pound-for-pound king Manny Pacquiao on Showtime pay-per-view. Even at age 39, Mosley has one-punch power that Pacquiao has arguably never encountered in his career. Mosley has speed that exceeds that of arguably anyone Pacquiao has ever faced. Stylistically, Mosley’s blueprint — a big right hand that is poisonous for southpaws like Pacquiao, counterpunching ability to make an aggressive fighter such as Pacquiao pay for his relentlessness — very well could end in victory.

There’s a reason he’s an underdog, though. At age 39, Mosley’s career arc in recent years has been marked by steep drops, followed by notable upward blips, followed once more by steep drops. The current steep drop he’s in is the most dramatic — his stamina seemingly has abandoned him, his reflexes are dulled and a once-great fighter now looks like merely a good one, at best. That Pacquiao promoter Top Rank picked him as Pacquiao’s opponent mere months after company boss Bob Arum said he wasn’t viable for Pacquiao’s next fight because of Mosley’s shoddy performance against Sergio Mora speaks volumes. Mosley is here because he left Top Rank rival Golden Boy Promotions and because he has a modest amount of name value, not because he deserved to be on the competitive merits. And per the Top Rank formula for many of its top fighters, Mosley presents the patina of danger without substantial risk, and will make for an action-packed scrap for just long enough.

This fight is a big event because Pacquiao is in it, among other reasons. But it is not a big fight because of any real, broad-based perception that it will be a competitive one. Mosley has a chance to win. He doesn’t have a probability.

It’s not all Mosley’s fault. Pacquiao is, after all, the best current practicing boxer, and, in my opinion, one of the 20 best who ever lived. He is a dynamo, an unparalleled offensive machine in whom even the untrained eye can detect greatness. Pacquiao’s combination of speed and power, although slightly diminished at welterweight where he has not yet proven as destructive a puncher, is among the tops in the game today. Making matters worse, a style that he has honed since 2008 has thus far proven extremely potent and difficult to prepare for and trump. His oddly-angled, whirlwind, in-and-out attacks from a southpaw stance routinely befuddle his opponents. Physically and stylistically, Mosley presents trouble for Pacquiao. But physically and stylistically, Pacquiao presents trouble for everyone.

Mosley, the CW goes, will be at his most dangerous early. Nobody has ever had Floyd Mayweather in the kind of trouble Mosley had him in last May. And that was against a fighter in Mayweather who thinks defense-first; an offense-first boxer in Pacquiao is going to be even more in harm’s way. If Mosley catches anyone just right, he can do a lot of damage. A lot. Pacquiao trainer Freddie Roach has said he wants Pacquiao to keep the fight at center ring and be respectful of Mosley’s power early. It remains to be seen if Pacquiao is capable of such a thing. He enjoys brawling wildly to boxing intelligently. He certainly did muster the right offense/defense combination against David Diaz, Oscar De La Hoya and Ricky Hatton, but he’d abandoned the whole defense part against Miguel Cotto, Joshua Clottey and his last opponent, Antonio Margarito. Among the opponents for whom abandoning defense would be the least wise among that crew, Mosley is #1.

If Pacquiao can avoid getting knocked out early, the fight should be his. Against Mayweather and Mora, Mosley faded badly down the stretch, carrying none of his power into the later rounds. Perhaps he can defy Father Time once more, but against Pacquiao, it is not likely. Pacquiao wears down most of his opponents around the time Mosley faded against Mayweather and Mora. Mosley’s trainer Naazim Richardson has talked about Mosley picking his spots, but Pacquiao, even a defensively cautious one, isn’t going to let Mosley pick his spots. It is for that reason, I suspect, that Richardson and Mosley have talked about going gangbusters at Pacquiao right away. They know that is his best chance.

Even if Mosley does manage to hurt Pacquiao and go in for the kill, he’s going to have to worry about getting caught back with something big. Mosley has always been sturdy. He has been knocked down, hurt and defeated, but never knocked out. Most worrisome for the veteran, though, is that against Mayweather — after that extraordinary early round surge — Mosley came very close to getting stopped, and probably would have if he hadn’t shied away from contact late in the fight. When it comes to punching power, even at welterweight, Mayweather is no Pacquiao. Pacquiao might not have mega-power at 147. But he has enough to hurt this older version of Mosley, if Mayweather does.

My view of things is that Pacquiao will fight with a passable amount of caution early, maybe even get wobbled for a second, but won’t be in any real harm. And Mosley won’t find the Fountain of Youth, not against someone like Pacquiao, so he can forget about a late knockout. It’s early knockout or bust, and I’m seeing bust. I’m less convinced about how busted up Mosley will get.

Merely decisioning a 39-year-old Mosley who’s 0-1-1 in the last two years does very little for Pacquiao, especially since his rival Mayweather is responsible for the middle “1.” If Pacquiao had delivered that middle “1,” it would be a different story. The Mosley that Mayweather beat was coming off a remarkable win against Antonio Margarito, and he was the consensus #3 man in the sport at the time. Now, you’d be hard-pressed to find anyone who has Mosley in their pound-for-pound top 20. Beating Mosley gives Pacquiao a card to play next time someone says “He never beat an African-American fighter! That style is dangerous to him!” and as idiotic as it is, I guess that’s something — although I’m sure we’ll quickly hear, “He’s never beaten an African-American fighter in his prime! And Mosley’s style isn’t like the ‘typical’ African-American fighter’s!” as if there’s such a thing as a typical African-American fighting style.

To get much of anything out of this, Pacquiao would have to be the first man to stop Mosley — or else Mosley would have to have looked something like his “old self.” I doubt that Pacquiao will flat-out KO Mosley. He very well could force the referee or Mosley’s corner to stop the fight.

But like Cotto and Margarito, I think Mosley has too much pride to allow it, and I think his corner’s not going to be interested in overriding his decision, sadly. It will be left to referee Kenny Bayless, who waited until the 12th round to save Cotto. I suspect it will get that late for Mosley, too. But I think he’ll survive, and Pacquiao will be left with an unoriginal victory against an opponent who wouldn’t have been as worthy as some others. It will still be a big event, though. And Pacquiao will put on his usual pyrotechnic show. We’ll have that, anyway.