Professional wrestling is a soap opera disguised as a sport, as was once pointed out in a slightly too on-the-nose yet nonetheless very funny episode of “South Park.” Like soap operas, professional wrestling shows feature stilted acting, characters whose personalities change wildly at the drop of a hat, nonsensical and melodramatic storylines, abundant cleavage and a reputation for appealing to the lowest common denominator and being dismissed by the refined cultural elite (except Darren Aronofsky).

Like sports, professional wrestling presents athletes “competing” to decide a winner under a set of established rules. The goal of these athletes ostensibly is to attain championship glory in whatever federation they may wrestle.

The difference between pro wrestling and sports, of course, is that the outcomes in pro wrestling are predetermined and the wrestlers are not competing so much as they are performing. This leads to the type of manufactured drama you see on television, in movies, and in books all the time – themes of good versus evil, the downtrodden versus the elite, the establishment versus the unwashed masses. Situations are outlined, allegiances are declared, tensions build and a resolution is reached. It may be a latently homoerotic choreographed dance routine, if you’d prefer to look at it that way, but it also in many respects strictly adheres to the classic rules of drama.

And where is all this rambling about boxing and wrestling going? No, not nowhere — I swear I have a point (some TQBR readers know it can take even longer than this for me to get there, so just hang in). One of the most common criticisms of boxing and one of the reasons cited for its non-mainstream status is that there are too many champions and too many title belts, and that nobody can follow the sport because of this.

I don’t argue with the premise; I agree that there are too many sanctioning bodies and too many titles (I care far less about the number of weight classes than some others, since most of the superfluous ones are in the lowest weight classes, which most mainstream fans don’t even know exist; I doubt merging strawweight with junior flyweight will bring in the masses). I am not convinced of the conclusion, however, that all these titles have any great effect on the popularity of the sport.

The reason for my skepticism? Professional wrestling. See, it’s all coming together!

Currently, the two biggest wrestling promotions in the United States are World Wrestling Entertainment (WWE) and Total Nonstop Action Wrestling (TNA). Even if you hate wrestling, you have likely heard of WWE, where Hulk Hogan, Rowdy Roddy Piper, Stone Cold Steve Austin and the Rock all achieved their fame. Even if you like wrestling, you might not have heard of TNA, but it is where Hulk Hogan currently resides, along with the Nature Boy Ric Flair (WOOO!), Kurt Angle and a few other wrestling stars.

There are currently four different singles titles in the WWE – the WWE Championship, the World Heavyweight Championship, the Intercontinental Championship, and the United States Championship. In addition, they have a tag team championship, and also a women’s division that I’m not going to get into. So at any given time there are six titleholders in the WWE. By my count on WWE.com, there are 57 wrestlers on their roster, including several who are injured and unable to compete. Given that I’m capable of math mistakes and too lazy to count more than once, let’s round it to 60.

Six championships for 60 wrestlers mean that 10% of the roster holds a championship of some form. Take out the inactive wrestlers and that percentage grows.

TNA, meanwhile, has three different singles titles – the TNA World Champion, the Television Champion, and the X Division Champion – in addition to also awarding a Tag Team Championship. So there are five titleholders in TNA. There are roughly 50 wrestlers on the TNA roster, although I watch that crap sometimes and I still don’t recognize at least 10 of them. Still, let’s leave it at 50, which once again means that 10% of the roster currently holds a championship.

Of course, this is not the height of wrestling’s popularity. Most recently, that was the late-90s/early-2000s, when Stone Cold and the Rock briefly made wrestling mainstream. I got sucked in then because I was a camp counselor to a group of 7-year-olds once upon a time (yes, parents, send your children to camp and your child may be in the care of a strange, twisted soul such as myself) and I couldn’t control them until I discovered the Rock. Once I called them jabronies a few times, told them to know their role and shut their mouths (again, parents, be warned) and busted out a few more Rock catchphrases, along with a few Rock Bottoms in the pool, I went from ignored and disrespected to being their favorite counselor. Can you smell what the Rock is cooking? 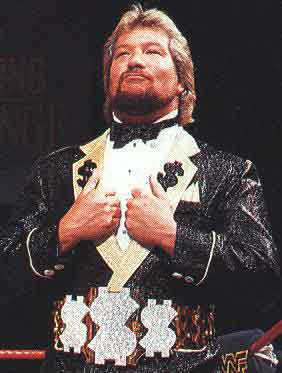 So in a fake sport, in which the writers and bookers have complete control over the action and results, in which having a single champion could most easily be accomplished, title belts abound. And at its most popular, title belts were even more prevalent.

Call me crazy, but that seems to go against the established narrative in boxing.

Meanwhile, boxing boasts four different sanctioning bodies that are considered credible, and they recognize (at least) one champion in each of 17 divisions. Most experts also recognize the Ring champion as the “true” champion of the division, so let’s say that there are five champions in each division (yes, I know all about the interim titles and super titles and silver titles and titles in recess, but don’t you think this mess is wordy enough already?). Because I don’t get paid nearly enough to do that kind of crazy math, let’s stick to the heavyweight division for demonstration.

So in pro wrestling, which is predetermined and each organization can dictate exactly how many champions it wants, roughly 10% of the roster of any given organization will be a champion. In the most glamorous division of the sport of boxing, in which many ardent followers bitterly complain about the lack of a single champion per division, 0.3% of the participants are recognized as champion.

Just to be sure the heavyweights weren’t an anomaly, I tried what I consider the second-most prestigious division historically, the welterweights. Boxrec.com ranks 1400 active welterweights, with four recognized as welterweight champion by the various organizations: Manny Pacquiao (and before Tim Starks or Eric Raskin can say it, yes, I included this division for the PacHits; Google loves names buried 1,200 words into an article), Andre Berto, Jan Zavek, and Vyacheslav Senchenko. Ring magazine does not currently recognize a welterweight champion. And wouldn’t you know it, roughly 0.3% of welterweights are recognized as champions. 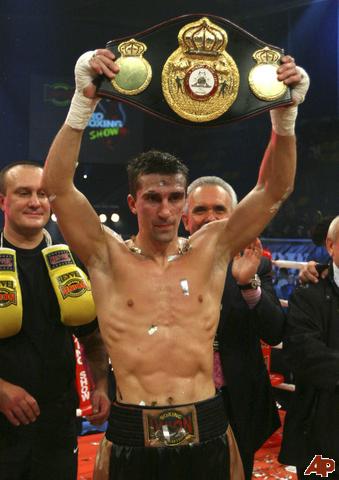 (Everyone knows that Vyacheslav brings in the readers as well as the gold. Don’t let me down, Ukraine!)

Am I saying I want MORE championships in boxing? Absolutely not. Does this prove that there are not too many championships in boxing? No, not at all. After all, I’m comparing apples to, I don’t know, Andy Warhol’s Campbell Soup painting. But I think it puts a rather inflated argument in a different, perhaps enlightening context. And that’s why I’m here, to enlighten you through the power of men in tights pretending to fight.