When I think of baseball great Willie Mays, the indelible image that pops into my mind is the sight of a broken-down Say Hey Kid trudging on 42-year-old legs in his classic orange, blue, and white Mets uniform while batting a meager .211 (.211/.303/.344 for you Bill James stat geeks out there) in his final major league season.

The Polo Grounds? Barely remember he played there. Vic Wertz and The Catch in 1954? You’ll have to refresh my memory.

(If it weren’t for all the tarnish, more people would be familiar with this moment.)

Of course, legends of all stripes are always remembered best for their final public performances, no? Think of Michael Jordan, who is bound to be inducted into the Basketball Hall of Fame as a Washington Wizard. Bryon Russell? Was he famous for a haircut or something? If you’re more of a film buff, maybe we should talk about Orson Welles and his defining role as the planet-eating robot Unicron in “Transformers: The Movie.” No one remembers some slow-moving black-and-white dreck about a sled. And clearly, rock music aficionados tout “A Bigger Bang” as the Rolling Stones’ definitive statement. At least until the geriatric greats churn out their next masterpiece.

While some of us may be baseball fans or film snobs, all of us here share a mutual love of the sport of boxing. And no matter what, all of us should be able to fondly recount the great Sugar Ray Robinson’s defining trilogy with the immortal Harvey McCullough in 1965, the final year of his career. You’re yanking my chain if you ever try to tell me that the great Sugar Ray was a welterweight. Pshaw! And Jake LaMotta, isn’t he a Robert DeNiro character?

With Evander Holyfield adding yet another line to his BoxRec.com page this Saturday, there will likely be the usual roundup of jokes about his age, concerns about his health, and references to his steadfast desire to become heavyweight champion again. My thoughts on those topics, respectively: old people are funny, Sherman Williams isn’t liable to hurt anyone, and Holyfield as heavyweight champion in 2011 or beyond is as likely as my writing the next “Infinite Jest.”

Along with all that, there will be, as there is any time a past-his-prime public figure continues to pursue his muse, a segment of writers, commentators, and fans who will lament the irrevocable damage Evander Holyfield is doing to his legacy by continuing to fight. If you couldn’t tell already, I tend to find these lamentations somewhat vapid.

My simple question, for those who fear the irreversible tarnishing of the legacy of Evander Holyfield: Has any public performer ever damaged their reputation simply by sticking around too long?

It’s an honest question, in that I don’t have a ready-made answer. I can think of countless stars that ruined their reputations through scandal, from Michael Jackson to Mike Tyson to Mark McGwire. And plenty of performers stick to their vocation long after they’ve stopped piling up worthwhile accomplishments. Between 1993-2000, Ken Griffey, Jr. had 40 or more home runs in 7 different seasons, including 5 straight from 1996-2000. In the next ten seasons, until he retired, Griffey hit more than 30 home runs only twice. His legacy was built almost entirely in the 1990s, yet the 10 years he played after will do little to prevent Griffey from being a first ballot Hall of Fame lock when he is eligible.

My guess is that watching a performer who was once great but is no longer capable of greatness stirs sadness in those who lament the tarnished legacy, a sadness they cannot quite grasp, so they resign to blaming it on the performer’s self-defacement. There is without a doubt an acute sadness that accompanies seeing the ghost of greatness, in watching Holyfield slog slowly and painfully through 12 rounds of boxing when we remember the indomitable fighting spirit and irrefutable skill he showed in the past.

No matter what happens in the ring on Saturday night between Holyfield and Williams, Holyfield’s epic war with Dwight Muhammad Qawi in 1986 to win his first cruiserweight title will never be forgotten. His timeless trilogy with Riddick Bowe will forever be integral to modern boxing lore. His unexpected dominance of Tyson in their first fight will be recounted through the ages. 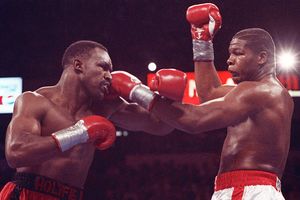 The only thing more difficult than building a great legacy is tearing one down. It will take a lot more than a few long-past-his-prime fights against journeymen to tear down the immense legacy built in the unparalleled 27-year career of Evander Holyfield.