Remorse: This is Gamboa’s first boxing venture since his hotly anticipated showdown against Juan Manuel Lopez was spoiled by Orlando Salido pulling the upset back in April. And Gamboa is a 9-1 betting favorite this weekend. Sad face.

Rejoice: Any night the “Cyclone of Guantanamo” is in the ring is a good night. The Cuban possesses a quality few boxers do, where the best comparisons are to forces of nature and writing his name in all-caps with exclamation points is the proper punctuation. And whatever the odds, Gamboa in against a legitimate opponent, the Ring Magazine-rated #5 featherweight, who possesses his own forceful qualities, the kind that should make for a kill-or-be-killed bargain for both combatants. From a business standpoint, Gamboa-De Leon is a potential harbinger of better days to come: It marks the first time since January of 2009 that top promoters and oft-rivals Top Rank and Golden Boy are working together. Lastly, Gamboa might be left without a superfight now, but Lopez could rehabiliated himself in a rematch with Salido in the coming months, or Nonito Donaire could voyage upward to featherweight, or both. Happy face!

That the undercard features a same-day replay of a rare meaningful bout for one of the Klitschko brothers who rules the heavyweight division — Vitali takes on Tomasz Adamek, ranked #3 by Ring — is bonus. Vitali’s a 7-1 favorite himself; yet like De Leon, Adamek isn’t usually the type to go down without a fight. In the end, with Gamboa and Vitali having claims to spots on the list of the top 10 fighters in the world, regardless of weight class, you can do worse for a televised boxing card than having two of boxing’s ultra-elite in significant, probably fun fights against divisional top-5 opponents.

De Leon is doing well for himself these days, having long since recovered from his shocking 1st round blowout loss to Lopez in 2008. His most recent loss was to Adrien Broner, but since it was at a non-optimal junior lightweight and ended in a close decision that many thought rightfully should have been scored a De Leon victory, it’s as good an “L” as a boxer will get on his record. The resume before and after that Lopez loss is, overall, a good one: He has wins over a list of junior featherweight and featherweight contenders and semi-contenders that includes Antonio Escalante, Cornelius Lock, Rey Bautista, Sod Kokietgym and Gerry Penalosa, even though the Penalosa win was controversial. He lost to Celestino Caballero in 2005, but Caballero was a world-class fighter there for a while. He’s spent long portions of his career among the top men in his division, even if he’s never really had a win over an ultra-elite boxer. Beating Gamboa would give him that caliber of win.

As his career has evolved, so has his technique. Once upon a time, he was all primitive hominid — stumbling around on his feet, recklessly disregarding his own defense, throwing his arms around without any regard for how his hands got to the target, just knowing that if they connected, he’d club his rival down to the ground with his natural power. He hasn’t exactly gone all the way with the obelisk from “2001: A Space Odyssey,” but he’s at least gotten to neanderthal. Now he’s still clumsy, still wings wild shots, still isn’t defensively gifted, but he seems to have a plan to work his way in with one-twos to the head and body, tossing those straight punches in with his old mix and ducking away from harm occasionally. He’s always going to be awkward, especially since he’s a southpaw, and maybe his power has faded a tad at 126 lbs., and he’s always going to try and win with his offensive volume more than with slick counterpunching, but he’s a better fighter now even has he’s held on to enough of his explosiveness to threaten a lights-out moment.

That’s especially the case against Gamboa, whose ass isn’t BFFs with the canvas but is at least a friendly neighbor down the hall to it. He’s been dropped by four opponents, including people who were pretty good like Orlando Salido and others like Adailton De Jesus who made you go, “Huh?” Never has he been badly hurt in any of these trips to the ground; they’ve been flash knockdowns or improper rulings, all. But he’s also not faced anyone with the power of De Leon. In fact, outside of perhaps Salido, whose reputation was burnished foremost after the Gamboa fight when he beat Lopez, you can make the argument that De Leon is the best opponent of Gamboa’s career. It’s hard to remember, given Gamboa’s superb Olympic career, his start against extremely seasoned opponents for a new pro and his 20 fights that Gamboa’s pro career is a very new thing. He began as a pro in 2007, and while De Leon is only two years older at 31, he has been a prizefighter for six more years than Gamboa.

Yet despite the pro experience of De Leon and power incomparable to any Gamboa has yet faced since 2007, Gamboa is so transcendent a talent that the odds are what they are. There are only two active boxers who have similar mixtures of speed and power — Donaire, currently a bantamweight, and middleweight champion Sergio Martinez — and both of them reside in the pound-for-pound top 5, by consensus. That’s the foundation for Gamboa, and it’s a foundation that virtually any other boxer would kill for. For a while, he blew right through everyone with raw talent and aggression, but some of those trips to the mat served as wake-up calls that maybe not every fight must be won by kamikaze. He’s since had his own fleeting encounter with the obelisk, enough to improve his balance, to figure out he has to keep his gloves up more frequently, to attack with precision rather than abandon, to win with slickness when power won’t do. In his last fight, against Jorge Solis, he appeared to put it all together. He walked the perfect balance between fiery offense and cool defense. After the fight was stopped in the 5th round, Solis remarked that Gamboa punched harder than pound-for-pound king Manny Pacquiao.

There is a fighter who beats Gamboa, I’m sure of it. He’s not without vulnerabilities. Maybe it’s a brute like De Leon who pulls the trick, since he has the kind of power that can starch Gamboa if Gamboa has sincere problems taking a punch, rather than sincere problems with his balance. My personal suspicion is that it’s someone who’s faster than De Leon, who’s in the bottom 10th percentile among real contenders across every division. I also suspect it’s someone whose technique allows him to punch between Gamboa’s furious combinations, and that ain’t De Leon. And another suspicion is that it’ll be someone whose physical dimensions aren’t equal to the stocky 5’5″ Gamboa’s, but rather someone taller and longer (although De Leon does have an impressive reach advantage of 5″) who can better handle Gamboa’s quick in-and-out strikes. Lastly, it’ll have to be someone who can contend with unearthly power; I’m not sure De Leon is that person, although his 1st round KO loss to Lopez has been the exception, not the rule.

If Gamboa’s on his game, he should be able to catch De Leon unawares and then keep the pressure on him for a relatively quick — let’s say 3rd round — knockout. If he doesn’t hurt De Leon early, De Leon will be dangerous all fight long, which might lead to a sequence where Gamboa is wobbled or dropped and then decides to win by circling away from his flat-footed opponent and selectively countering. However it comes, Gamboa will almost certainly win. If he doesn’t, it’ll be a depressing year for your TQBR founder; another favorite, Paul Williams, has encountered very dark days of late, and Juan Manuel Marquez is about to get his in a rematch with Pacquiao. If he does win, we can start daydreaming about a revived Gamboa-Lopez clash or Gamboa-Donaire.

There are two deeply opposite views of Vitali’s last fight, a 1st round stoppage of Odlanier Solis. One view is that Solis got creamed and never had a chance. The other view — my view — is that Solis found some things that worked against Vitali, and while the punch that led to the knockdown and resulting knee injury was an authentic discombobulating blow, Solis’ momentary success was a window into a realm of possibility that maybe, just maybe, there was a formula for beating Vitali. 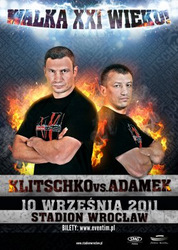 Alas, Adamek has enough Solis-like qualities might be able to stick his head through that window, but it’s just as likely to get ripped off as anyone else’s. For a heavyweight, Adamek — a former cruiserweight champ and light heavyweight contender — is fast. But he’s not as fast as Solis, whose speed was key to catching Vitali. Among current heavyweights not named Klitschko, Adamek has pretty good defensive and counterpunching skills. But his aren’t in the league with Solis’, who was able to block Vitali’s punches in the pocket and fire back quickly, whereas Adamek has to stick and move.

So where does that leave us? It leaves Adamek’s best chance like most everyone else’s, despite his high ranking in the division: that Vitali, who has periodically shown signs of his 40 years wearing down on him, including a long layoff due to injury, ages so badly he drops off a cliff.

Alternately, maybe Adamek invents an as of yet unknown method of beating Vitali. Adamek’s an experienced guy, a decent athlete and a surprisingly clever boxer who’s beaten a lot of different “types” — the quick-fisted Steve Cunningham, the power-punching Chris Arreola, the brawling Paul Briggs. So I suppose it’s possible he’ll figure out a method of beating Vitali that one one else has. But I can’t imagine what that is.

Only Lennox Lewis — and a shoulder injury against Chris Byrd — have beaten Vitali, and Adamek isn’t suddenly going to match the 6’6″ish height of either Vitali or Lewis. Height is an assets against the Klitshckos, given their superb control of distance. And overall, Adamek is a small heavyweight who’s overachieving in the division and had trouble with Michael Grant, similarly proportioned to Vitali but nowhere near as good. Vitali has a similar style to that of his divisional champion brother, Wladimir: the punishing jab, the hard right hand. At least you can hope to knock out Wladimir, who has been KO’d a few times. But Vitali, while not as athletic as Wlad, has shown no sign that he can be hurt, let alone KO’d. No, against Vitali, I think it’s speedy counterpuching, or height, or sudden onset of age/injury, or nothing. Like Wlad, there’s a reason Vitali has had an easy go of it for half a decade-plus, knocking off top-10 heavy after top-10 heavy, from Samuel Peter to Juan Carlos Gomez to Kevin Johnson to Solis.

Although no one has ever questioned the heart of Adamek, fighting a Klitschko has a corrosive effect on the willpower of nearly everyone. I don’t know if Adamek will go down swinging, or try to box his way cautiously to victory and/or not-a-knockout. My sense is that he will end up the fight thoroughly defeated but on his feet, either because Vitali can’t wear him down or Adamek won’t let him. But the outcome will be the same: The extraordinary number of Poles who will be in attendance — 40,000 — will go home with tears streaming down 80,000 cheeks for their national hero Adamek.