In the race for the punchline to the joke about semi-retired heavyweight boxer Nikolai Valuev looking for the Russian yeti in Siberia — “he got there, took out a mirror and job done!” or some variation — I’m in last place. But no one’s taken the visual route.

The yeti, via a Google Images search for “Russian yeti“:

The Russian yeti, going into disguise: 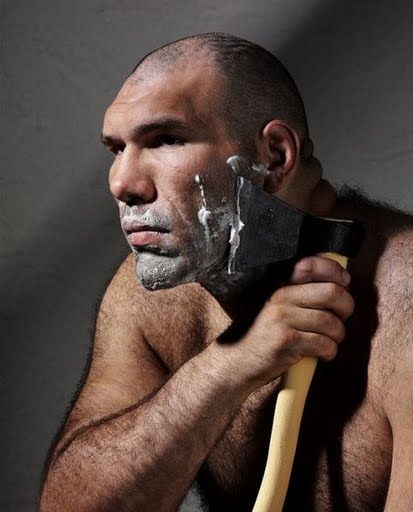 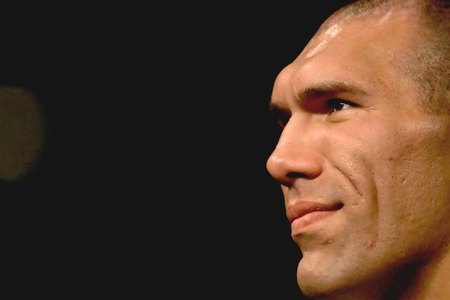 I know I was just pooh-poohing the idea of making fun of Valuev’s freakishness, but dude, you go looking for the Russian yeti, and you’re basically giving us permission. Also, bad news: He didn’t find the yeti. LIKELY STORY, NIKOLAI.

In this while-you-wait edition of Quick Jabs, you get some tidbits left out of the past week’s coverage of Floyd Mayweather vs. Victor Ortiz; an update on the TQBR staff; some news about trainers and promoters and such; and then, we throw in some Round and Round, where we examine fights in the works.

OK, so who’s the fakest in tonight’s Mayweather-Ortiz showdown? Mayweather, or Ortiz? Mayweather, it turns out, reportedly listens to country music and his favorite movie is “The Notebook.” Some gangsta he is! As for Ortiz, there have been two recent interviews with his enemies Brandon Rios and former trainer Robert Garcia about how his whole tragic back story is made up. It’s worth noting that, as of this writing, I have tried and can’t find any inconsistencies in the stories Ortiz has told about his early life, in interviews from 2007 to 2008 to 2011, including when Ortiz was with Garcia and appeared to corroborate his tale. On one side, you have Ortiz, past-Robert Garcia, brother Temo and sister Carmen, plus a childhood friend; on the other you have people who don’t like Ortiz or are affiliated with people who don’t like him. Ortiz’ team has a lot of message discipline, if they’re lying; the other side has animosity going for it, so you have to keep in mind they have a motive to make Ortiz look bad, especially doing interviews the day before the fight. I also recall an HBO interview a while back with Ortiz’ father and other people from his community, but haven’t been able to track it down. Feel free to doubt Ortiz, who does have a knack for saying bizarrely untrue things. But until I see something conclusive, I have no reason to disbelieve him…

The other element of the interview with Brandon Rios that was eyebrow-raising: that Ortiz had hired a hit man (!) to do him in. Again, take it all with a grain of salt, but it sure is an interesting thing to say out loud. Also, the Rios story was written by Corey Erdman. You might have noticed Corey hasn’t been around these parts lately and sadly he’s been preoccupied elsewhere — including with a new job — and won’t be able to continue as a staff writer. It was nice having him, though, and he’s worth keeping up with on Twitter and at The Score…

Just $2 million to fight Mayweather? Ortiz got jobbed, even if he’s very confident of a victory…

Are you a top-10 caliber junior welterweight? If so, there’s a 25-30 percent chance you have a new promoter or are about to. First up, Devon Alexander (who’s actually moving up to welter) and Humberto Soto (who’s just departed for 140) are signed with Golden Boy Promotions. Second up, Timothy Bradley is all but certain to sign with Top Rank and could appear on the Manny Pacquiao-Juan Manuel Marquez III undercard, with the idea of setting up Bradley as a future Pacquiao opponent, obviously. Bad thinking, though, Timothy, if Erik Morales is who you want next — you know he’s been working with Golden Boy, right? It’s not a permanent deal between Morales and GBP, but it does seem like targeting someone at Top Rank would be a wiser strategy…

Are you, or have you ever been, one of the quickest and most talented fighters in the game who nonetheless has enormous mental issues? If so, there’s a 25-30 percent chance your ex-trainer thinks you’ve made a horrible decision about your current trainer. Light heavyweight Chad Dawson has indeed enlisted “Iceman” John Scully as his trainer, abandoning Emanuel Steward to Steward’s dismay about what that means for his chances of beating Bernard Hopkins next month. And Scully is a good trainer, but switching things up this far out, and training close to home, are both bad ideas. Also, it’s a permanent deal, or as permanent as any Dawson training situation can be. That’s all per a news release from Gary Shaw. The other person in this situation is Zab Judah, whose dad and former trainer Yoel thinks Zab needs to get rid of that “dumb” Pernell Whitaker, a funny thing for anyone to call Whitaker. I’m against Yoel on this one. Zab didn’t listen to his dad and seemed undermotivated when they were together. Maybe Whitaker hasn’t helped THAT much, but he’s an upgrade…

More Arturo Gatti fallout, according to recent court testimony: He ripped up his prenuptual agreement with Amanda Rodrigues right in front of her as a show of how much he loved her, then promptly sought to make sure through other outlets that the agreement was still valid; and shortly before his death, he looked into getting a divorce. Ugly forever, apparently…

Per a news release, Showtime is broadcasting Mikkel Kessler-Robert Stieglitz on Nov. 5 on the undercard of Lucian Bute-Glen Johnson, but honestly, unless Kessler’s going to be battling a top super middleweight soon — like, for instance, Bute — I don’t know why that fight’s being aired. Since Bute and Kessler have already had negotiations fall apart, I simply don’t get it…

I keep ignoring the fact that Montie Barrett is trying to join the WWE because A. I don’t think, at his age, he can master it and B. I don’t see how the WWE can make a star out of a boxer who was never that good and never really wowed anyone with his personality. But he’s in camp, so he’s giving it a try, and I can’t knock the effort. Good luck, Monte. May you master the ring ropes in pro wrestling better than your most noteworthy encounter with the ring ropes in boxing.

It looks like Lamont Peterson will indeed by the opponent for top junior welterweight Amir Khan in December. And, if all goes according to plan, it might end up in Washington, D.C. Oh please oh please oh please. A big fight on my home soil!

On the undercard of Antonio Margarito vs. Miguel Cotto II that same month will be a showdown between very talented but very inconsistently entertaining junior featherweights Rico Ramos and Guillermo Rigondeaux. From a talent standpoint, I’m quite interested in it. But I hope they don’t have a pose-fest all night long.

Adrien Broner and Ricky Burns will indeed go different ways in November. Broner will still fight for a junior lightweight belt but possibly against Eloy Perez, who’s making demands about money that confuse me given that he’s a total non-factor in the sport at the moment. Burns, meanwhile, is targeting Michael Katsidis in a move up to lightweight. That one would be a very nice rumble.

So featherweight Daniel Ponce De Leon says he has a rematch clause with YURIORKIS GAMBOA! Raise your hand if you want him to exercise it. I’m sorry, you’re going to have to raise it louder. I can’t see or hear you. I’m going to have to guess that no one out there is doing it, or else you’re not doing it hard enough.

Did anyone check out Jhonny Gonzalez’ destructive performance against Rogers Mtagwa Thursday? If not, ESPN3 has it available on replay. The featherweight said he wants Jorge Arce next, who has called out Gonzalez, and that figures to be a good scrap if Arce’s body can absorbe a few extra pounds. Gonzalez also stole Arce’s lollipop gag in his walk out to the ring.

Couple cruiserweight fights in the works for November: 1. Danny Green will face Krzysztof Wlodarczyk. Green says Wlodarczyk’s overdose on sleeping pills wasn’t a suicide attempt, but that wasn’t the reaction of people around Wlodarczyk. I’m going to be nervous about him being in the ring at all for an indefinite period of time, so this isn’t the Green redemption fight it could be. 2. James Toney and Denis Lebedev really could happen. Toney has looked very slim in recent photos, so it becomes more realistic due to that.

The aforementioned Rios keeps saying he has no interest in a lightweight clash with John Molina in December, as Molina doesn’t do anything for him, although Rios has just enough machismo that Molina making noise about Rios avoiding him could taunt Rios into signing a contract. And Molina is a top-10 lightweight. Not saying it’s my first choice, but it’s not a bad one, either.

Ivan Calderon isn’t messing around in a move back down to strawweight next month, taking on Raul Garcia, ranked #4 in the division.

Coming off his win over Breidis Prescott, junior welterweight Paul McCloskey is going after Marcos Maidana. I guess if McCloskey can’t get an Amir Khan rematch in the near future, he’s going to fight everyone Khan has ever fought.

Felix Sturm recently called fellow German middleweight Sebastian Zbik a “coward” for turning down a fight with him. Whatever the circumstances, Sturm doesn’t have much of a right to call anyone that name.

(Round and Round sources: BoxingScene; ESPN; Leave It In The Ring; RingTV; various reporters on Twitter; news releases)