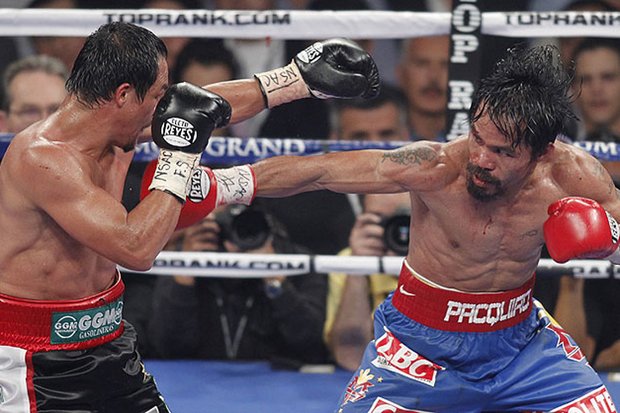 Saturday night was, in many ways, a good night for the sport of boxing. On the undercard of Manny Pacquiao vs. Juan Manuel Marquez III, junior lightweight Juan Carlos Burgos upset Luis Cruz in a nice little scrap. Junior welterweight Mike Alvarado snatched a stirring come-from-behind knockout of Breidis Prescott in the final round of an even better fight. And in the main event, Pacquiao and Marquez did their rivalry right in a bout that far exceeded some of the very low expectations out there — including mine — to produce a fitting rubber match in one of the great trilogies of the past decade.

In other ways, Saturday wasn’t a good night for the sport of boxing. Junior welterweight Timothy Bradley beat up old Joel Casamayor in a bout that did little to generate the intended interest in Bradley fighting Pacquiao, or even seeing Bradley fight anyone. In the main event, the consensus among fans was that Marquez deserved a win he didn’t get, or at least a draw. Pacquiao, who’s delivered so many wonderful moments over his career, showed yet more signs of slowing down. And because of his struggles, Saturday might have been the night that a Pacquiao mega-fight with Floyd Mayweather, Jr. died.

From the standpoint of the match-up, why Pacquiao-Marquez III played out how it did is by now obvious: These two are made for one another, and apparently nothing — Pacquiao’s continual evolution as a boxer over the course of three fights, Marquez’ ever-advancing age, the span of four weight classes — can change that.

There were two other constants on display. For as great and multi-dimensional a boxer as Pacquiao has become, there are still things he simply cannot do. And for as great a boxer as Marquez is, his career is one of “almosts.”

But what we learned about Pacquiao in 2004 courtesy then-featherweight rival Marquez is that he had trouble with people who don’t walk right up to him and engage. And that hasn’t changed at all.

As much genius as trainer Freddie Roach has exhibited turning Pacquiao into the fighter he is today, as much as Pacquiao has absorbed all the lessons, this is one thing that apparently cannot be fixed about Pacquiao. As quick as he is and as good as his footwork is, you would think that Pacquiao would be able to cut off the ring and dodge counters. As gifted as he is offensively, you would think he wouldn’t have so much trouble figuring out how to find openings against opponents who react defensively.

Most every boxer, no matter how excellent, struggles with opponents who play keep-away. But this isn’t about that anymore. Pacquiao has been, for several years, the best fighter in the world. His nearest rival for the title, Floyd Mayweather, had no issues with Marquez’ style. It is possible to overcome this phenomenon with aplomb. Pacquiao has more often than not overcome it — he has defeated everyone on the list I just mentioned — but not without laboring.

This wasn’t Pacquiao’s only problem Saturday. He complained of leg cramps for the second consecutive fight, something that he said had happened even before the Mosley bout. He overthought things, trying to box Marquez technically even after it became clear that an all-out attack — while risky — was his best path to victory. He said Marquez hurt him numerous times, which suggests that this time at 144 pounds compared to the first time Marquez fought at the weight, the 135-pound champion did add strength in addition to bulk.

Our Andrew Harrison asked whether this would be Mayweather’s Marvin Hagler-John Mugabi moment, referencing the fight where Sugar Ray Leonard saw a path to victory over a declining Hagler and finally agreed to the fight he had thus far refused. If it isn’t, it should be. Mayweather is an insecure man, but watching how much difficulty Pacquiao had with Marquez should inspire Mayweather — who’s kind of like Marquez-plus — to want this fight more than ever.

The question is whether Pacquiao should anymore.

Even though I’ve blamed the Mayweather side more than the Pacquiao side for failing to sign a deal, it’s not as if I have thought that Pacquiao’s side was especially eager for the bout. They seemed reluctant, especially promoter Bob Arum, if willing. Of everyone, Roach has sounded most enthused and confident about facing Mayweather. But he didn’t sound so confident after the third Marquez fight.

“[Marquez] understands how to fight Manny,” he said. “He’s strictly a counterpuncher, but he’s very good at it. And that’s what Mayweather does, of course. That is something we need to work on.”

Can it even be worked on? Pacquiao is 32. This is a seven-year-old struggle. How’s he suddenly going to learn to deal with counterpunchers or people who can fight going backward or people who don’t stroll directly into Pacquiao’s line of fire? And how’s he going to get better at this when some of his physical assets are beginning to abandon him?

I always thought, as did any reasonable person, that Mayweather’s style would pose grave difficulties for Pacquiao. But if Pacquiao’s on the decline physically, and if he’s less willing to launch the kind of super-attacks on which his career has been built, then this counterpunching dilemma wouldn’t just be a threat to his chances of beating Mayweather — it would be fatal.

Mayweather-Pacquiao has been losing my interest for a while now. It lost some more Saturday night.

This time, if any time of the three, Marquez should have come away with the “W” on his record. I thought Pacquiao deserved the win in the first fight and Marquez in the second, and while the third was a close fight where I can’t much dispute a Pacquiao victory on the scorecards, this was the one where he finally seemed to get the win. Instead, it was another “almost” in a long line of them. He is something of a tragic figure.

Only once in his life, against Mayweather, has Marquez been soundly beaten. Every other loss was at least arguably unjust, beginning with a disqualification in his first fight, continuing on to Freddie Norwood, Chris John and twice to Pacquiao — and his draw with Pacquiao was debatable, too.

The reasons for those non-wins vary. The DQ against Javier Duran was a strange ruling because it came after an unintentional head butt, a blip in the rules down in Mexico. Most everyone thinks he deserved the win over Norwood, the fight out of this group that, while not one-sided, most resembles a full-on robbery. It was close against John, too, and since they fought in John’s Indonesia, John got the benefit of the doubt. You can’t criticize anything about what Marquez did in the first Pacquiao fight; he just wasn’t able to recover from those early knockdowns, even though he adjusted and controlled the rest of the fight.

It is sometimes the fate of the counterpuncher that he loses close decisions. Judges see one man moving forward, one man being aggressive, and are inclined to favor that man over the one who’s backing up and reacting.

There came a point after the John fight where Marquez realized he couldn’t trust the judges to side with him. He got more aggressive and began taking more chances. That is arguably the reason he lost the second Pacquiao fight — going after Pacquiao as hard as he did left him open to the knockdown that was the margin of victory on the decisive scorecard for Manny. It was an ironic way for Marquez to lose a fight, to say the least.

Saturday, as heroic as Marquez’ performance was — too old and too small, he nearly pulled off the upset against as much as a 10-1 betting favorite — you can still find room for criticism. When Marquez coasted a bit in the final two rounds, he was only listening to his trainer Nacho Beristain, who assured him that he was winning the fight. But it was the wrong tact. Had he been more aggressive in those final two rounds, he might have won the fight outright.

He might get yet another chance. Arum has talked about a fourth installment of Pacquiao-Marquez. But Marquez was clearly exasperated after this loss and said he would contemplate retirement. On one level, it’s hard to blame him. In every single close fight he’s had, he’s never had things break his direction. You would’ve thought at least once, it would.

If Marquez does retire, he’ll be remembered as one of the best fighters of his generation and one of the 10 best Mexican fighters ever. Whatever his disputed wins, he has big and undisputed wins over Marco Antonio Barrera, Derrick Gainer, Joel Casamayor and nice victories over a whole list of contenders at lightweight, junior lightweight and featherweight.

But he’ll mostly be remembered as the man who almost beat Pacquiao three times. It’s been a career of almosts. But his career is also littered with could have beens and should have beens.