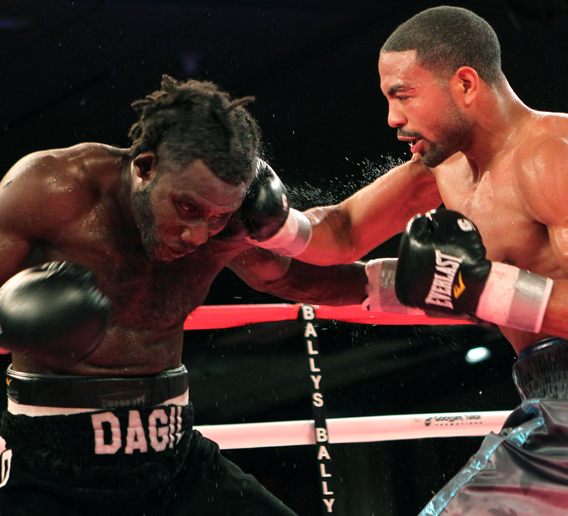 Middleweight prospect Brandon Gonzales’ year is not going to begin the way he would have liked it to.

Gonzales (15-0, 10 KOs), of Sacramento, Calif., was set to appear on Jan. 20th’s edition of ShoBox: The New Generation against fellow unbeaten Caleb Truax (18-0-1, 10 KOs) of Osseo, Minn. at the Palms Casino Resort in Las Vegas. According to Gonzales trainer Virgil Hunter, that fight is now off as the Northern California based middleweight suffered a torn hamstring a few days ago, causing the fight to be called off.

“The fight is off, he tore his hamstring a few days ago,” Hunter said in a phone conversation earlier Monday.

The bout was slated to be the co-featured bout underneath the 122-pound WBA title bout between Rico Ramos and Guillermo Rigondeaux as part of a tripleheader that also features Matthew Villanueva against Mike Ruiz Jr. in an eight-round junior bantamweight bout.

Gonzales was coming off of a narrow eight-round split decision victory over tough gatekeeper Ossie Duran in his ShoBox debut on October 28th, which also served as his first bout under the Goossen-Tutor Promotions banner.

Hunter expects Gonzales to return to the gym in about thirty days. According to Goossen-Tutor matchmaker Tom Brown, they are looking for Gonzales to return by March or April, and they would love to explore this fight with Truax at that time.

Truax will likely fall off the card completely, and their bout will be replaced on television by an intriguing eight-round junior lightweight bout between unbeaten California prospects Guy Robb (7-0, 3 KOs) of Sacramento and Joel Diaz Jr. (6-0, 5 KOs) of Palmdale.

Mark Ortega can be reached via e-mail at ortegaliitr@gmail.com and followed via Twitter at @MarkEOrtega. His first contribution to esteemed British boxing publication Boxing Monthly will appear in their February 2012 edition.