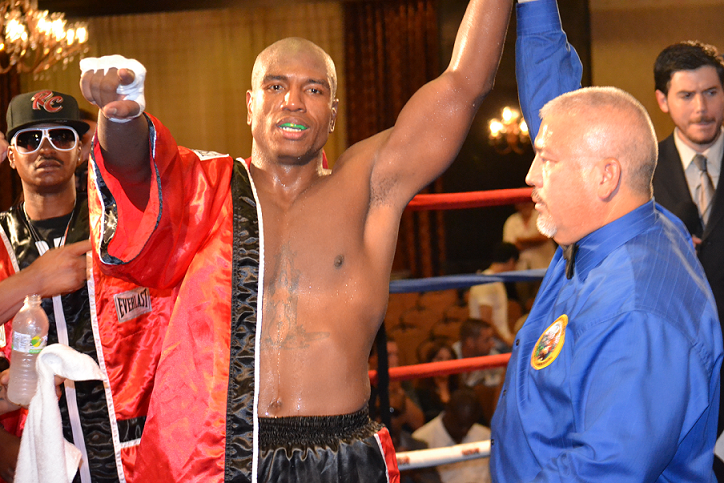 SACRAMENTO — Friday night in Sacramento at the DoubleTree by Hilton, Sacramento favorite and former winner of the boxing reality show “The Next Great Champ” Otis Griffin (24-10-2, 10 KOs) found the win column again as he stopped the tough but inexperienced Adam Collins (11-8, 8 KOs) of Ironton, Ohio. The end came in the 2nd round of their scheduled 10 round over the limit light heavyweight bout and it was Griffin’s first fight in Sacramento in nearly three years.

The fight was closely contested in the opening round until a shot near the top of Collins’ head put him down in the final seconds of the opening round. Collins was not recovered from that blow as he kept pointing to the back of his head before getting dropped again early in the 2nd. Collins looked as though he rebounded well from the knockdown but Griffin finished him later in the round with a left hook, as referee Dan Stell called the fight. Official time of the stoppage was 1:22 of round 2.

In the middleweight co-feature, Sacramento’s Mike Ortega (2-0-1, KO) fought late substitute Cleven Ishe (3-8-1) of Watts, Calif. to a split draw. Ortega overcame a 1st round knockdown to even things up as Ishe seemingly shot his wad early in the fight. A knockdown was not all Ortega had to get by as he was cut on the right eye in the 2nd round but rallied late to keep his “0”. Scores were 38-37 both ways and 38-38.

Gilroy, Calif. welterweight Alonso Loeza (2-6-1, 2 KOs) stopped Sacramento’s Juan Martinez (0-1) in the third round of a scheduled four round contest. The bout was contested at a torrid pace as both guys exchanged wildly throughout. Loeza’s body attack wore down Martinez and he got beat up in the 3rd at 1:40 of the round.

In a four round featherweight bout, local favorite John Abella (2-0, KO) of Sacramento notched an impressive win over the game but Misael Martinez (0-6) of Los Angeles. Abella came out of the gates quickly, picking his spots well before hurting Martinez in the 1st with a booming shot to the body. Abella got a little overanxious as he went for the early finish and missed a number of shots.

In the 2nd, Abella worked a little more intelligently as he staggered Martinez midway through before following up with more concisely picked power shots. Abella staggered Martinez against the ropes and teed off before referee Dan Stell stopped the bout at 2:00 of the second.

In a fun super middleweight fight, Jose Alvarez (3-1) of Sanger, Calif. earned a four round split decision over Gregorio Viramontes (0-3-1) of Woodbridge, Calif. It was a slugfest devoid of real technical skill as both guys winged power shots and left their jabs at home. Alvarez proved to be the more accurate of the two as he pasted Viramontes a seemingly endless amount of times with lead right hands.

At the end of the 1st round, Alvarez landed a couple of right hands that wobbled Viramontes, and followed up with a few shots after the bell had sounded that buckled him as well. In the 2nd, Alvarez mauled his opponent in a more spirited round. The 3rd round saw the action tighten up a bit, and in the 4th the two closed the show in the final ten seconds by throwing Hail Mary shots. The scores read in favor of Alvarez by counts of 39-37 for Viramontes, which was overruled by 40-36 and 39-37 scores in favor of Alvarez.

In attendance were a number of former titlists. Former two divisional beltholder Tony Lopez, the last real ticket seller to come from Sacramento; former junior welterweight titleholder Loreto Garza from Woodland; and comebacking former WBA welterweight titleholder James Page, who is looking to return to the ring after a more than decade long layoff from the ring.

New promoter to the Sacramento area OPP Presents put together a crowd-pleasing card that featured a number of local fighters who may not reach the heights of the sport but drew a raucous crowd. They hope to return to Sacramento with Griffin again in the main event in October.

Mark Ortega can be reached via e-mail and followed via Twitter. Mark also contributes to renowned boxing publications RING Magazine and Boxing Monthly, and is a member of the Boxing Writer’s Association of America and RING Ratings Advisory Panel.