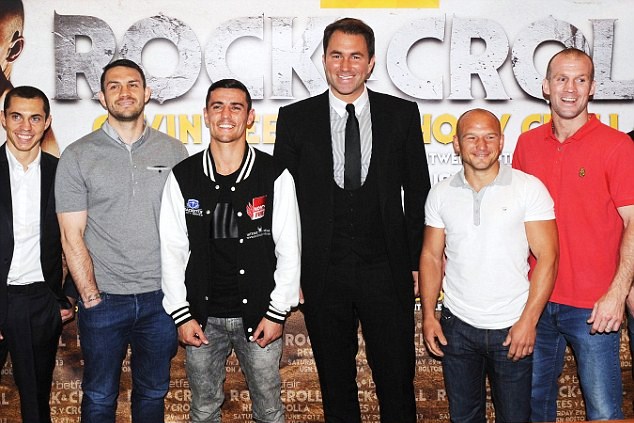 Lightweight has proven a tough beat on the home front over recent years. Men such as Ricky Burns, Kevin Mitchell, John Murray, Derry Mathews, Anthony Crolla and Gavin Rees — a melange of stylists and thorny operators — have all walked it. On Saturday at the Bolton Arena the latter duo from that crop — Crolla and Rees — will combine for the latest episode in a blood-splattered canon.

A boxing stronghold of speed and finesse, lightweight has provided back-to-back domestic Fights of the Year. In 2011, erratic Londoner Mitchell outlasted Levenshulme rival Murray throughout eight rounds of unremitting violence. Murray’s former gym-mate Crolla was involved in a brace of small hall classics last year that were hard to split — going down in flames to a resurgent Mathews in Liverpool initially before rebounding admirably to win a 10-round decision over the ill-fated Kieran Farrell in Manchester. They have all rounded on one another; Rees has out-toughed Mathews (the pair had previously drawn after a clash of heads shattered Mathews’ nose), Rees and Murray had agreed to face off (only for the latter to fail a brain scan), Crolla and Mathews fought to a stalemate in March while Burns obliterated Mitchell. It has been an uncompromising period.

Trained by Joe Gallagher at the Gloves Community Centre, an investment project financed by local hero Amir Khan in the impoverished Halliwell area of Bolton, English champion Crolla makes his first start since the Mathews fight. The 26-year-old from New Moston has a Colgate smile and sunny disposition – attributes that have afforded him a sideline in punditry for subscription network BoxNation.

Rees, a former world titlist at junior welterweight, suffered a demoralising beat down at the hands of Ohio firebrand Adrien Broner in his last outing. Physically outgunned — hopelessly so in fact — Rees, 37-2-1 (18), gave an honest account of himself in the early going before Broner hammered home his myriad advantages to ensure a 5th round surrender.

Crolla, 25-4-1 (9), can box beautifully on the back foot. He works to a rhythm, popping neat jabs mixed with lead screw shots and well-aimed left hooks underneath. His power and head movement could be improved and he has to be reined in from committing professional seppuku by scrapping with those more powerful than he. Other detrimental tics include an inclination to clam up when under fire while leaving his head stock still behind a high guard that he cups to his face.

Rees is nippier and more rugged. The Newbridge fireplug, who has held British and European titles at lightweight, commits to sparky little bursts and maximises his diminutive stature by burrowing under punches in order to hit his mark. Crolla’s aim will be to make the little Welshman overreach by back pedalling when he leads before checking him with sharp counters. It is a tactic Mathews trialled for him against Rees in the opening stages of their rematch.

Crolla tends to struggle when an opponent ruffles his feathers. English junior lightweight champion Gary Sykes has twice gotten the better of him. In an autumn Prizefighter tournament, the Dewsbury Duracell messed Crolla about by employing waves of scruffy attacks that left the Mancunian cut, bloodied and on an early bus home. Mathews appeared the stronger man in each of their contests, and had the jump on Crolla whenever things got a bit hairy.

Under trainer Gary Lockett, Rees appears to have righted the stamina woes that almost did for him against John Watson and Andy Murray either side of Christmas 2010. That will prove crucial as he looks to surpass Crolla, a strong finisher himself, down the home straight.

In a contest that is likely to be far closer than the 3-to-1 odds against Crolla would suggest, Rees should have enough pep remaining to edge a decision win. Crolla, though, will win his fair share of rounds and is more than worth a flutter.

Bury’s junior featherweight contender Scott Quigg, 25-0-1 (18), resumes his career on the undercard against little known Brazilian William Prado, 21-3-1 (14). Quigg found himself in quicksand under promoter Ricky Hatton but is back in commission after linking up with Matchroom Sport (and Sky Sports by proxy).

Paul Smith and Tony Dodson reconvene to contest the British super middleweight title that Scotsman Kenny Anderson relinquished back in December. The Merseyside rivals fought over this very belt (then held by Smith) back in 2010 in a blood-soaked encounter that Smith pulled out of the fire to win over the distance. Smith, 32-3 (18), has since received royal hidings from contenders James DeGale and George Groves. Garston’s Dodson, meanwhile, looked a spent force in defeat to Ovill McKenzie in 2012 (after which he failed a drug test that earned him a four month ban). With only a six round walkover to his credit since, this looks a tall order for 32-year-old Dodson, 29-7-1 (14). Both men, though, bleed like sieves; it may be a case of who tears last.

Two of the U.K.’s top welterweights meet a day earlier at the Olympia in Liverpool. It is an ideal match-up between boxer and puncher as Birmingham’s Frankie Gavin attempts to outfox his menacing Commonwealth counterpart Denton Vassell.

Ancoats powerhouse Vassell, 20-0 (10), presents Gavin, 15-0 (11), with his riskiest venture to date. After making a seamless return from a year-long hiatus in November when he derailed the well-regarded Oldham prospect Ronnie Heffron in a half-dozen rounds, Vassell has ambitions that extend far beyond domestic level.

Gavin, too, is ready to kick on. A crafty southpaw with a natural aptitude for the sport, he has tallied four wins under Hall Green coach Tom Chaney and made steady strides in each of them. His in-built radar and canny foot placement torments and frustrates – an artful dodger who picks punches rather than pockets.

Vassell holds a 12-round decision over Colchester’s Lee Purdy from 2010 – perhaps the pick of his wins to date. Bull-like and superbly conditioned, he rumbles and rolls his way close before springing upwards with punishing hooks and uppercuts. It is an exciting style that, alas, has a downside: He can be flat-footed and easy to hit. He also frequently squares up and in dipping to punch he can be read by the literate.

Gavin, one year the younger man at 27, is the hot tip here (he can be found in the region of 1-to-2, with Vassell showing as a 2-to-1 outsider). His use of angles, feints and pivots should allow him to stay one step ahead of an intense and physically imposing foe to register a solid victory on the cards. Vassell, though, will never stop coming.