HBO’s new mini-documentary focusing on boxing’s out of the ring personalities, “Cornered,” debuted earlier in the week. The first instalment focused on Mr “let’s get ready to rumble” himself, ring announcer Michael Buffer. The Buff (as I will now call him) seems like an interesting guy. His chiselled jawline and John Boehneresque complexion certainly belie the amount of time he’s been involved in the fight game.

But it got TQBR to thinking about boxing’s other, equally colourful personalities. Specifically, the ones we want to see HBO give the high-def, slightly shaky, mini doco treatment:

I’m not even sure if brother Naazim counts as an out of the ring personality given the amount of time he spends between the ropes training and advising fighters — I just want to see him talk for 10 minutes. Richardson might not be the wisest man in boxing, but he’s the smoothest talking. The man who has given us gems like “Knock the grease off this dude then swim without getting wet,” simply needs more air time. 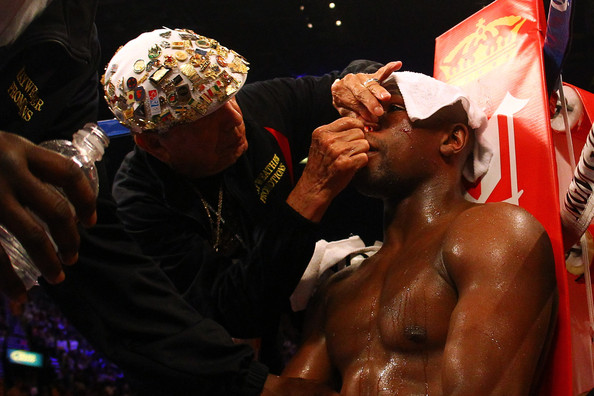 Floyd Mayweather’s 83-year-old cutman is an interesting dude. Don’t you want to know why he has all those pins on his cabby hat? I do. Also love the fact that he’s worked for Floyd for more than 10 years and still calls him “Floy Maguaider.”

You can’t question the heart of British promoter Maloney, who has twice fainted and once had a heart attack after seeing his boxers in strife. Can you imagine Oscar De La Hoya or Bob Arum having a heart attack after seeing one of their boxers get knocked out? I’m not even sure they have hearts. Despite being a fairly hardcore anti-immigration, anti-EU politician, Maloney mainly lives for his dogs (at least judging by his Twitter feed).

How many 73-year-olds can pull off that look? Nacho is the man. Not only has he trained a who’s who of Mexican badassery, he’s a badass in his own right. He drives a Shelby Mustang, smokes Cuban cigars and has an old school Mexican ‘stache. Who has been the highlight of every single 24/7 series featuring Nacho? Nacho! When Freddie Roach wanted a picture with him after Manny Pacquiao/Juan Manuel Marquez II, Beristain is reported to have walked away before dismissing Roach in Spanish, saying: “What do you want to do, blow me?” Also says “Floy Maguaider.”

As close as boxing comes to a Kennedy, Nicole Duva seems pretty fascinating. A scion of the Duva family who run Main Events, her life is pretty awesome. Based on nothing but social media, she goes to lots of fights, sasses people and gets boozy. What’s not to like? She’s pretty hot too, at least judging by her dingus on Twitter (dingus is Aussie for headshot – I’m hoping it’s going to become a “thing”).