So continues our marathon coverage of one of the biggest fights of 2013, Floyd Mayweather vs. Canelo Alvarez on Showtime pay-per-view on Sept. 14. Previously: the meaning of Mayweather-Alvarez; a special edition of TQBR Radio; the undercard and week's schedule, previewed; keys to the fight parts I and II; how good Mayweather-Alvarez could be; a preview and prediction for Lucas Matthysse-Danny Garcia, as well as the story of the fight; a staff roundtable; Alvarez tries to win one for redheads. Next: the ultimate guide. 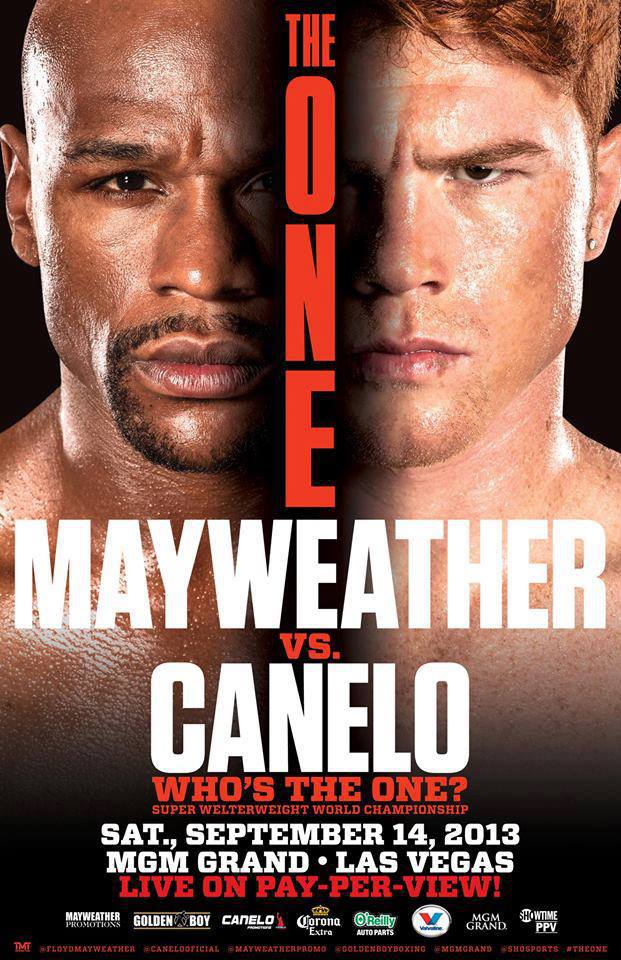 There is enough distance in reality, but not in perception, between "Canelo Alvarez is the most threatening opponent for Floyd Mayweather, and his most threatening in many years" and "Canelo Alvarez is not likely to beat Floyd Mayweather" that the coverage and promotion of Mayweather-Canelo has suffered from schizophrenia, with some vociferously denying the former by asserting the latter, when in fact both are true. The first quote makes the fight worth watching, and makes it the most desirable fight in the whole sport (and possibly the richest in raw dollar terms). But the second part is is the case no matter whose name you put in for anyone anywhere from 140 to 154 pounds. No one is likely to beat Floyd Mayweather. Alvarez is merely, right now, the most likely of a cast of longshots, and a longshot whose popularity with Mexican fans makes him a marketable opponent in other ways.

When a fighter is as unbeatable as Mayweather appears among fighters of his size, you can find all of his bouts inherently boring; you can appreciate his artistry; you can shout for him to move up in weight; you can pray for his brilliance to evaporate such that he becomes vulnerable; or you can just hope he faces the most challenging opponent he can and that this opponent presents enough of a challenge to create drama and fight well enough to maybe win.

Mayweather-Alvarez presents the possibiliy of all of those things. It could be a boring and one-sided fight, with Mayweather's hit-and-not-get-hit mastery too much for the green 23-year-old redhead. If you can appreciate such artistry, then Mayweather is a strong bet to deliver it. Mayweather, a welterweight in truth at this point in his career, has already moved up in weight to face Canelo, to 152 pounds. At age 36, he is more vulnerable than he was earlier in his career, with signs of his brilliance fading slowly over his last couple bouts. And Alvarez being challenging enough to create drama: It can happen. But will it?

The line on Alvarez is that he's not good enough to beat Mayweather, that he's too inexperienced, that his best win over Austin Trout was a struggle, that he's a hype job. All but the final bit are mostly defensible. The "hype job" part is only a little defensible. The hype is, indeed, heavy for Alvarez. But nobody had beaten Trout until Alvarez did, and nobody had knocked him down as a pro until Alvarez did. Sure, Alvarez has some over-the-hill types on his resume, some undersized types on his resume, but he has beaten enough quality fighters (including Ryan Rhodes, a top 10 contender at the time) that he deserves to be considered the #1 junior middleweight in the world. Maybe in a division with less parity, that wouldn't be the case. Mayweather is #2 largely by virtue of having beaten (in a competitive fight) Miguel Cotto, who was #1 at the time on a relatively thin 154-pound slate. Trout got into the top two by beating Cotto himself in Cotto's next fight, and then came Alvarez.

You don't do what Alvarez did if you're a pure hype job. And it's hard to imagine who has a better chance of beating Mayweather right now at 154 or below. Juan Manuel Marquez? Maybe now that he's adjusted to welterweight he'd perform better against Mayweather than the first time around, but he's not more threatening to Mayweather than Alvarez. Manny Pacquiao? Even in his prime Pacquiao would have been the underdog against Mayweather, but he would be a far bigger one in 2013 after our last image of Pacquiao was him flat on his face courtesy Marquez. The list drops off badly after those two.

What makes Alvarez the most threatening available opponent is size, youth and enough ability and intelligence to make it at least plausible that he can trouble Mayweather. As we covered in the keys to the fight (links above), Mayweather is no junior middleweight, and Alvarez is a big 'un. At the weigh-in Friday, trying to go down from 154 to 152, Alvarez made weight without looking hopelessly drained, even if he didn't exactly shine with the happiness of a man who was loving life at the weight. This could be a factor in the fight, one that turns Alvarez's advantage into a partial disadvantage, but at least we know he probably didn't lose the fight on the scales.

He's also still 23 years old, which is a lower number than Maywather's 36. And he knows how to fight. He isn't anywhere near as intelligent as Mayweather, yet it's not like anyone else is, either. To have a chance against Mayweather, you have to show him something he hasn't seen before. There are certain things that have a track record of giving Mayweather trouble, only they're all history right now. A good jab. A southpaw stance. Counterpunching. Unrelenting pressure. Having speed that approaches his. The newest version of what worked against Mayweather is what Cotto did, which was to pressure him, but to step around while punching him with his back to the ropes, to step in and out and vary it up so he can't predict what's coming. Mayweather eventually figured even that out against Cotto and completely took over the fight late. But it's still the newest trick in the book, and the one Alvarez can most likely replicate.

Alvarez's footwork and experience aren't up to Cotto's snuff, so if he takes the Cotto strategy as he hinted he might on an episode of All Access while watching Mayweather-Cotto and in his public descriptions of his plans, he'll have to hurt Mayweather more than Cotto did (Cotto bloodied and pufed up his face, but never wobbled him; Alvarez is a harder-hitting junior middle). He'll have to get hit less (Alvarez's defense is probably better than Cotto's). And he'll have to throw more punches (this could be a problem based on Alvarez's track record of a punch output lower than is ideal). He'll have to hope that Mayweather is aging and more stationary at 154, rather than having become more stationary over the years under the tutelage of uncle Roger before switching back to a more defensive style under current trainer Floyd Sr. And all of this is contingent on the assumption that Mayweather hasn't totally figured out how to handle a Cotto-like strategy already.

Because if he has, then all that can win this fight for Alvarez is a knockout. And he'll have to sell out to do that. Selling out might work. Mayweather hits hard enough above 147 to have wobbled Cotto and Oscar De La Hoya late, but both of them had more miles on the odometer than Alvarez does, so maybe Alvarez can take Mayweather's power better. Alvarez hits harder at junior middle than both of those men did too, probably, which gives him a better chance at scoring the KO.

If he did it, it would be one of the most shocking moments of this boxing generation. It would be one of the all-time greatest wins in Mexican boxing history. Mayweather is a great fighter, and whatever you think of how he would have fared in another era, he is this era's greatest talent. That an Alvarez knockout would be so shocking and historic gives you a sense of how unlikely it is. Outpointing Mayweather on the scorecards is even more unlikely, absent a knockdown or two, because Mayweather is superb at winning unanimous decisions.

The most I can give Alvarez is a knockdown, early, after pulling a stunt Mayweather doesn't anticipate and he discovers that Alvarez punches with more net force than anyone he's ever faced. Even a knockdown would be shocking, though, and that's why I think we'll get some drama one way or the other early. Mayweather will recuperate quickly, and/or Alvarez won't seize the moment. After adjusting, as is Mayweather's wont, he'll get very, very cautious, sticking and moving, holding without shame and doing enough to win each round clearly and without much danger. Canelo will go into that intellectual coma to which Mayweather sentences all of his opponents, or run out of steam late, or both, with maybe one last round of competitiveness after his early success.

It might be two rounds of excitement, 10 rounds of non-drama and a wide unanimous decision. But Mayweather winning at all will be more proof than we usually get that he's as good as we think he is.