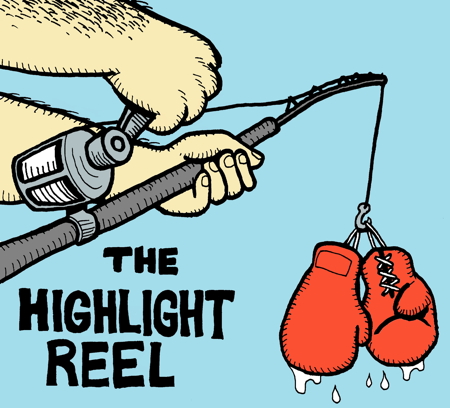 The boxing bits blowing our hair back this month… 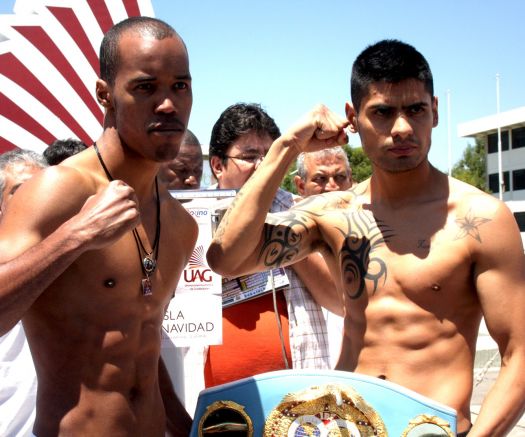 For all my moaning about the lack of quality fights on the boxing schedule, there will actually be some good bouts in March (it had to happen eventually, if only by pure chance). If I can, I’ll be keen to see Transnational Boxing Rankings Board junior flyweight #4 Donnie Nietes take on the stawweight #2, Moises Fuentes, this Saturday. For micro-people, these guys can crack. Also really glad to see that a junior lightweight rematch between Juan Carlos Salgado and Argenis Mendez (pictured — left and right, respectively) will be part of the HBO tripleheader on March 9. The first fight was a cracker, featuring swings in momentum like you wouldn’t believe, but the result was scandalous; the referee carried Salgado through the final round after he was dropped and the scoring left much to be desired. Hopefully Mendez will be able to right those wrongs in the ring. 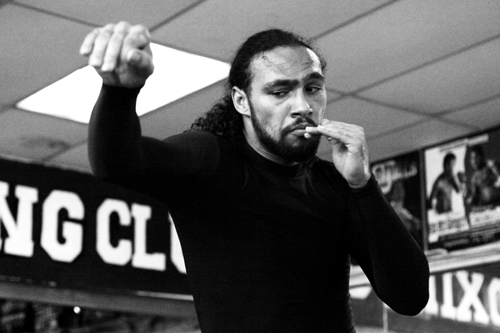 Henry Miller once called New York City “a whole city erected over a hollow pit of nothingness.” Clearly he was just a hater, because The City That Never Sleeps hosts a few notable skirmishes this month. Starting this weekend, Sharif Bogere takes on Richard Abril at a legendary venue in The Apollo, while perennial “hot prospect” Gary Russell, Jr. shows up in the co-feature against what looks to be a fairly safe opponent in Russian Vyacheslav Gusev. Needless to say, the more interesting venture on that Showtime broadcast is Abril’s third go at some type of WBA lightweight strap — his first bout since fighting (and in the eyes of many, beating) Brandon Rios last April. But next weekend, HBO airs an interesting double feature from the barely-christened Barclay’s Center in Brooklyn, in which the seemingly ageless Bernard Hopkins meets Tavoris Cloud in the main event, while Keith Thurman (pictured) continues his march toward legitimacy against Jan Zaveck. Between those two fights, one would think something worthwhile will unfold. Even ESPN2 gets in on some Upstate New York action with a middleweight bout between ballsy Grzegorz Proksa and tough Ghanaian Osumanu Adama on March 29. Keep ’em honest, Lou Reed. 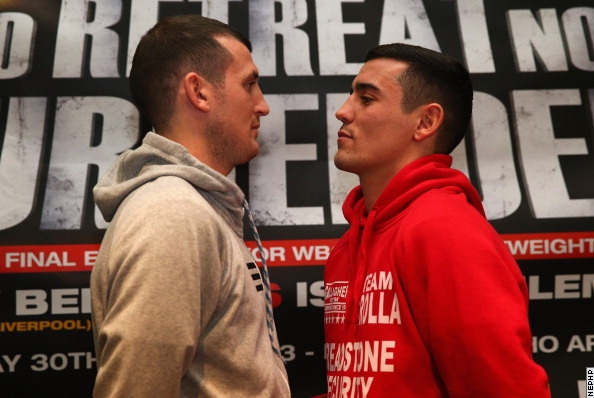 Dewsbury golden boy (and personal favourite) Gary Sykes returns on March 15. The former British boss tackles unbeaten Grimsby man Kevin “Super” Hooper (who earns bonus points for tipping the wink — incidentally or otherwise — to a 1978 stuntman character played by Burt Reynolds) in Cleethorpes, and I haven’t totally ruled out a road trip to catch it live — as a paying customer even! Sykes was last seen out-hustling Anthony Crolla and then being similarly out-hustled (somewhat contentiously) himself by Terry Flannigan in a recent Prizefighter tournament. The duo will contest the vacant English title at 130 lbs. Matchroom meanwhile have put together a can’t-miss card on March 30 in Liverpool. Light heavyweight climber Tony “Bomber” Bellew features alongside exciting Scouse prospects Rocky Fielding, James “Jazza” Dickens, Callum Smith and Tom Stalker, however, all eyes will be on the lightweight grudge match between Crolla and “Dirty” Derry Matthews (pictured — right and left, respectively).