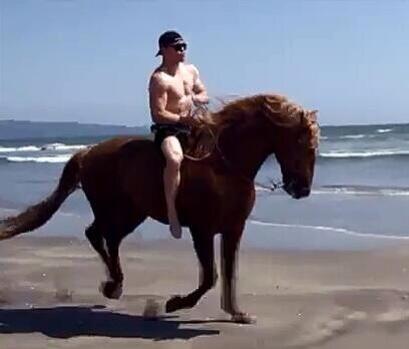 That's Canelo Alvarez getting his romance novel cover on, from a still from Saturday's episode of All Access. The episode gave people plenty of things to laugh about and talk about besides Canelo's topless bareback adventure, which marks an improvement from the Showtime series' handling of Floyd Mayweather's last fight. We had Mayweather vocally hoping that the Mexican people wouldn't throw urine on him, as if urine-tossing is a national Mexican pasttime. We had Canelo kicking off the episode discussing his love of shoes, then working out later in a gym that had pit bulls stationed on a ledge for some reason. We had pictures of Canelo's childhood, where he was dressed up like some kind of cowboy/Raggedy Andy doll, followed by his mother wondering why he got in so many fights as a youth. We still had to put up with some Mayweather "I'm young, fly and flashy" rehearsed b.s., but at least it wasn't camera shot after camera shot after shot of Mayweather luxuriating in his wealth like with All Access for the Robert Guerrero bout in May.

We also had some good fights this past weekend, and fodder for debate. What's next for Jhonny Gonzalez? Did Arthur Abraham win or lose his fight Saturday? What about the topics in the headline? We have all that and more waiting for you with the click of your mouse.