Would that I could equal the star power of actress Emily Blunt cheering on “Hammersmith boy” George Groves, but as a Nottingham native I am a huge supporter of Carl Froch in this weekend’s rematch between the pair. Indeed, it is the way he reflects the salt of the earth character of Nottingham that has me happily admitting I want him to win, which is not to say I think he will.

When Kirkland Laing scored a split decision over Roberto Duran back in ’82 it was perceived by many that this would be as good as it would ever get for Nottingham boxing: no belt at stake, just a lazy, supremely talented under-performer travelling to Detroit to make an all time great look anything but.
Fast forward 32 years and Nottingham now has Froch heading into a career-defining fight against Groves in possibly the biggest boxing match-up in British history.
Froch lives about a mile-and-a-half from me, both of us in unremarkable suburbs of Nottingham — an unremarkable town in an unremarkable region of the country struggling for identity and a serious lack of famous inhabitants. We don’t have a successful soccer team of note, and as a rule no one likes our bland midlands accents.
Some names linked to Nottingham in the past are Robin Hood (expert thief but an all round good egg) and Brian Clough (allegedly corrupt but very successful ex-soccer manager). This pair were actually born further north in Yorkshire and Teeside, which makes the city’s claim to them a bit hollow. More recently however, there has been Jake Bugg (a young singer from the tough Clifton estate in the south of the city) and of course, ‘The Cobra.”
Froch is Nottingham through and through. He often talks about returning to work with his brother in the building game after a big fight. He drove himself to the Lucian Bute fight at the city’s ice arena shortly before the ringwalk, much to the shock of his promoter. He is, underneath his apparently arrogant exterior, a regular guy: a lad from Nottingham with an awkward accent, who has to show a degree of belief given the game he’s in and his status of top super middleweight. 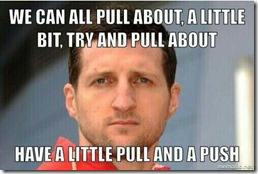 My genuine view — my love for my city aside — is this: Froch isn’t totally happy in the limelight. He says the wrong things, he gets facts mixed up, and his line about pushing and pulling in the recent Sky faceoff was Froch all over.
I cringe at some of his interviews. I worry Groves will make him look silly in the head-to-heads, that Froch will lose fans every time he mentions his “legacy.”
His appearances on television are in sharp contrast to Groves, who has played with his Rubik’s cube, displayed confidence verging on cockiness and taken every opportunity to belittle his opponent. But I don’t buy for one minute that he is indeed as smart as he perhaps thinks. On the other hand Froch is probably a lot smarter than people give him credit for, so please don’t be fooled by the uninspiring regional dialect. He has attended nearby Loughborough University and went to two relatively good secondary schools in the area. His past performances mean he is rated as a world class fighter, but he is not at the same level in front of the cameras.
In the ring, Froch is a warrior but there is no finesse to what he does. He doesn’t possess great footwork, he doesn’t pick his punches like Groves and he leaves his chin out there to be routinely hit by the straight right. His technique is poor all across the board but is there a tougher fighter in world boxing? If he were Mexican or Argentinian, U.K. boxing fans would be heralding his grit, his battle, his refusal to be broken down, yet we don’t. We have an inexcusable habit of knocking our best fighters. Amir Khan is a great example; at only 27, we should be in awe of his achievements — but instead we point to his shortcomings. It’s a poor way to treat your stars but sadly it’s the British way.
We all like the “hard knocks” stories in boxing; Floyd Mayweather, dodging bullets at a young age, Lamont Peterson living on the streets, and Bernard Hopkins’ stint inside prison. There’s none of that with Froch. He grew up in a little place called Colwick, no struggle, no bullet wounds. In fact, Colwick is more or less 50 percent industrial estates, so you can imagine little of note occurring there.
Froch is trying to be a world star, a status that I honestly believe he’s genuinely uncomfortable with. Having watched the build up thus far and being able to watch the first fight again with side by side analysis, I am struggling to see how Froch can avoid a repeat. Groves is technically so far ahead and he showed it for six rounds last November, dishing out a beating only Froch could have taken. I don’t necessarily agree with those who say the fight will not live up to its billing. The styles of the two boxers will always lead to an open fight and I expect little difference this time round.
Maybe, just maybe, Groves gets him out of there early in the rematch. Maybe Froch drags him into the championship rounds and ruins Groves long term. Who knows? Certainly not me. But what’s not to like about this clash of speed, technique and boxing ability versus raw toughness? A Nottingham toughness that Froch possesses in abundance.
Regardless of the outcome he will always be a hero of mine and to most in Nottingham, just like Robin Hood — the only difference being Froch was born here as opposed to the Yorkshireman.
ShareTweet

David Scott is a lover of boxing, roofs and writing; dad of two beautiful girls, and partner to their beautiful mother; and first team coach at Southwell City FC.