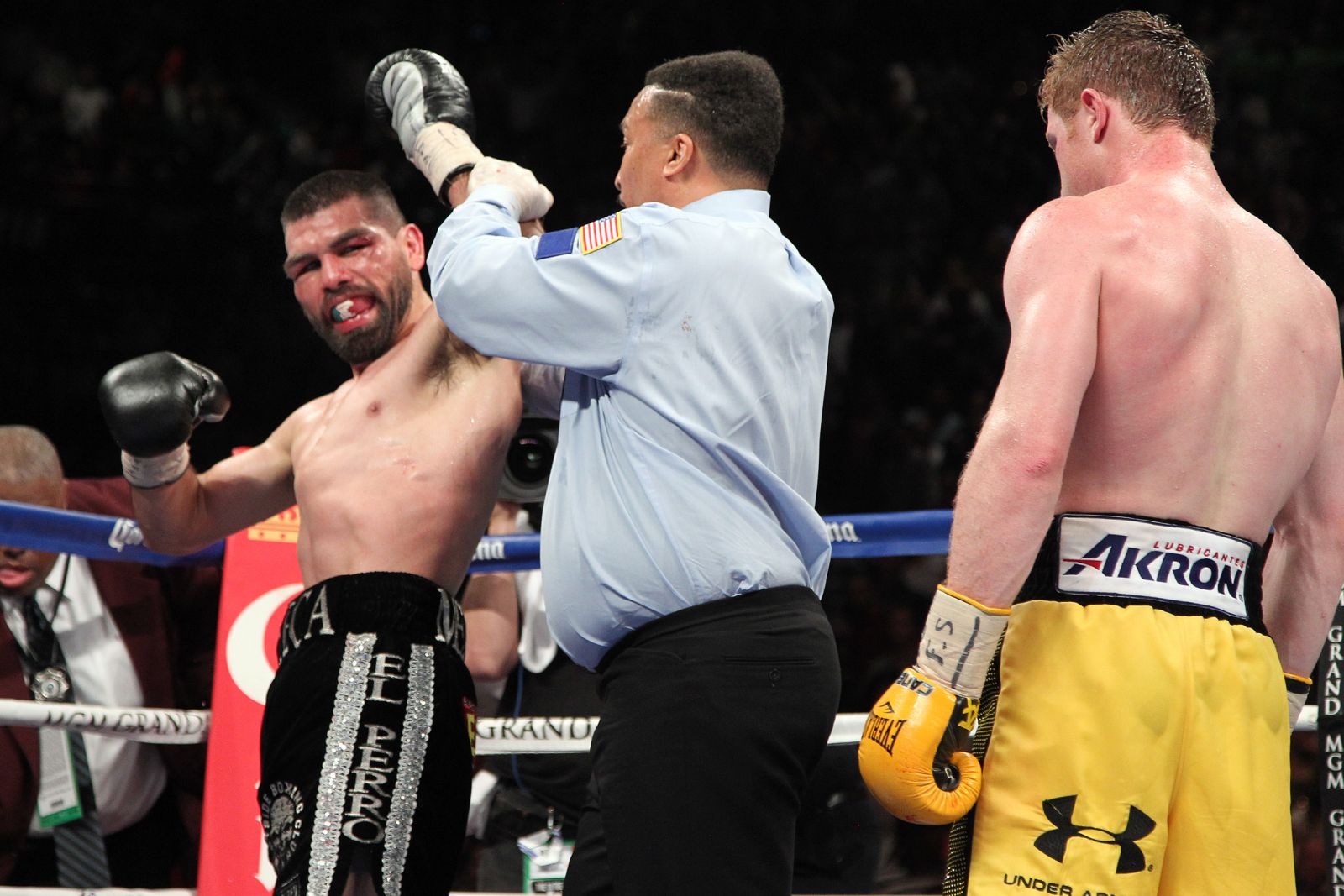 From the opening seconds of the 1st round until the fight's end — more on that very soon — Canelo Alvarez rained down full force, total leverage power shots on Alfredo Angulo of such resounding violence that it was hard to believe Angulo's face wasn't rendered into wet papier mache. Angulo, meanwhile, was slow even by his usual three-toed sloth standards, and there was no oomph to his punches for the vast majority of the fight, it was like he was trying to land half-hugs rather than blows. Referee Tony Weeks saw enough of the Showtime pay-per-view headliner Saturday evening in the 10th round.

The crowd booed Weeks' decision. They should not have. Angulo was still defending himself, certainly, and he was in no special danger at the moment of the stoppage compared to moments before. But his trainer Virgil Hunter told Angulo he would stop it after one more round unless Angulo turned it around, and Showtime's Paulie Malignaggi, among others, suggested going into the 10th that Angulo should be examined closely. Apparently he was, and apparently the doctor didn't like what he saw, and apparently Hunter argued for one more round. But it was evident in that 10th that nothing was going to change, no matter how much Hunter played to the crowd about how Angulo was "coming on." (Hunter has his blind spots, but none bigger than that for Angulo, whom he claims to this day only lost to Erislandy Lara on a thumbing that nobody impartial saw and that it was questionable even could happen.) We witnessed what happened with heavyweight Magomed Abdusalamov late last year in a bout where he took tons of power punches, was still defending himself and there was no "perfect moment" to stop it: coma and permanent neurological damage.

About the fight, then: Those who thought Angulo would be competitive on the strength of his performance with Erislandy Lara, myself among them, were woefully wrong. This Angulo looked nothing like the man who fought Lara. It's not clear why. Perhaps the Lara fight was the straw that broke the camel's back for a junior middleweight who has practiced the "manly art of no defense." Perhaps he overtrained. Perhaps Canelo, by putting him on his back foot, defanged Angulo, as Malignaggi suggested, but that couldn't have been it entirely because on the occasions where Angulo was able to move forward, it's not like he was rocking Canelo's world. Perhaps his critics were right and Angulo was just plain terrible, although the Lara performance debunks that for me; it is true that he has always come up short in the big ones, however. One way or another, something looked wrong with Angulo compared to the version we've seen in the past.

And Canelo was right there to capitalize. He rarely threw anything — a jab, an overhand right, a sweeping left, uppercuts, body shots — with a level of commitment below 100 percent. No longer sharing the ring with today's finest pugilist, Floyd Mayweather, and sharing it instead with Mayweather's complete opposite, he was an offensive and defensive juggernaut. After about the 4th, Angulo began to land the occasional hard shot, and Canelo's scuffed face was evidence of it. The 8th was particularly sizzling, with Canelo doing his best shoulder-rolling impersonation of Mayweather along the ropes, a bit of toying that inspired Angulo into some of his fiercest attacks. But even then, even with each man waving the other on in a blood-pumping display of Mexican machismo, it was Canelo who got the better of the exchanges.

The natural next opponent for Canelo is Lara, which presents a thorny dilemma for Showtime. Canelo fancies himself a PPV star, and in this battle of Mexican fighters who offered a sharp contrast — Angulo the blue collar brawler, Canelo the blue-chip prospect slowly being nurtured into the next Oscar "Golden Boy" De La Hoya — very well could have broken even or better. Would Canelo-Lara? Hard to imagine how, unless the extremely popular Canelo does massive figures against Angulo, heralding his arrival as a full-fledged PPV supernova. And that doesn't sound likely.

In the end, although it had its moments, this PPV was a disappointment, too. The undercard lost action star Omar Figueroa to an injury; it lost the little-anticipated but evenly matched Carlos Molina-Jermall Charlo to Molina's stint in jail; Canelo came in a pound heavy, reminding too many fans of recent weight high jinks that have soiled various bouts; and only one fight on the main PPV undercard card was competitive at all, Sergio Thompson-Ricardo Alvarez. Some of that was bad luck. Or maybe it was a message.