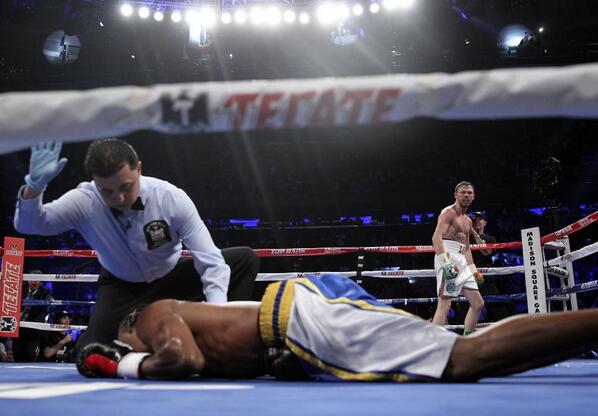 Jose Lopez, the undefeated (12-0) Puerto Rican featherweight, took on tough veteran Raul Hidalgo (21-10) in an eight round scrap that saw good sporadic action in front of a restless crowd. The young prospect showed good speed, poise and fought smartly against a determined Hidalgo.

Midway through the fight, however, the partisan Puerto Rican crowd was restless as Lopez fought off the back foot looking to counter punch more than they would have liked.

A smattering of boos rung out periodically as the fight seemed well in hand and Lopez played calm matador to Hidalgo’s bull forward style.At the end of 8 rounds the judges awarded Lopez a one sided victory by scores of 80-72 twice and one score of 79-73.

Another undefeated Puerto Rican, 12-0 lightweight Felix Verdejo, stepped in to fight Mexico’s Engelberto Valenzuala (9-1) in the final undercard bout before the televised portion of the PPV card. Even the half empty arena, already filled with Cotto supporters, managed to raucously shake the rafters with a cacophony of support as the Puerto Rican was introduced.

Verdejo did not disappoint against his overmatched and soft-physiqued opponent. Within moments a series of hooks had shaken the Mexican and set him off balance. The undefeated prospect swarmed him into a corner and scored a knockdown that sent the overwhelmed Valenzuala to his knees. Though he easily beat the count, the referee swooped in not long after as a volley of follow up shots were going unanswered and ended the bout. Verdejo improved to 13-0, barely working up a sweat as he stopped Valenzuala at 1:17 of the 1st round.

The 1st round ticked by as most do, with a feeling out process. However, two thirds of the way through a solid connect sent Lee into the ropes. Moments later an overhand right caught Lee on the chin and sent him sprawling to the mat.

Jackson tried to press his advantage, but Lee fought well off the ropes to make it through the remaining frame. The 2nd round saw less drama, but Lee looked anxious when punches started to fly toward the end of the stanza, sensing he needed to make a statement and show Jackson something.

Round 3 Jackson fell into stalking his man but not throwing many punches, Lee looked to land his sunday punch, the right hook coming from his southpaw stance. Lee did well establishing a bit of rhythm.

The 4th came and went with little to separate them, each seeming to measure the other and only fight in spots.

Round 5 produced fireworks and would end up as the final round these two warriors would go at it. Midway through, Jackson stung Lee with a series of blows that drove the Irish fighter to the ropes and stumbling across the ring. Moments later as he came in for the kill, Jackson would get dropped viciously by a pretty Andy Lee right hook.

The Virgin Island native collapsed to the canvas and laid unmoving face down for several scary moments while referee Benji Estavez waived it off and medical officials rushed into the ring.

A warm round of applause greeted him minutes later as he finally rose to his feet and shared a laugh with the man he’d just fallen to. Andy Lee improves to 33-2 and enters the junior middleweight division with a bang.

Junior middleweights Javier Maciel and Jorge Melendez, from Argentinian and Puerto Rican respectively, looked to fire off the first salvo in the battle between nations leading up to the Cotto-Martinez showdown later in the evening.

Maciel, filling in for Yuri Foreman who retired after agreeing to the bout, came out with fast hands, looking to unload to the head and body. Melendez warmed up midway through and each man had their moments.

By round 2 Maciel looked like he was losing just a little steam. Melendez took the opportunity to go to the body and strayed low several times, eliciting the referee to repeatedly warn him.

After a few more warnings, round 4 saw a point taken from Melendez on a very low blow. Maciel took umbrage with it and came out firing from his rest period. A phantom punch appeared to send Melendez to the mat and at full speed the referee couldn’t be blamed for calling it a clean knockdown.

Maciel continued to pepper Melendez with real, connecting, shots the remainder of the round and into round 5. Finally Melendez seemed to wake up and regained some momentum with several effective series of blows.

By round 7 it seemed like Melendez should have been more anxious to win rounds, having lost a point and suffered a knockdown; however, it was Maciel pushing the fight and pinning him to the ropes to unload digging shots.

As the final rounds wore on conditioning started to be a factor for Maciel. Taking the bout on short notice as a substitute, his punches began to look labored and the power behind them seemed questionable.

His determination, however, was never in question as he continued to bore forward and sling shots at his Puerto Rican foe.

Finally Melendez came out in the final round with a sense of urgency, but Maciel met him and fired back in kind. By mid round it was the underdog Maciel once again pushing his man back to the ropes, unloading and giving his all.

Featherweights Marvin Sonsona and Wilfredo Vazquez, Jr. met for the second time as chief support to the main event in a follow up to their 2010 bout which Sonsona lost by KO in four rounds.

The southpaw Filipino, Sonsona, looked to come out early and make a statement. He dropped Vasquez with a wicked body shot early in the opening stanza and looked sharp in the round.

Vazquez steadied himself over the next few rounds though his offense paled in comparison to the dynamic punching that Sonsona could flash out in spots.

By round 5 Sonsona had cooled a little, however, and Vazquez had worked himself into the fight.

In round 6 a frustrated Sonsona decided to blatantly rabbit punch his foe and the ref immediately took a warranted point.

A bad head butt flush to Sonsona’s face in round 7 and then an accidental low blow moments later certainly didn’t ease whatever tensions were brewing and Sonsona went low on Vazquez after another minute.

Neither man likely made particular impact on any spectators throughout the fight, looking a little sloppy and only fighting in spurts.

An ugly match for much of the time, the final round found them tumble to the ground together and the referee dodging as many blows as the two of them in a scrappy foul filled meeting.

After 10 rounds Sonsona avenged his earlier loss to Vazquez Jr. by Split Decision with one judge seeing it 96-92 for the loser, but being overridden by the other judges with two scores of 96-92 for the Filipino who improves to 19-1-1. Vazquez meanwhile drops to 23-4-1.