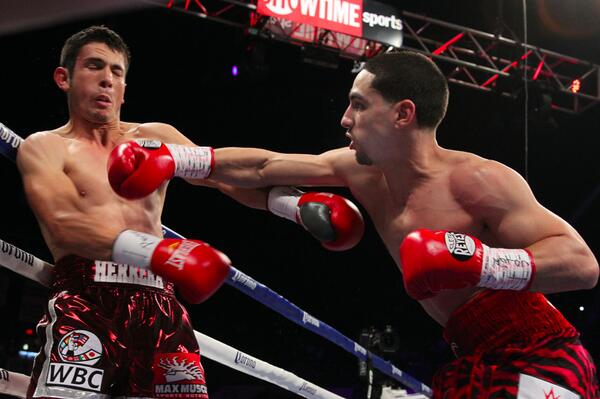 Junior welterweight champion Danny Garcia was trying to get an easier match-up than he has had of late, and to do it in Puerto Rico, the home of his heritage rather than his place of birth in Philly. It was fringe contender Mauricio Herrera who switched up the Garcia plan most dramatically on Showtime Saturday night, giving Garcia more trouble than anyone ever has — a list that includes Erik Morales, Zab Judah and Lucas Matthysse. Garcia escaped with a wider decision than was merited.

I scored it 115-113 for Herrera. Some scored it for Garcia. Most scored the bout for Herrera, though, and few had it 116-112 the way two judges did. There were elements of the fight legitimately difficult to score, namely how Herrera was landing so many jabs and Garcia was mostly landing power punches, however infrequently overall. Herrera did everything he could to make Garcia uncomfortable, to throw him off balance. His defense was excellent; he was very cognizant of Garcia's primary weapon, his left hook and either ducked it or smothered it in clinches. He also kept his jab in Garcia's belly and lunged from awkward angles with overhand rights, sometimes setting them up with feints. Garcia was, for most of the fight, flummoxed.

He did, however, connect with his share of showy punches. He found a home with a left to Herrera's body, and with an uppercut that he threw when Herrera ducked low. Through six rounds, it was a largely even fight. But Herrera had a good stretch from the 7th to the 9th, especially at the end of the 9th when he caught a retreating Garcia with an overhand right and jab that burst blood from his nose.

Garcia, to his credit, rallied big in the 10th and 11th. He started dialing in his right hand, and stopped getting backed up out of sheer confusion. Herrera was ready for this version of Garcia in the 12th, and came out with double the energy, blasting Garcia late in the round with his hardest punches of the fight.

Puerto Rico had Garcia's back. He might not speak Spanish well, but the fans cheered him on and the judges were on his side, too. Since he was the champion, he might also have benefited from that old (unfortunate) cliche that to beat the champ you need to do so definitively. As for why he had as much trouble as he did and what it means: Herrera had a terrific game plan and executed it well; what Garcia said afterward about everyone coming extra-hard for him as the champ is probably true. Garcia might be struggling with the 140-pound weight limit, too — which might make a commercially viable meeting with Lamont Peterson difficult. Whatever you think of the decision, Garcia's stock took a hit tonight. It's hard to sell him as a future opponent for Floyd Mayweather when he struggles with any version of Mauricio Herrera.

On the undercard, heavyweight prospect Deontay Wilder continued his maturation toward contender with his latest 1st round knockout, over the best opponent of his career, Malik Scott. Very little of note happened before Wilder stopped him. Immediately, conspiracy talk emerged that Scott had taken a dive. But Wilder's left hook definitely connected on Scott's temple, and the right hand that followed it made contact, too, albeit not as much thanks to Scott partially blocking it with his gloves. I see little cause for doubt about what happened here. Wilder is a pure puncher who landed the kind of shot that's known to ruin fighters' equillibriums.

He'll be in line for a shot at the winner of Bermane Stiverne-Chris Arreola II. That fight will tell us more about who Wilder is than any of his previous fights combined.