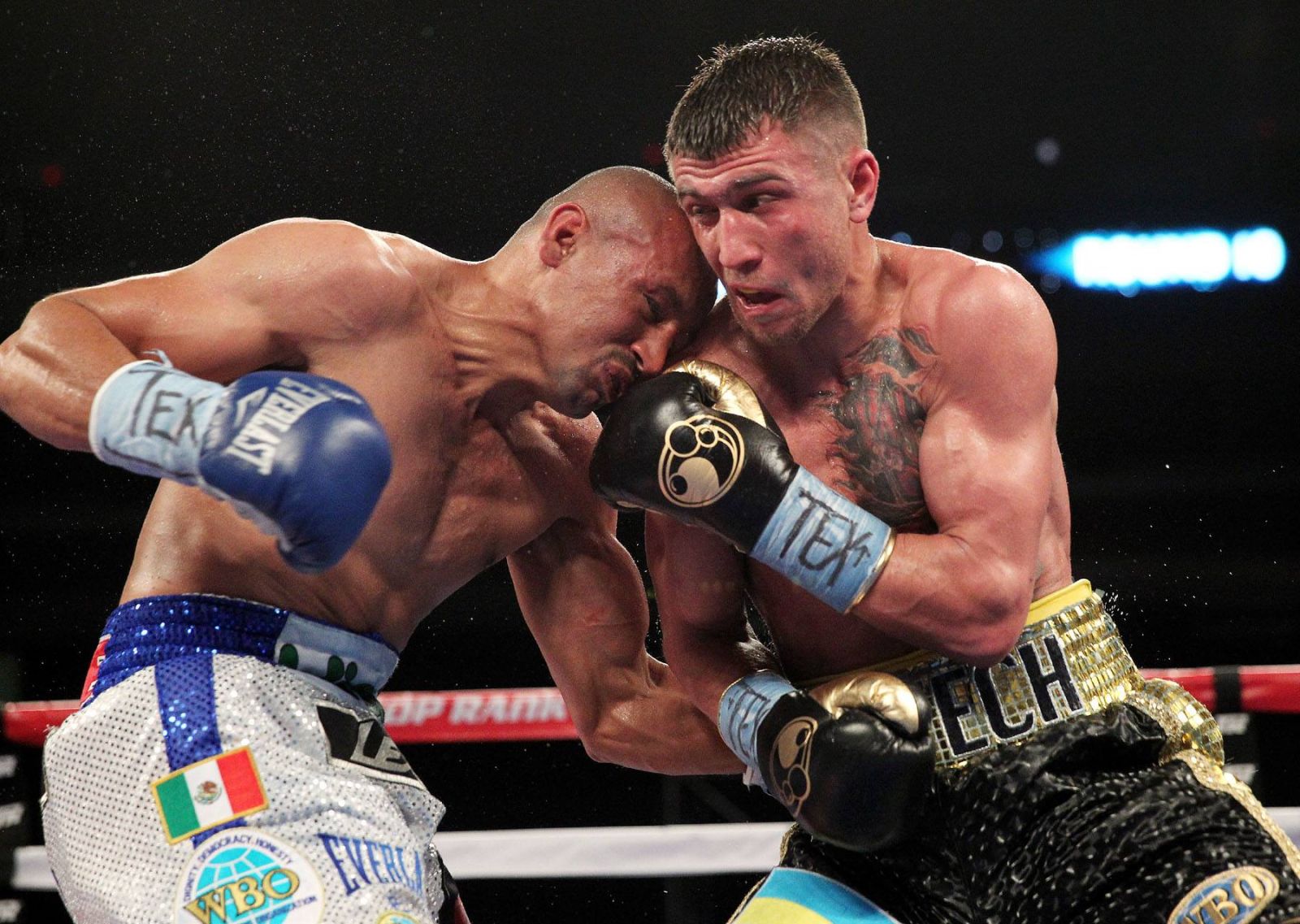 There was nothing wrong with the judges' scorecards in the HBO meeting Saturday between grizzled veteran Orlando Salido and amateur great Vasyl Lomachenko, only with Salido's exploitation of missing weight and all the low blows he threw in the bout. It did the trick: Salido got a split decision win in San Antonio. It was the rare occasion where the judges getting it right was unfortunate.

Salido missed the 126 pound limit by two pounds and didn't bother trying to make it Friday. He then blew up to 147 pounds between the weigh-in and the fight, compared to Lomachenko's fight night weight of 135. That's two divisions' difference. Lomachenko appeared wary of the size advantage from the start, cautious with his punch output. On top of that, the crafty Salido outboxed him early — he was especially smart in clinches and coming out of them, finding openings Lomachenko couldn't — so it's not like the cautious Lomachenko approach translated into him racking up points smartly.

Salido's body work throughout was impressive. His low blows, which were legion, were not. Oh, they were effective — he didn't even get warned until the 8th. They were just a turn-off. Referee Laurence Cole got snookered on some of them, with Salido using his savvy to throw low blows at angles Cole couldn't see. But some of them were obvious no matter where you were standing. Cole is a dolt, plain and simple; after a stretch of him not being involved with any controversy, I suppose we were overdue.

Lomachenko did start to surge in the mid-late rounds, as Salido began to tire, at one point falling down for no apparent reason. And Lomachenko charged for the knockout in the 11th and 12th, doing major damage in the 11th and nearly getting a 10-8 12th because he beat up Salido so severely, nearly dropping him with a straight left. Lomachenko held a ton, which Cole warned him for far earlier than he did Salido's offenses. In the 12th, Salido held on for dear life, and won by scores of of 115-113 and 116-112 to nullify the 115-113 card for Lomachenko.

Much was made about Lomachenko fighting for a title in his second bout. I'm not a fan of the alphabet titles, and I'm not impressed by Salido winning the one he won against Orlando Cruz, who transparently got the title shot not on the merits but because of the novelty of a gay fighter trying to win a bout. It's a stunt title, this 126-pound WBO strap — what novelty opponent will be found for it next, now that Salido is without thanks to the weight shenanigans? I was impressed, however, by Lomachenko wanting to take on such a wily, hardened pro so early. As it happened, Salido gave him a cruel introduction to several aspects of the pro game. In the pros, you can miss weight flamboyantly and use it to your advantage later. In the pros, if you're fighting in Texas, you'll be subjected to a jurisdiction with a track record of incompetence or worse. In the pros, you'll meet guys like Salido, who knows all the tricks — above board and below — and will punish you to the body unlike any amateur will.

There are good fights for both men now, at least. Lomachenko would be wise to slow it down and learn some of those tricks himself, get some experience; that he nearly beat Salido despite all of the ugliness speaks well of his pro prospects. Salido will find opponents with which he can make exciting bouts at 130, a weaker division than 126.