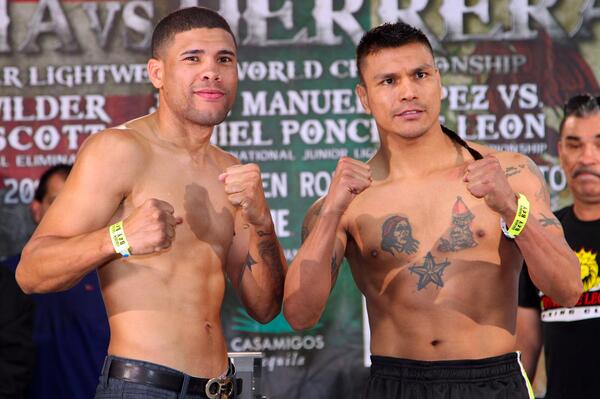 “He’s just got your number.” We hear that phrase when one opponent dominates another and there is no good explanation for it. Juan Manuel Lopez (34-3, 31 KOs) seems to have Daniel Ponce De Leon’s number, even if he got a bit of help Saturday evening on Showtime Extreme in a junior lightweight rematch.

In my preview, I saw this as a fight that I didn’t want to see. The 1st round featured two men who weren’t sure that they could absorb each other’s punches. It was a quiet, tactical affair. Perhaps, I should say it was boring. I was now doubly sure I didn’t want to see it.

Then in the 2nd, it turned into what it had to be: a war, two fighters who will take two punches to land one. They traded on unequal terms, the scale shifting based on who landed last.

Lopez went down. Ponce De Leon went down hard. Then went down again, but it was more of a push/fall. They traded along the ropes with Lopez getting the better of it. Suddenly the ref stepped in.

That it would be a war was my expectation of this fight, but I figured Ponce De Leon (45-6, 25 KOs) had too much for Lopez, who I assumed could no longer take a punch.

I was half wrong. Lopez can’t take a punch anymore. Ponce De Leon dropped him in the 2nd and shook him repeatedly. However, Lopez can still punch, and his right hook is still Ponce De Leon’s kryptonite. Once Lopez had his foe hurt, he poured in on like the JuanMa of old. But he isn’t that fighter.

I would be very happy if both fighters retired. For smaller fighters (anything under welterweight), they’ve both had long careers and have given the fans many memorable fights. Neither is a match for anyone at or near the top at 130 or 126.