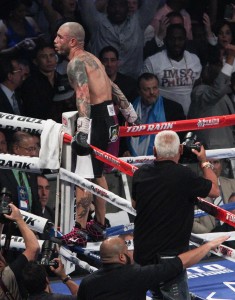 It’s been a few years since we last went through this exercise of looking at the lineal championship (aka real champs, as explained here) picture in every division, partially because a major thing has changed since then. There was a controversial overhaul of the policy by Ring Magazine, the long-accepted custodians of championship lineage, and the creation of the Transnational Boxing Rankings Board as a result. As a chair and founder of that Board, I thought it best to give the annual list for this site a break for a bit.

There are currently eight lineal champions per the Board, for a vacancy rate of just below 50 percent. That’s more than you might expect in a sport where the two major promoters haven’t been working together, and where now that they might, one of them is split in half by internal divisions.

Looking into the next year at the vacant crowns, there are three divisions where the #1 and #2 almost certainly will not meet to establish a new lineage; one where at least one side wants to get it on; another where there’s a plausible scenario whereby a vacancy could be filled; and the remainder are made up of scenarios where it could happen, but it doesn’t seem to be on the map at all.

And then there are some situations where the championship could change hands.

Examining the vacancies, a large number of the #1 vs. #2 match-ups would qualify as one of, if not the, best fights in the division. That’s not always the case, but that and past editions of this list do suggest there’s a tendency.

There are other things to be learned from this, too. I’ll let the rest of them speak for themselves.

Prospects: At 38 and always in peak physical condition, there’s no reason to think Klitschko can’t rule the other big men for many more years. His brother Vitali was 41 when he last fought, still looked dominant and wasn’t the specimen or devotee to boxing his little bro is. Wlad has done almost everything you could ask of a champion: He has taken on all the top challenges of his time other than the aforementioned Vitali, and it’s hard to blame him for that. Anyone on the horizon who has a realistic chance of knocking off Wladimir still only has a remote one, like young, green (but fast, tall and powerful) Deontay Wilder. If there’s one more thing Wlad could do it would be to embrace advanced drug testing, something he has lamentably not done.

Prospects: Huck and Hernandez share a trainer, and that man, Ulli Wegner, is blocking what would easily be the best fight in the division. It’s hard to be too up in arms about it — it’s more just that it’s too bad. These two are in their primes, have power, are vulnerable and have been in good fights, with Huck more the brawler and Hernandez more the boxer. Hopes for starting a new lineage rest on A. Huck abandoning cruiser for heavy for good, something he’s discussed before, but he is fighting at cruiser in August so the flirtations are just flirtations; or B. Hernandez getting knocked off and bumped down in the rankings.

Prospects: Stevenson is a vulnerable champion on two fronts. One, he was somewhat shaky, unexpectedly, in his last outing against Andrzej Fonfara, making the already plausible notion of him losing to Bernard Hopkins or Sergey Kovalev even more believable. Two, he’s the subject of a lawsuit by Kovalev’s promoter Main Events, and it has made Hopkins look at a possible Kovalev fight should Stevenson be on the shelf too long. It’s not a good thing, that prospect, but it does enhance the chances of a long stay at the top of the division merely because he’s not fighting.

Prospects: Ward came by his championship impressively in 2011, beating Carl Froch, who to this day remains the best contender in the division. Since then he has fought only twice and the odds of him fighting in 2014 feel remote. Without a couple injuries and a persistent court fight with his promoter, Ward surely would’ve been adding considerably to his championship legacy in a division with plenty of viable challengers. Instead, his prime is wasting away.

Prospects: The new champion is an odd one — he definitely beat the tar out of the old (in more ways than one) champion, Sergio Martinez, but doesn’t appear totally committed to fighting actual middleweights. The names bandied about for him include welterweight Timothy Bradley, which his team has at least commendably talked down,; Canelo Alvarez, a junior middleweight; and Floyd Mayweather, who’s somewhere in between. The man most people have considered the best middleweight — Gennady Golovkin, and there’s no contradiction there (you become champion by beating the champion or beating someone to fill the vacancy; the perceived best fighter in the division might be neither of those people) — is probably going to be waiting a while longer to be able to get the hardware.

Prospects: Mayweather is another tweener champion, in the way Cotto is more a junior middleweight than he is a 160-pounder, he is more a welterweight than a 154-pounder. But he hasn’t ruled out a return to the division, such as for the likes of Canelo, the man he beat to claim the crown. If he goes forward with plans to retire in 2015, the crown becomes vacant.

Prospects: We’ve been through this before, haven’t we? It remains the saddest missed match-up of the last five years or so, even if some of the shine has come off what would have been a perfect fight in every way when both men were in their absolute prime. One of them retiring is probably the best chance of a change in the rankings that could open up someone else to fight to create a new lineage, although both have been vulnerable of late and could lose soon, such as if Pacquiao met Juan Manuel Marquez and lost again.

Prospects: Garcia is lucky to be champion at all, since a fair number of people thought Mauricio Herrera beat him earlier this year. Now he’s hardly glorifying his status by taking on Rod Salka, a lightweight of little esteem, next. After talking up a possible move to 147, Garcia’s talking about fighting at 140 for the next several, although he’d look the champion more if he fought someone like Lamont Peterson or Chris Algieri instead of telling them they need to fight one another for the chance to meet him.

Prospects: Until recently, this was a realistic option, with both men promoted by Top Rank. But as it happened, Vazquez had no contract and has signed with Al Haymon, hated nemesis of Top Rank. Any fight with Vazquez in it isn’t going to be the most desirable in the division, but he would’ve been a very formidable opponent for the up-and-coming Crawford. That, and the chance to crown a new champion, would’ve made it at least somewhat appealing. And with as good as both of them have looked, smart money is on them inhabiting the top two slots for a good while longer.

Prospects: This is a helluva nice fight that doesn’t get talked up in proportion to how nice it is. Perhaps people assume (not without reason) that Uchiyama wouldn’t leave Japan, something he has never done, or that Garcia, a prized HBO project, wouldn’t go over to Japan… and even if the fight could be made, who would pay for it in proportion to how interesting it was or how high-profile it might not be in either country? That, along with Garcia’s legal fight with Top Rank, makes it all academic for now.

Prospects: Donaire-Gonzalez could happen, because there’s no big promotion rift involved, but the likelihood of it happening to crown a champ is on the lower side. That’s because Top Rank is talking about a quasi-tournament at featherweight, and there’s a murderer’s row of guys at 126 who could all take each other out before Donaire and Gonzalez met up as #1 and #2. If the process goes right, though, featherweight could crown a champion still.

Prospects: Rigo is about to be come a promotional free agent and it’s anyone’s guess where he’ll land. He’s not a hot commodity but match-ups with either of the top two contenders — Leo Santa Cruz and Carl Frampton — would be very interesting.

Prospects: Seriously, this is another of the best fights in the sport that nobody talks about very much. We’re talking two fighters with considerable skill and not inconsiderable power. And what’s even more bewildering about the silence is that there’s no evidence that this fight has been talked about by representatives of either side. Moreno hasn’t been shy about traveling for bouts, even if Yamanaka has. What’s the hang-up?

Prospects: Narvaez is probably the longest-serving clear #1 in his division not to have filled a championship lineage. That says a good deal about his competition and his division — he has always faced second-tier junior bantamweights, but nobody else has done enough to dislodge him from the top spot, which he’s inhabited since at least 2011. He’s due for a rematch in September of a controversial split decision win, so maybe that’ll dislodge him. The #2 slot moves around a lot. It’s not a deep division with anyone really well-established outside of Narvaez.

Prospects: Yaegashi has the boldest test of his unexpectedly good flyweight reign coming up in September, against Roman Gonzalez. If he wins, it’ll be the best victory of his career. If he loses, we’ll have a new champion. And from there, who knows. This division is wide open with all kinds of ridiculously good match-ups happening all the time. As of May, there was talk of Juan Francisco Estrada-Giovani Segura on the same September date as Yaegashi-Gonzalez. That’s some flyweightgasm right there.

Prospects: Inoue has just six pro fights and is little, so it’s not surprising that we don’t hear much buzz in his direction. Nietes has been around for a while but doesn’t get a fraction of the attention some other top Filipino fighters do. In a division where there isn’t much clamor for any particular match-up, it’s as good as, if not better than any.

Prospects: Whereas this is a little guy championship match-up that’s easy to get behind. Budler is flamboyant and talented. Takayama has rumbled with the best, winning some, losing some. Takayama is due to fight someone else in August, but Budler’s team wants some of him. Hopefully he’ll get him, assuming Francisco Rodriguez, Jr. doesn’t beat him first.