Three mismatches on paper become one on Showtime Saturday night, as Lucas Matthysse had to overcome a pair of knockdowns to beat John Molina in a fight where both men were coated in about one inch of blood head to toe, while action figure Omar Figueroa had to settle for a split decision win against slick-boxing Jerry Belmontes that he very well could’ve lost.

Only the main event fighter, welterweight Keith Thurman, got the mismatch that the sports books saw him having. Thurman came out in the 1st against Julio Diaz in fine boxer-puncher mode, using his speed and disguising his attack to set up that “One Time” power in his nickname. Diaz, a veteran undergoing a winless resurgence in his last three at welterweight (all were close, two against Shawn Porter and one against Amir Khan), didn’t seem prepared for the deception or speed, and in the 2nd, the power caught up to him, too, via a delayed reaction — or strategic knee? — knockdown. After a pep talk from his brother/trainer Joel in the 3rd, Julio came out more competitively in the 3rd, but a right uppercut to the body injured Diaz’ rib and between rounds, he retired.

No, it was no great win for Thurman, just a solid one. Nonetheless, Thurman is inching upward as a prospective Floyd Mayweather opponent. He’s a natural welterweight with power, speed and boxing ability, and a showdown with the winner of Shawn Porter vs. Kell Brook would put the winner of that sequence of fights in the pole position. 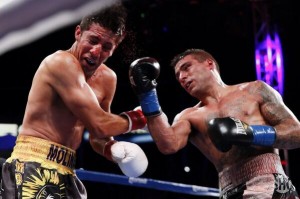 Matthysse-Molina stole the show. Molina, a lightweight moving up to junior welterweight to take on Matthysse coming off his loss to Danny Garcia, showed he was more than capable of making a dent in the division — he made a dent in Matthysse in the very 1st round, wobbling him with a right hand. A short right in the 2nd put Matthysse in an even deeper hole. And while Matthysse started working his way back into it in the 3rd and 4th, the hole deepened in the 5th with a borderline knockdown call from referee Pat Russell that was more a rabbit punch.

From the 6th until the end, however, Matthysse really came on, and while Molina was trading big shots with him, he was less able to contend with each consecutive round against that hellion. By that point Molina was bleeding badly on his scalp and Matthysse was bleeding badly over his left eye from a head butt, but each round seemed to spring a new geyser of red. In the 8th, Matthysse wobbled Molina and then shoved him down as he tried to hold; Russell ruled this a knockdown, too, evening the total of borderline knockdown calls at one apiece, although Molina didn’t complain. The 9th was a work of delirious violence — Matthysse for landing so many hard punches so cleanly, and Molina for staying on his feet at all and swinging wildly for the knockout by round’s end. By the 10th, when Matthysse scored another knockdown on a combination, it was getting time for the doctor to check in on Molina due to the accumulated beating. He was allowed to continue, only by the very next round, Matthysse wouldn’t let him, putting him down again, for good, with another combo.

Matthysse called for a rematch with Garcia, the champion at 140, but with Garcia looking at only one more fight at 140 before moving up, Matthysse might have to chase him to welterweight if he wants it. It was a conclusive win for Garcia the first time around, but not so much that a rematch would be pointless, especially if Matthysse keeps winning impressively and Garcia keeps struggling.

Until then, thanks to Matthysse and Molina putting it all on the line like that. Expect it to make at least cameos in various year-end lists of the best of 2014.

Showtime’s broadcast team reminded us endlessly that Belmontes had beaten Figueroa five times in the amateurs. You don’t need to watch much of Figueroa to pick up on the notion that he has more of a professional style than an amateur one. But perhaps Belmontes had been underestimated coming in, right off the best win of his pro career over Will Tomlinson. That win, though, was at 130 pounds. Figueroa is a strong, volume-punching lightweight.

Belmontes took the volume-punching play away from Figueroa early, moving well and punching accurately. Figueroa got closer and even took a lead on my scorecard by the middle of the fight, although some of that was because Belmontes was boxing a touch too little, appearing to engage him up close by choice. Thereafter, the action slowed to nearly none, as Belmontes boxed a better amount and landed more frequently on the frustrated Figueroa, who had trouble making any contact at all. Then, somehow, the action slowed even further, and Belmontes let Figueroa win rounds largely just by moving forward. Neither man approached the 12th round with anything like urgency — it was one of the worst late-fight stands from both combatants you’re likely to see in a bout that could’ve been on the table.

Naturally, with Figueroa the favored Golden Boy Promotions/Showtime fighter, it wasn’t. Either scorecard of 115-113 for Belmontes or even 116-112 for Figueroa would’ve worked. 118-110 for Figueroa was a classic “house fighter seals the deal with a laugher on the third scorecard,” a real solid execution of a genre staple.

Before this fight, the notion of matching shaky-chinned Jorge Linares against Figueroa sounded like a disaster in waiting for Linares. After seeing Belmontes do this to Figueroa, and considering how much more sublimely skilled and active Linares is in the ring than Belmontes, it might be the other way around.