Abner Mares leads this edition of Quick Jabs with his supposedly hacked Twitter account, where he declared he’s into dudes. I don’t care one way or the other if he does, but rocking up to the fights on Saturday looking like a height-challenged Mexican James Franco didn’t help matters (I kid, I kid). Anyway, Mares’ trash talk to Jhonny Gonzalez is getting out of hand, seeing as, you know, he seems to be avoiding a rematch with him. In the Twitter exchange below between the two featherweights, Mares starts things off by saying “You can adorn yourself with the wings of others, but you can’t fly with them.” Gonzalez replies with a zinger: “I don’t need your wings, I cut them off with a hook and flew away with your title while they counted you out.” REKTD. 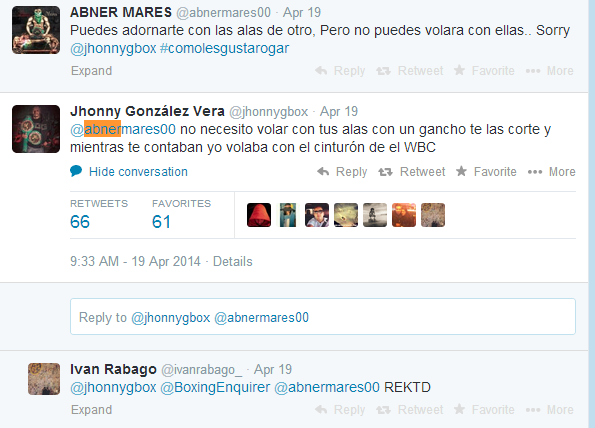 Anyway, it’s a bumper edition of QJ– there are more jabs than a Wladimir Klitschko fight, and they’re certainly quicker. So jump in, jump out and read only what you want.

Speaking of Klitschko, that was some vintage tomfoolery from Shannon Briggs crashing the Klitschko vs. Alex Leapai presser, stripping off and doing some push ups. It lasted almost as long as the fight itself. The chance of a big payday makes people do some crazy things and I guess Briggs isn’t much worse an opponent than Leapai, though at least Leapai was new to the Klitschko merry-go-round and has never been rumoured to have suffered a brain haemorrhage. I do like that Briggs was polite enough to say “don’t be sorry” to the German security guards who were polite enough to apologise for kicking him out, though.

Enough levity, though, it’s time to get down to the nitty gritty. The biggest news of late is that, as per Lance Pugmire, there seems to have been some sort of a rapprochement between Oscar De La Hoya and Bob Arum. De La Hoya, though, is notoriously skittish and Arum is notoriously cranky – so I’ll believe it when I see it (and don’t hold your breath for Canelo Alvarez vs. Manny Pacquiao, as discussed). I can’t decide whether the best bit was when Arum laughably claimed to have always “had a good relationship with Oscar” or when Golden Boy Promotions CEO Richard Schaefer immediately contradicted De La Hoya over his contract extension, or when they sat nearby at Keith Thurman vs. Julio Diaz but didn’t shake hands (no word if there were any “accidental” drink spillage in lap incidents). Oh wait, those are the worst bits.

In more bad/Cold War type news, ratings from last week’s Showtime show headlined by Bernard Hopkins were mediocre, averaging 693,000 viewers. It probably had something to do with the NBA playoffs being on (so I’m told, I’m not so big on the non-face-punching American sports), but probably also a lot to do with HBO counterprogramming Showtime with their replay of Timothy Bradley vs. Pacquiao II. They always do that a week after the fight, though, so I guess maybe it couldn’t be avoided. In his late career Hopkins has always been a reliable ratings draw, so hopefully it’s a blip, anyway. In other news for the #ratingsheads, the Bradley vs. Pacquiao pay-per-view numbers are expected out next week. Arum says he expects 1.2 million buys, while mysterious “industry insiders” tip 700,000. I’d think it’d be closer to the latter figure, but what do I know — I’m an industry outsider. Pacquiao’s weakest performance at the live gate in eight fights would seem to back that prediction.

In other Bradley related news, the guy will likely be out of action for three months with the bung calf he picked up in the Pacquiao fight.

And in other Hopkins news, the old fellow had a bit of a go at Floyd Mayweather, saying that his claim to be “TBE” (that’s The Greatest Ever, if you haven’t kept up with Mayweather’s line of snapbacks) is a bit ridiculous, which it is. For his part, Floyd said that Hopkins is just trying to “hit the jackpot” and get a fight with him. This would usually be where I’d talk about Mayweather vs. Maidana All Access Episode Two AKA “Floyd being a rich dick,” but I don’t want to for obvious reasons.

Moving on to more Hopkins chat, George Foreman has advised B-Hop to get out of the fight game and into the grill game (no, not like Adrien Broner). The former boxer’s grill market is probably cornered, but maybe he can open a grill restaurant or somefing.

Then there’s the news of the legal variety, with junior lightweight star Mikey Garcia suing Top Rank to get out of his contract. He’s claiming that they weren’t giving him a fair monetary deal fights, especially his proposed fight with Yuriorkis Gamboa. Julio Cesar Chavez, Jr. seems to be echoing that sentiment, claiming that Top Rank is trying to force him to ink an extension before a fight with Gennady Golovkin. At least Golovkin is reportedly in good shape emotionally after the death of his father.

At some point we’re just going to have to stop telling you who has signed with “advisor” Al Haymon and just tell you who hasn’t. Chavez is rumored to be in talks (another potential hold-up for the Golovkin fight), as are BJ Flores (that guy still fights?), Caleb Plant, Alex Martin, while Amir Khan and Robert Guerrero are confirmed additions to the roster. You’re probably next, dear reader.

The Nevada State Athletic Commission has a new director, Robert Bennett. He replaces Keith Kizer, who served for eight years, in perhaps the most important combat sport regulatory position in the world. A former marine and boxing judge, he seem eminently qualified for the role. Kizer had copped some criticism in recent years for assigning CJ Ross to judge Canelo vs. Mayweather after her howler on Pacquiao vs. Bradley I and fining Chavez Jr. nearly a million dollars for marijuana use.  Yet overall he was a good administrator who presided over record ticket sales and instituted stricter drug testing. No boxers died in Nevada while Kizer was NSAC director. Let’s hope Bennett can keep up that good work.

File under sad: Felix Trinidad is reportedly broke after an aide spent a whole lot of his money on worthless government bonds. Someone needs to set up a financial literacy training centre for boxers. Also sad: Riddick Bowe’s Twitter account.

Former junior middleweight contender Kassim Ouma was arrested in LA last week for allegedly knocking out a guy who made a pass at him. If he’d just taken it as a compliment he would be in a lot less legal trouble right now. Also he’s a former Ugandan child soldier, so I’m sure he’s dealing with some issues.

You should probably know that Ruslan Provodnikov plans to break Chris Algieri morally (he thinks).

Junior middleweight Nobuhiro Ishida is a heavyweight now and it looks kind of weird and kind of cool. I give him a year ‘til he fights a Klitschko (am I joking? I don’t even know).

British heavyweight/loudmouth David Haye is hinting at a comeback. I don’t really care and don’t want to hear about him unless he cures cancer.

Sixties middleweight contender/civil rights icon Rubin “Hurricane” Carter died during the week. A lot of ink has been spilled over the man, but I wrote and obit of him focusing on his boxing career with the help of TQBR’s own Patrick Connor. You can read it here.