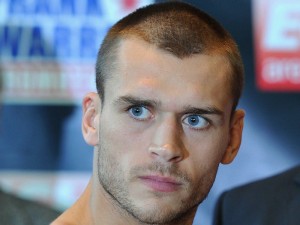 In a suburban Leeds gym, a boxer punches out a percussive rhythm akin to a death march. In an adjacent room close to the entrance of this triangular, bone-coloured building, I’m talking to a ghost. John Murray isn’t supposed to be here.

In November 2012, Murray, a former British and European lightweight champion, was tapering down in training ahead of a pivotal clash with Welshman Gavin Rees, when the British Boxing Board of Control contacted him regarding his pre-fight medical.

“I got a phone call saying I had a tumour on my brain,” he recalls. “Obviously I was in bits. I’m not ashamed to say it. I said: ‘Am I going to die? Is it life threatening?,’ and he [the BBBofC official] said: ‘We can’t tell you, you’re going to have to see a doctor.’

“I was gutted. I was devastated. I’d been out of the ring a year already, you know? You need the money.”

He broods upon the recollection, affording it gravitas. “It was a dark day. It was a low point of my life. I struggled.”

Recoiling quickly, his countenance stiffens. “I got up,” he glowers. “I wiped my mouth, I dusted myself off and I cracked on.”

Cast into limbo and with the Rees payday gone, Murray managed to cobble together some work as a manual labourer while he attempted to make sense of his situation. It wasn’t an easy transition for the Levenshulme pressure fighter to make.

“Boxing’s a tough game but I’d grown accustomed to it,” he explains. “You go and tell the average man on the street to come and be a boxer and get punched in the head for a living – they won’t be able to do it. It’s just as hard going the opposite way. I’ve been a boxer my whole life so having to get up and go and graft on the roads in the freezing cold — it’s different and it was tough.

“I was out grafting the day I was supposed to have been fighting Gavin Rees. It was only a week earlier that I was still in training. Next thing I’m there on the roads digging away.

“It’s made me very, very tough,” he continues. “I’ve always been tough mentally but I really asked myself some questions in that dark time. I’m pleased to say I came through and I’m proud of myself. I’m a tough cookie. I showed myself I can adapt and change.”

Thankfully, the subsequent battery of tests uncovered, not a tumour as first feared, but rather a swollen pituitary gland. It was a green light for Murray to resume his career after a two year sabbatical.

“I didn’t want to box again if there was a risk of me being hurt or damaged or anything, I wouldn’t have taken that chance,” he says. “I’ve got a family to support and look after and I can’t afford to be damaged or to be out of action.

“Luckily enough, the top brain surgeons in the country looked at my scans and said there’s no problem with me fighting. I don’t think it’s had any effect on me.”

Murray, 33-2, 20 KOs, returned to the ring in November and has since blown through Nicaraguan Michael Escobar and Scot John Simpson in order to set up a mouthwatering clash with his former gym mate, Anthony “Million Dollar” Crolla, on the undercard of the Scott Quigg-Nehomar Cermeno junior featherweight title fight in Manchester on April 19th. It is a showdown that pits him, almost cinematically, against his estranged mentor Joe Gallagher — a man Murray has little regard for.

“The truth is: Gallagher is a horrible, horrible man,” he claims. “There’s a reason why no-one in boxing likes him. He’ll step over anyone to get what he has to get out of it. When I failed the brain scan, he didn’t pick up the phone once. There was a time when me and Joe would speak every day. He used me, used my brother [super featherweight prospect Joe Murray] and once he got ahead he just dropped us and that was that.

“When I was with Joe, he took control of everything and I put my trust in him. I stuck with Joe through thick and thin and I was loyal. In the end it was him that abandoned me and him that showed no loyalty. He left me and he left my brother.”

In Gallagher’s defence, he has steadfastly denied Murray’s claims, asserting that Murray walked out on him to work with Marsden. Whatever the truth is behind the rift, Murray feels it was for the best.

“The last three or four fights that I had under Joe, they were flat performances,” he says. “It was only a matter of time before I got beat.”

After struggling against Spaniard Karim El Ouazghari in April 2011, Murray suffered his first defeat that summer after a blood-and-thunder war with Londoner Kevin Mitchell.

A significant underdog, Murray’s chances appeared enhanced after a weight-ravaged Rios was forced to relinquish his title on the scales. Rios, though, would ultimately prove too big and too strong; despite a spirited effort, the outgunned Mancunian was halted in the 11th round, and while he’s proud of the stand he made that day, he once again takes the opportunity to inveigh against Gallagher.

“It was a tough, grueling battle [the Rios fight] and I needed someone who knew what it was like to be in that battle. I needed someone to say: ‘Look John, you can have a round off here now.’ Joe Gallagher didn’t do that,” Murray says. “Every single round it was: ‘Get out there at 100 miles an hour, keep going, he’s going to go, he’s going to fade,’ and in the end it was me that faded because Rios was cleverer. He had a good cornerman [in Robert Garcia]; he knew when to take his rests and knew when to work.”

Murray seems far from bitter, though. He is enlightened, awake. He tells The Queensberry Rules that he has no regrets. He has embraced the chance to revolt against a career that left him penniless and on a losing streak – an existential funk that has rendered him more self-aware. He is a victim of what Sartre termed bad faith; he is now master of his own ship and better able to command how the end games will play out.

“I had it taken away from me — thinking I’d never be able to fight again,” he says. “I’ll rely on myself now.

“It’s the last chance. I need to keep winning and keep looking good. I don’t think I’m ever going to make any life-changing money out of boxing, but I might be able to make enough money where I can try and set something up – maybe get a gym so I can make a living. I need to focus, get what I can out of it and get out with my brain still intact.

“I’m lucky it happened when I was still young enough to come back. I’m just lucky man,” he continues. “If it happened to me now and I had to come back at 31, I’d be finished.

“It’s not all been good but it’s helped make me the person I am today and I like the person I am today. I think Crolla’s perfect for me. He’s a big name in boxing and he’s above me. If I can beat him I’ll take his spot and I’ll go on. It’s a massive platform — if you win in Manchester in front of all your home fans, maybe they’ll come back and watch you again?”

“I’m 29 man. I’m in the prime of my career right now and I intend to make the most of this second chance I’ve been given.

“I’m fresh, I’m sharp and I’m punching hard — harder than I’ve ever punched in my whole career. I’m feeling really good and I’m not getting tired. I’m back to being that old machine — just relentless in training. I’m a dangerous, dangerous man for anyone in this country – maybe even the world.”