In what was shaping up to be an excellent Friday Night Fights main event from Pala, Calif., Rustam Nugaev collected a win via stoppage when Marvin Quintero stayed on his stool after the 4th round with a reportedly injured left hand. The official score cards had the bout even, as did I, but Quintero (25-5, 21 KOs) seemed to be getting the better of many exchanges. Nugaev (27-6-1, 17 KOs) of Perm, Russia was able to trap Quintero along the ropes for long stretches of each round, but Quintero threw sharp counters. Nominally a lightweight bout, the fighters actually weighed in today with a 143 lb. limit as Quintero was unable to make it into the U.S. until this morning. Nugaev looked sluggish at the beginning of the bout but was starting to heat up in the 3rd and 4th rounds.

The obvious next step for both fighters is a rematch.

In the co-feature, bantamweight Roman Morales earned a unanimous decision over the excellently mulleted Khabir Suleymanov by scores of 79-68 (2x) and 80-67. As the scores make plain, it was not a close fight. Morales (18-0, 9 KOs) knocked Suleymanov down five times but was unable to finish him. Suleymanov (16-4, 6 KOs) fights like a man who is genuinely looking forward to being on an all-pudding diet. He is amazingly tough and resilient but has little skill. Morales showed good technique and an attribute that most young fighters lack, patience. At no point in the fight did he appear to be in a hurry and even when he had Suleymanov hurt, there was no special rush. Morales took his time and dominated a very game, if grossly overmatched, opponent. Morales is ready for a step up in competition. 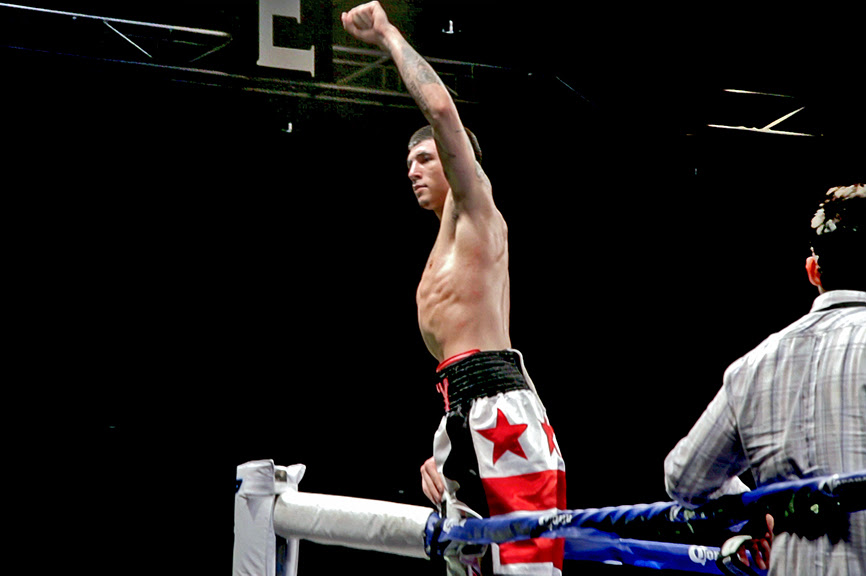 Washington, D.C. welterweight prospect Dusty Hernandez-Harrison (at right) survived some shaky moments and a booming overhand left that dropped him unceremoniously on his ass to out work Michael Balasi and get a unanimous decision in the opening fight. The judges scored it 59-54 (2x) and 60-53. I had it 58-54. Hernandez-Harrison (21-0, 11 KOs) landed the more telling blows and was busier throughout, but was betrayed by his flaws. Balasi (10-4, 7 KOs) was able to catch Hernandez-Harrison cleanly with overhand lefts throughout the fight, but they proved not to be enough. If Hernandez-Harrison is to step up his level of competition he is going to have to learn to move his head, as well as stay on balance. He has a habit of getting too far over his lead foot. At only 19, though, he and his team have plenty of time to iron out these issues.

Rabies Watch: Where to begin? Whether it was talking over Bernardo Osuna, his diatribes about Julio Chavez, Jr. and Alfredo Angulo, or his extremely thinly veiled shots at Quintero, ESPN’s Teddy Atlas was in rare form. I don’t know if Quintero could have continued, but I tend to give fighters the benefit of the doubt. The only way Teddy could have been more obvious would be to just come out and call the guy a pussy.

Just a tip for the nice folks in Bristol, maybe someone should get Todd Grisham phonetic spellings for fighters names. His butchering of Marcos Maidana was bad. On the upside, Osuna did an excellent job calling the fights with Teddy.