NEW YORK CITY — There is more than one way to interpret a t-shirt. Case in point: At a New York City happy hour Saturday for media meant to hype next weekend’s HBO showdown between light heavyweight power punching sensation Sergey Kovalev, Blake Caparello, whose promoter fancies his boxing skills to cause Kovalev problems, was wearing a t-shirt emblazoned with Muhammad Ali in his iconic pose above Sonny Liston after knocking him out.

Caparello, asked about whether it had any special meaning, at first answered, “My girlfriend bought it for me.” But, tellingly, he went on: “You’ve got to respect Muhammad Ali. He got hit by a lot of big punchers and found a way to win.”

Caparello believes that respect should be extended to Kovalev’s power, too. Just not fear. ” If you fear the power, you’ve lost the fight already,” he said. “You’ve got to respect it but you can’t fear it.” And that means negating it — not just sitting there in his power zone, Caparello said.

He wouldn’t say how to do that, but Caparello’s promoter, Lou DiBella, had some notion of it. He referenced this Saturday evening’s star, Gennady Golovkin, in so doing.

“Blake Caparello is the best guy he’s ever fought and has the best style to beat him, in the sense that if you stand in front of Kovalev, like if you stand in front of GGG, you’re going to lose,” he said. “If you’re not fast enough to move in and out, give angles, throw three punches and get away, you’re going to lose. [Cedric] Agnew showed a little bit the vulnerability of Kovalev,” mentioning that he thought Agnew’s movement and angles frustrated Kovalev.

Not that DiBella is overconfident.

“Blake thinks he’s going to win, and that has me convinced he’s going to win,” he said. Later, he added: “But I’m not going to lie to you, I’m going to be worried until the final bell because the man can friggin’ punch holes through walls.”

John David Jackson, Kovalev’s trainer, doesn’t buy the notion that Caparello can mimic any of Agnew’s success. “Cedric went into a total shell.  Blake is not that kind of fighter,” Jackson said, pointing to Caparello being more inclined to drop his hands to make his opponents reach and miss. “He wants to go right to a guy, and that helps us out.”

Caparello is a fringe top 10 contender, so he’s far from an illegitimate opponent, but in some ways this is a keep-busy fight for Kovalev,  Main Events’ Kathy Duva admitted, unless Caparello surprises. He’ll have one more fight later this year, and hopefully, she said, it’ll be a big one — the wait for which no longer frustrates her.

“It was frustrating when we were on the brink of making a big match early this year,” she said, talking about a bout with light heavyweight champion Adonis Stevenson. “We’ve been having conversations last few days about [Jean] Pascal, and I’m hearing we’re about to have conversations about [Bernard] Hopkins with Golden Boy.”

When told Hopkins wasn’t with manager Al Haymon, one of the subjects of a Main Events lawsuit, she said, “Now I’m excited.” Hopkins, she said, was the preferred choice to Stevenson, who signed with Haymon and bailed on what Main Events alleges was a deal with HBO for Kovalev: “When I say preferred choice, I’m dealing with what’s possible. Stevenson is simply not possible. He took himself out of the game.” She said the lawsuit is moving slowly, and there haven’t been any substantive discussions or meetings about it.

She acknowledged Hopkins might have been using the prospect of Kovalev fight to force some action with Stevenson, but that he also might mean it — that if he can’t get the Stevenson bout going the way he wants, he might

Among other potential Kovalev opponents: Duva mocked Andrzej Fonfara — who impressed by dropping and troubling Stevenson — gently for calling out Kovalev, then saying he would fight him if the money was right. She also said Isaac Chilemba, also promoted by Main Events, wasn’t a good option because she has other plans for Chilemba to make more money via other means — plans she wouldn’t specify.

“If Hopkins really means he wants to fight Sergey,” Klimas said. “I can’t say what he thinks. It’s hard to say. Bernard is very smart in the ring, and very smart outside the ring.” When “the opponent is announced, Bernard starts to control his opponent,” Klimas said.

Stevenson is still a desirable option theoretically, Klimas said, but Fonfara “put Adonis where he belongs.” Where’s that? “On the canvas.”

Kovalev himself was a pure quote machine. And after the festivities, reporters were offered some pretty innovative swag: Sergey Kovalev socks, modeled here by a colleague. 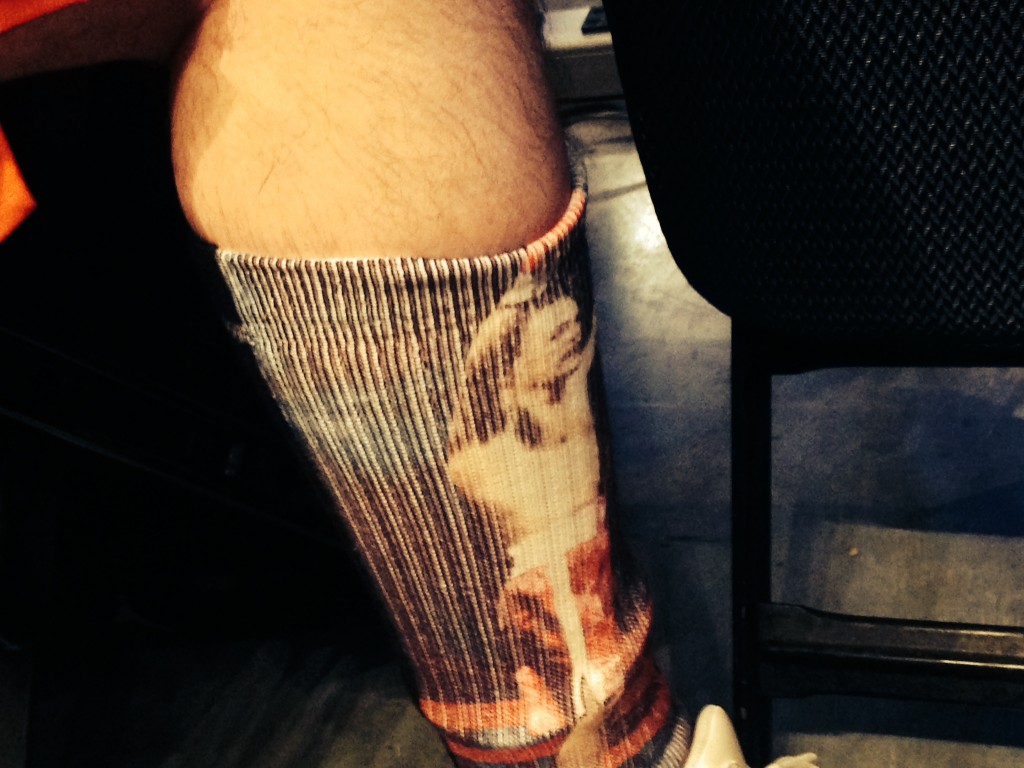 On his where his power comes from: “From hard workout, from hard hard work in the gym, from my concentrate and from my body. Maybe my bones are heavy, I don’t know.”

On when he first realized he had power: “I think that everybody can punch hard, but maybe they don’t want to do it. I want it.”

On other nicknames he has besides “Krusher”: He used to be called “Koval,” which, in many Eastern European languages, means “blacksmith.” When your backup nickname is someone who hammers swords into shape on an anvil, you’re talking about a badass.

On his television watching habits: “A really thank you to HBO, which is my favorite channel.”

On his next opponent possibly being Hopkins: “I don’t know Bernard Hopkins. I know Caparello is my next opponent.”  (Pressed, he acknowledged he “would like to fight any champion in my division.” Not that he knew anything about Caparello either, when asked about him.)