We’ve gotten used to light heavyweight power puncher Sergey “Krusher” Kovalev krushing everyone in short order, so it was mildly disruptive of the pattern on HBO Saturday that unheralded Cedric Agnew took seven rounds to get krushed. Yet get krushed he did, posing only slightly more difficult target practice than usual.

In the sense that Agnew had good defense, he made it harder on Kovalev to do his car compactor act. But Agnew also did little in any effort to win; he landed a total of 31 punches in the fight, by CompuBox’s count. It’s easier to be defensive when you refuse to open up. The only thing Kovalev did to win the 1st was score a low blow (he was also warned for them repeatedly throughout). Kovalev dropped him in the 2nd and in the 6th, even if the 6th round knockdown was borderline. A 4th round head butt opened up a cut over Kovalev’s right eye, not that it seemed to bother Kovalev.

Agnew began the fight seemingly unintimidated, a trend that ended fairly quickly. We heard from local Chicago media that Agnew was confident, but, as noted in our preview, confidence only gets you so far against elite opposition, since Agnew had faced no one even close to it beforehand. Agnew’s confidence dwindled significantly as the fight went on, as he went from reluctant to open up and conservative to totally unwilling. By the end of the 6th round, he appeared to want no more, saying “my rib” to his trainer. 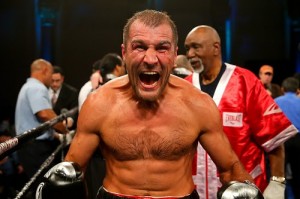 Early in the 7th, Kovalev threw a left jab to Agnew’s body, and Agnew could do no more.

What do we get from this? We get that a pure boxer and quality athlete who’s 100 percent focused on defense can cause Kovalev some consternation, but not enough to do anything else. A pure boxer with some actual experience and offensive acumen, like Bernard Hopkins, might dismantle Kovalev. An athlete with punching power, like champion Adonis Stevenson, might cause him some trouble. But Kovalev, while hittable, is a skilled enough offensive fighter to make his power matter, and he found a home for his power in Agnew’s ribcage.

Really, though, this was a mostly worthless fight out of context as a set-up for Stevenson, who has left for Showtime. Agnew might have a future in the sport, as he has some skills, and it’s entirely possible he just took too far a leap up against a fighter who would beat most anyone in the division if not everyone. Kovalev is a force of nature, wonderful to watch. Kovalev, though, has no obvious next opponent now that Stevenson is gone. Kovalev spoke for most people when he said, in the post-fight interview, “Adonis Stevenson piece of shit.”