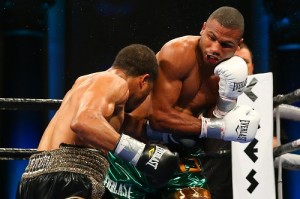 Judging from the 1st round, Thomas Dulorme was going to be too quick, too big and too powerful Saturday night on HBO against fellow junior welterweight Karim Mayfield. But the fight went through a few metamorphoses, ending up with Dulorme pulling out a unanimous decision win that was anything but resounding.

Dulorme hurt Mayfield twice in the 1st, and appeared physically enormous against Mayfield; Dulorme has been moving down from 147, and Mayfield is a smallish 140-pounder. Mayfield, though, made Dulorme respect his power in the 3rd round, and Dulorme was exceedingly uncomfortable as Mayfield bulled him against the ropes. They split the next several rounds, with Dulorme landing the harder overall shots and Mayfield landing some good ones with his free hand in clinches.

Dulorme suffered a cut on his scalp in the 7th, and with his confidence already shaky, it could’ve been pivotal. Instead, the fight stayed largely the same: Dulorme loading up or tying up, Mayfield too cautious but doing good smart work here and there, like with his jab. In the 8th, Dulorme connected on a couple low blows that appeared incidental to me, intentional in the second case to others, and it did appear to swing the 8th Dulorme’s way as he had more energy after them than Mayfield. In the 10th, Dulorme applied the death grip to Mayfield anytime he got close, to the point that referee Steven Smoger should’ve at least warned him for refusing to separate. It lost him the round, but he stayed on his feet, which is what he needed to do: The judges scored it 98-92, 97-94 and 96-93, a bit wider than I had it.

In a meeting of fringe 140-pounder contenders, neither man ultimately really separated himself. It was a lackluster bout, although not a stinker, per se. Mayfield and Dulorme both could’ve performed better, and Dulorme was not especially impressive despite winning. Dulorme appears more like a natural athlete than a natural boxer. Mayfield’s new half-trainer Virgil Hunter gave him the right advice, that he needed to turn it up even if it meant getting knocked down, and it didn’t do the trick. Dulorme’s new trainer, Robert Garcia, at least has a chance going forward of molding a natural athlete into a tip-top boxer. Nobody should’ve given up on Dulorme based on his defeat by Luis Carlos Abregu, but Dulorme needs to do more to make anyone actively believe in him.