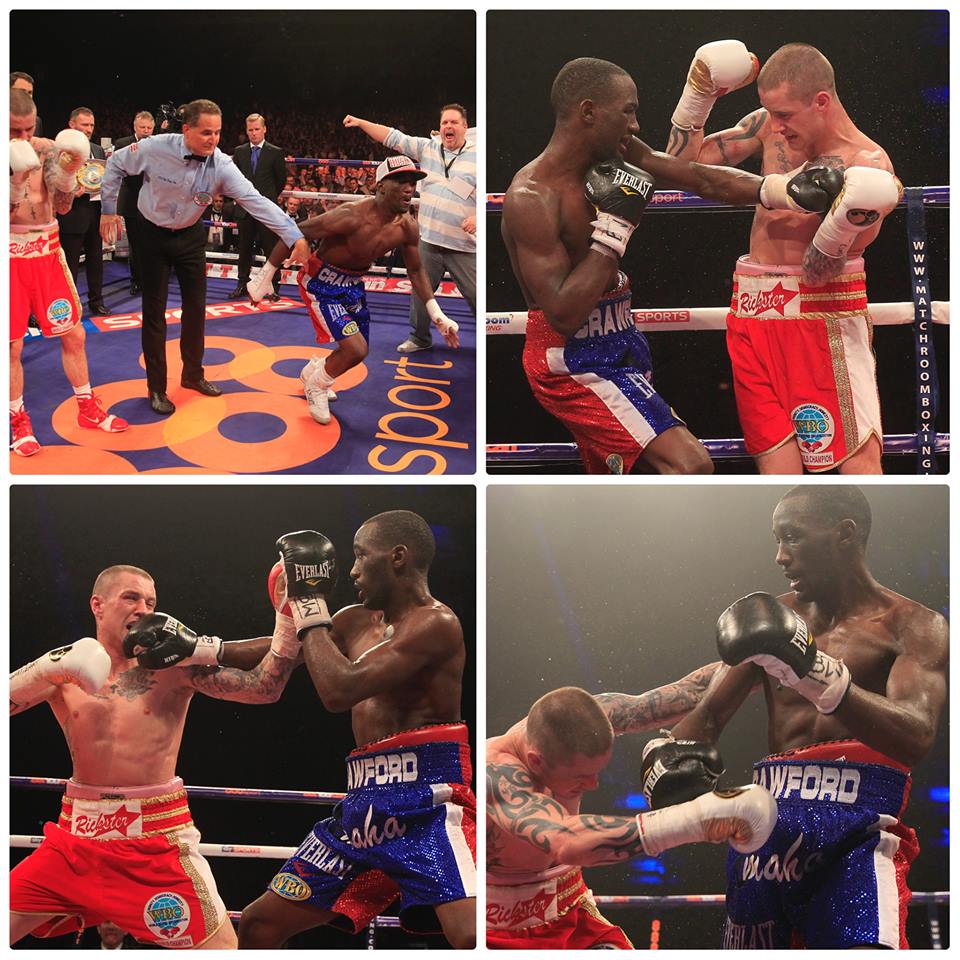 This time, Ricky Burns couldn't benefit from an opponent quizzically quitting, like Jose Gonzalez did, or from hometown judging in Glasgow, like the kind that saved him from a loss against Raymundo Beltran. Terence Crawford was too much for Burns Saturday on AWE, even if he wasn't as good as he could've or should've been, and he got the unanimous decision win.

Both men started the fight off like they needed to, with the taller Burns continuously pumping out his jab and Crawford responding with uncharacteristically aggressive power punching combinations. For some reason, Crawford more or less disappeared in the 2nd and 3rd, fighting from a southpaw stance that didn't seem to help him much. But by the 4th, when Crawford resumed his aggression and backed up Burns to force him into a defensive shell, it was all Crawford. Burns tried to rally in the 9th, and won the 10th on my scorecard and some others, but Crawford snuffed out his momentum in the 11th and beat him up in the 12th. The score of 117-111 was the same as mine, with the two 116-112 scorecards a touch too generous to Burns.

To hear Sky Sports' Jim Watt tell it, this was a "different" Burns, an underconfident Burns, a Burns worried about the jaw Beltran broke. You'd think he hadn't seen Burns' performances against Beltran (who deserved to win in one of the robberies of 2013) or how Burns was getting dominated by Gonzalez, a fighter with no real track record. Nope, this was the same Burns we've seen lately — a pugilist apparently past his best days, still capable of showing flashes of grit or effective yet ragged boxer-puncher business. Burns overachieved for a time, and it was an impressive run. These days, he apparently doesn't have it.

For as clearly as he won, for all his speed and schooling, Crawford comes away from the by far best victory of his career a bit of a headscratcher. He had to know that a laissez faire approach was poisonous to his chances of winning on foreign soil, yet showed that attitude early. He turned up the activity from the 4th on, but still had stretches where he didn't keep the pressure on his man; it took Burns catching him with a good one here and there to make Crawford respond with gusto. I wonder if it's about temperament for him, or maybe it's stamina — in the 12th, he went on full attack, and it didn't take long for him to get winded. Either way, he's in the discussion for the top lightweight in a division that is thin gruel right now. Yet it's hard to imagine him beating Miguel Vazquez fighting like this. As someone with hype as the potential to become the pound-for-pound best American fighter, we needed more from Crawford than we got Saturday. And while he delivered more action than he has of late, Burns had something to do with that, so whatever the nature of his temporary exile from HBO, it's not clear that if lack of excitement was to blame, he solved that problem, either.

On the undercard, blue chip heavyweight prospect Anthony Joshua made easy work of Hector Avila, stopping him in one round with a big counter left. Joshua, in just his fifth fight, appears all the world like a potential superstar and has the personality and look to compliment his size, athleticism and Olympic pedigree. But it is very, very early, and we learned nothing from this bout that we didn't know already. Promoter Eddie Hearn and Sky tried to sell Avila as the man who went nine rounds with Dereck Chisora a year ago, neglecting the fact that he'd been stopped twice since, including once in the 1st round, by fighters far inferior to Chisora. Hearn said they'd be looking at Michael Sprott or Matt Skelton next, two reasonable step-ups and reasonably advanced opponents for a prospect at this stage of his career.

Other than the main event, the rest of the card was loaded up with bores and mismatches (which includes Joshua's), save perhaps Scott Cardle's stoppage of Paul Appelby. Usually you celebrate a seven-fight telecast, but it felt interminable because of the nature of the matchmaking.