The 1920s spirit flowed freely in 1923. The roar was protected by low unemployment rates, jazz and dance clubs crawled with frantic activity, and New York — a city that embodied the decadence of the decade — was graced with ambiguous prohibition laws that lubricated the mind and spirit. 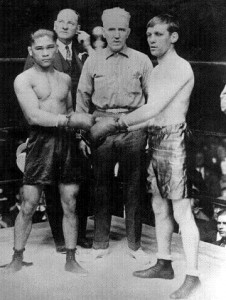 advocate, could no longer force promoters to seek out venues in neighboring states, and the adoption of the Walker Law all but ensured boxing’s survival. More importantly, Miller’s exit paved the way for the business of boxing to flourish in New York City and surrounding locales.

On June 18, 1923, the door was opened, and history was shoved through the threshold by the grating gloves of Filipino legend Pancho Villa.

As was the case with many countries and territories swarmed upon by colonialism and capitalism, along with soldiers and heaps of combustible black powder came boxing. Whatever the historical explanation, Villa, born Francisco Guilledo, smacked around the other kids in his village. His propensity toward tangling with others led Villa into the eager hands of a local promoter who guided him to a record of 49-1-3 (14 KO) and 2 No Decisions before he headed for the U.S.

Villa would lose his first two stateside bouts against future champions Abe Goldstein and Frankie Genaro, and would lose to the latter twice more in the following year. Undeterred, he avenged the loss to Goldstein and caught the attention of Boston, New York, Philadelphia and New Jersey press with his kinetic style and a dose of curiosity regarding his ethnic makeup.

Eighteen wins and five losses after his U.S. debut, he found himself in a position to challenge feared puncher “The Mighty Atom” Jimmy Wilde.

Hailing from Wales, Wilde’s uncrackable outer shell a product of years spent in  coal mines with his father. As a teenager, he would scrap much broader fellows at local fairs and carnivals, often rendering them lateral with his shocking punching power. It’s unclear exactly when he turned professional, as there was no official flyweight division in most places, but it may have been when he was only 15-years-old.

From 1911 to 1921, Wilde compiled an official record of 139-3-1 (99 KO) and five No Decisions, though he claimed to have fought more than 800 times either professionally or semi-professionally. Indeed, some of his “official” bouts are nigh impossible to verify, and there were likely many more. But through almost 150 bouts, Wilde verified his legend personally, etching his greatness in a familiar crimson script, the inkwell courtesy of his victims.

Wilde’s candle began to flicker slightly as his weight finally cleared 100 lbs. He had only been stopped once, by Tancy Lee in 1915, until a highly underrated and much larger Pete Herman turned the trick again in 1921, leading to a firm hiatus.

Villa’s exploits were apparently enough to lure Wilde out of his self-imposed semi-retirement, particularly in light of Villa’s sequestering of the American flyweight title (which he lost to Frankie Genaro). In late May, Wilde arrived in New York on a ship called the Aquatania, intent on proving his dominance as the world’s premiere flyweight champion, despite already weighing one pound over the flyweight limit. The Rockford Republic said, “The attraction is of sufficient moment to outdraw any ballgame, with the exception of a world’s series meeting.”

Wilde told reporters waiting for him to step off the ship that he had been training for three months. When one of the reporters pressed Wilde about his impressive record and suggested that he had to be at least 40, he responded, “But this is the season for old men. Anyway, you’re nine years long. I’m only 31.”

Villa had lost to Genaro for the third time the previous March, and dropped a newspaper decision to Bobby Wolgast in May, but was otherwise well suited to face Wilde, much to the chagrin of Phil Bernstein, Genaro’s manager. It was a case of two action styles matching up well, even if Genaro’s status as American champ was more deserving of the fight.

The consensus among US journalists pre-fight was that Wilde had made the journey to collect a paycheck, though he insisted that he was ready to fight hard, and fight to win. Training in Jersey City, Wilde enlisted the help of private training partners and posed for pictures while his sons helped him with calisthenics, while Villa trained in the relative comfort of Pompton Lakes, N.J.

Famed journalist Robert Edgren said before the bout, “Wilde looks in better condition today than when he fought in this country on his former trip.” Manager and matchmaker Tom O’Rourke, who aided in finalizing the bout, received a $1,000 bet on Wilde on behalf of Peter Herman, who stated, “Wilde had me beaten up until the time I knocked him out. He is a great fighter. I want to back him against Villa.”

The Plain Dealer reported 6-to-5 odds, with Villa a favorite by fight time. The odds were right.

The Boston Herald said of the fight, “Wilde was but a shell of the once-great boxer who held undisputed sway among the little men of the ring for years.”

Fighting at a predictably quick pace, both fighters tore into each other through the first two rounds, with Wilde making attempts to use his boxing ability to calm matters. As round 2 came to a close, however, Villa landed a punch that rendered Wilde limp. Many in the crowd cried foul, and Wilde literally had to be dragged to his corner by his seconds.

As writer Harry Coady Lindop described the scene, “To all intents and purposes Jimmy was ‘out’ when knocked flat with a right to the chin as the bell sounded for the termination of the second. Villa had started the punch, and even had he wanted to could not have stopped the blow from landing.”

Wilde somehow found the energy to fight his way through the 3rd round, bringing fever dream action to the 40,000 in attendance at the Polo Grounds in New York. Robert Edgren’s call of the 4th round: “All through the fourth [Wilde] pressed Villa hard. Driven to the ropes, Villa used a double action punch, time and again hooking his left hand across and then swinging it back to catch Wilde on the chin on the return trip. It was a backhand blow, barred by boxing rules, as it was likely to be delivered with the heel of the hand.”

Wilde reportedly won, or at least came close to winning rounds 3 and 4. But they were the last stand of the bout and his career. The Welshman became arm weary and unable to deliver anything with power from the end of round 5 onward, and Villa sunk his fangs in, smashing Wilde with every punch possible. Cut from his last meal of leather and blood, Wilde lasted into the 7th round on adrenaline alone.

A right hand from Villa anesthetized Wilde after further beating in round 7 had the crowd begging for referee intervention. Face-down, Wilde lay in R.E.M. sleep, perhaps dreaming of the belted days mere seconds earlier.

More importantly to the all-consuming entity that is history, Villa became the first ever Filipino world champion, setting off riots of jubilation in his native country and remains a mythical figure to this day.

Ever pensive yet playful, Wilde commented after the bout, “It was the first time any man in my own class knocked me out. Maybe that means I’m getting old. I don’t know. He beat me fairly. I could not hurt him and every time he hit me I felt it. Villa is a great little fighter and will make a worthy champion.” Slightly more disappointed, Wilde’s wife, who left her ringside seat after six rounds, said, “He had to lose sometime.”

And that was it for Wilde. He would never fight again, content to live out his days playing golf in his spare time and sometimes making appearances, with his tiny frame and disproportionately large head distinguishing him from other former great fighters, among other things.

Roughly one month later, Mexican revolutionary Pancho Villa, who Guilledo may or may not have been named after (depending on which story you believe) was assassinated in Chihuahua, Mexico. But the stories of both Pancho Villas breathe on.