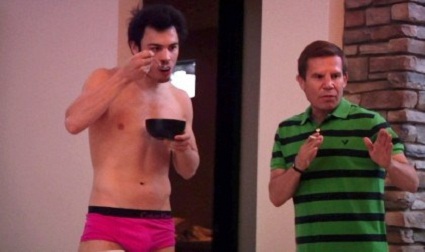 Sometimes Julio Cesar Chavez, Jr. asserts himself in the ring, using his size and brute strength to muscle around opponents en route to slowly beating them down. Other times he just gets high and eats cereal in his hot pink bikini briefs, which both co-hosts of Queensberry Rules Radio can possibly relate to.

Last weekend, Chavez scored a unanimous decision over Brian Vera, redeeming himself in the eyes of many, and extinguishing the torches that accompanied the pitch fork-wielding mob calling for his head. In the co-feature, Orlando Salido served Vasyl Lomachenko a 12 round reminder of the differences between the amateur and professional game.

This week on TQBR Radio, James Foley of Bad Left Hook and TQBR’s Patrick Connor recap all of that stuff, and preview the upcoming Saul “Canelo” Alvarez vs. Alfredo Angulo card. Even better, this coming weekend seems to signal the end of a dry spell in the sport, as action should get better from here. So let’s see how negative and sarcastic we can get about it.

Click this link to tune in live at 12:30 p.m. Pacific/3:30 p.m. Eastern, or download the episode later via iTunes or Stitcher Radio.