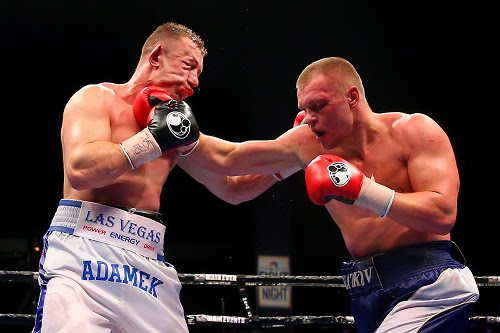 Heavyweight contender Tomasz Adamek has lived by the razor-thin, debatable decision of late, but even with the NBC Sports broadcast team cheering on his fight Saturday evening as though it was close, the judges saw it correctly: Vyacheslav Glazkov won by 117-110, 117-111 and 116-112.

Glazkov got what Steve Cunningham and Eddie Chambers deserved, then. He also got the best win of his career, and it put him in line for a shot at heavyweight champion Wladimir Klitschko.

A jabbing contest in round 1 might've gone Adamek's way. But by the 2nd Glazkov's jab was taking over, puffing up Adamek's right eye — a troublesome development that would later evolve into an almost entirely closed eye. Glazkov began adding in a big left hook and 1-2s, bloodying Adamek by the 4th.

As comfortably as the younger, fresher Glazkov was whooping Adamek, NBC Sports' B.J. Flores and Larry Hazzard were scoring it like it was close; Hazard even had Adamek winning. It really didn't get close again until the 10th and 12th, two rounds I scored for Adamek as Glazkov faded. Adamek was downright excellent in the 12th, throwing hard, effective combinations that forced Glazkov to clinch.

The right man won in the end. Adamek's borrowed time is over. At 37 and always undersized for the division, he showed he still has heart and the ability to fight effectively in spurts, but the only real chance he had of winning this fight was another bunk decision. The tall, youthful Glazkov was the man who gave him that one last shove over the cliff. Yet despite the great win, despite showing the ability to use his height, despite a solid jab and amateur schooling, despite the fattened purse that looms for him against the champ, he will only amount to another victim for Klitschko.