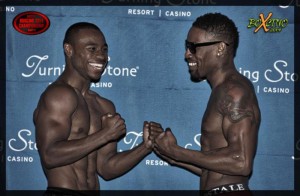 Willie Monroe, Jr. was a non-entity for the most part before entering ESPN2’s middleweight Boxcino tournament, and he surprised us all along his route to the finale. On Friday, he surprised again, thoroughly outboxing and at times outslugging Brandon Adams for the unanimous decision.

You could give two to three rounds to Adams, tops, as Monroe’s southpaw style — Adams had never faced a lefty before, incredibly — quickness and schooling flummoxed Adams for the duration. Adams gave a good showing. Some of the rounds he lost were close. When he would corner the elusive Monroe, they would exchange, which seemingly would have favored him — but Monroe was just clever and accurate enough to land clean shots during exchanges while bouncing off the ropes. Then, he’d go back to circling and popping Adams with his jab. By fight’s end, the scores read 99-91 across the board from the judges.

Adams, whose amateur record paled in comparison to Monroe’s, showed Friday that the main thing he lacked (besides big time power) was experience. He’s got a great head on his shoulders and never stopped competing, and said all the right things after the fight about this being a learning experience, striking the right balance between sounding too cheery about his first pro loss and letting that same loss get to him so much it demoralized him hopelessly.

Monroe, too, sounds like his head is properly affixed to his shoulders. The only thing he said that warranted incredulity was that he said he would move to 154, yet judging by his broad shoulders and long frame, it’s a stretch. He has fought below 160 before, but has only once made the junior middleweight limit. Or perhaps he merely looked bigger compared to Adams. Either way, he’s ready now for a top-10 middleweight or junior middleweight. Let’s see how many more surprises he has in store for us.