Don’t follow boxing very often, but you want to know the gist of Saturday’s mega-fight between Floyd Mayweather and Manny Pacquiao? Follow boxing all the time, and want one place that rounds up all the links about the welterweight showdown you could ever want? This Ultimate Guide to the May 2 HBO/Showtime pay-per-view bout is for you, no matter what kind of fan you are.

We begin, as usual, with our own work on Mayweather vs Pacquiao. I counted down the best wins of both Mayweather and Pacquiao. Alex McClintock provided you with the undercard preview and all the scheduled programming, as well as a podcast. Jeff Pryor made the case for when to bet on the underdog — in this case, Pacquiao, but it’s getting closer on the betting books. Matthew Swain previewed the fight, and predicted the winner. Sam Sheppard told us what would happen after it was all done. The whole team gathered for a staff roundtable to debate key issues for the fight. Lou Catalano dropped by to explain why Mayweather vs Pacquiao was better now than ever, and one more piece we’ll mention later.

Elsewhere, I wrote about past Fights of the Decade at Awful Announcing; about what Mayweather vs Pacquiao does and does not mean for boxing as a whole, at The New Republic; and I debated Daniel Roberts about Pacquiao’s legacy at Vice Sports. Alex gave everyone a run-down on the basics at the Australian Broadcasting Corp.

Want to get a sniff of both fighters in action? Try these videos, although the  second one is incomplete because HBO hasn’t handled Mayweather’s most recent fights.

For their complete records, go to Boxrec: Mayweather, Pacquiao. To get a sense of what’s on the line for the championship picture and history, read this from the Transnational Boxing Rankings Board, with which I’m affiliated.

What of their personal stories? HBO and Showtime both on YouTube and On Demand have a ton of documentary/marketing footage, including full fights. The Showtime series of “Inside” programs, which focused on Mayweather, wasn’t as good as the HBO one-shot “At Last” program, which focused on Pacquiao, but the Showtime series got better with each successive episode. By now, you might’ve heard Mayweather has a domestic violence record, and while rehashing it has become tiresome for some fans, here is some of the best stuff on it, first from Deadspin covering the big picture, then second, from Awful Announcing, covering Stephen A. Smith’s moronic involvement. Bleacher Report had a more comprehensive account of Mayweather’s back story. Deadspin also filed a minority opinion suggesting Pacquiao isn’t as good a guy as he’s made out to be.

Interested in watching Mayweather vs Pacquiao? Prepare thy wallet for pain. It’ll run you $100 to buy it via your cable/satellite provider in high definition. The Tecate rebate — up to $50 — is in place, for some states.

The Mayweather vs Pacquiao start time is 9 p.m. ET for the undercard. If you’re looking for the main event start time, it’s probably going to be closer to midnight, but I’d be in position by 11 p.m., just to be safe. If you want to watch the weigh-in, that start time is 6 p.m. ET Friday, and you can watch it at the above HBO/Showtime YouTube spots, as well as on your TV via HBO, Showtime and ESPN.

If you want to follow along on Twitter, the #maypac hashtag seems to have taken over, after #mayweatherpacquiao was the one the networks were using for a while. I’m @tqbr. Alex is @axmcc. Sam is @sheppast. Jeff is @pryor_notices. Matthew is @hanslanda0351. Andrew Harrison is @safesideotr. Like us on Facebook here.

As always, we leave you with some silliness on the way out, via Alex. 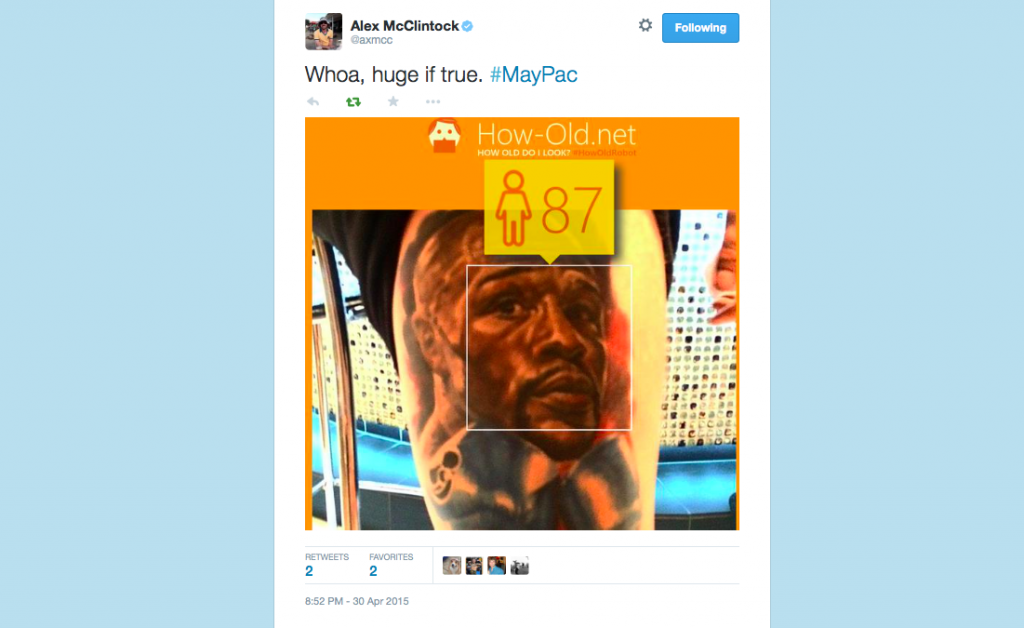