I’m relatively certain that I’ve never written anything complimentary about Vanes Martirosyan. In fact, I’ve probably never given any in or out of the ring action of his more than a perfunctory eye roll. But it’s been a slow couple of weeks and fuck it, here we are.

Yesterday, Martirosyan went on a miniature Twitter tirade in which he revealed his unhappiness with current manager Al Haymon and promoter Tom Brown in a since deleted tweet. I’ve never heard of Tom Brown, so we’ll skip him. What’s interesting here is Martirosyan breaking faith with Haymon. It’s borderline impossible to find anyone who has worked closely with Haymon and his PBC series who’ll speak in anything but glowing terms about Haymon personally and PBC as an operation. 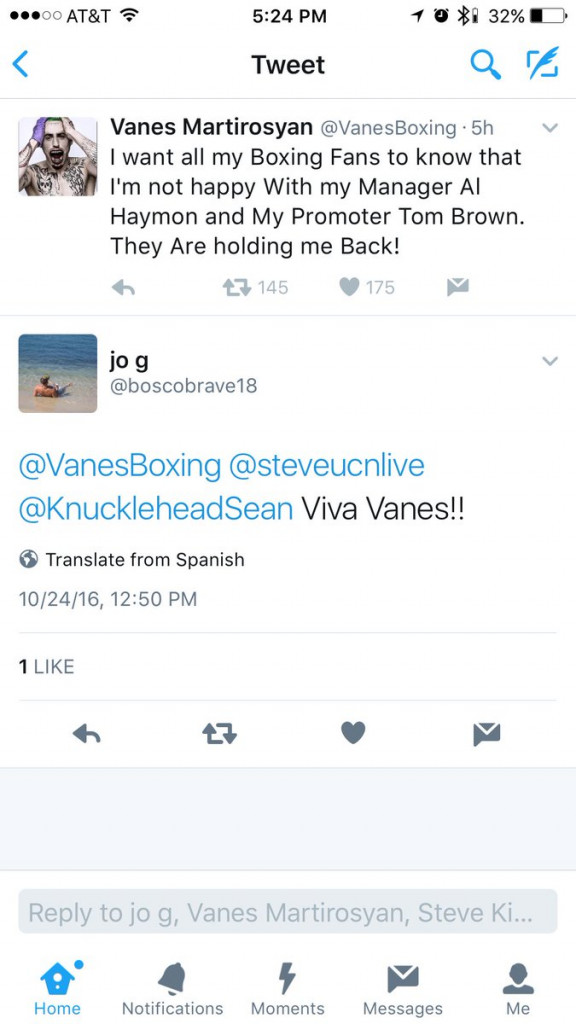 That’s not to suggest that everyone likes Haymon. His competitors seem to loathe or dismiss him, and fans have had plenty of reason to complain about PBC offerings. But amongst those whose pockets have become well lined working for PBC, there has been alarmingly little dissent.

Part of me was content to toss Martirosyan’s temper tantrum aside as whining from a guy who has spent most of his career doing just that. He was unhappy with Top Rank and has pulled out of several fights. He’s not fun to watch in the ring, and most people just don’t fucking care what he does. Count me among that legion.

What piqued my interest was the final declaration. “They are holding me back!”

It may or may not be true of Martirosyan, but there are several excellent fighters who have languished or outright regressed under Haymon stewardship. Danny Garcia and Gary Russell, Jr. appear to be perfectly happy taking one decent fight per decade; meanwhile, their primes have largely been wasted. They’re both excellent fighters who have the style to be fan favorites, but neither seems much interested in anything other than getting overpaid to do very little, which PBC has enabled. As such, my interest in them has dwindled or morphed into outright hostility.

On the other hand, I’m still curious to see Keith Thurman fight. It’s true that he’s not the explosive puncher that PBC and their media arms have claimed. He’s not even the “next great one” as ESPN’s Joe Tessitore repeated ad nauseum. But, he’s one of the three or four best welterweights in the world, and if he hadn’t been fed a steady diet of Leonard Bundus, chances are good that he’d be in a much better position in terms of marketability as well as in the ring, win over Shawn Porter notwithstanding.

The same goes for Errol Spence, Jr., who is undoubtedly the most talented welterweight on PBC’s roster. Spence is fast, skilled, and can really punch. Who’d he fight in August? Leonard fucking Bundu. Any momentum he had coming off taking Chris Algieri to the woodshed in April was entirely lost by fighting a nobody. Yeah, he beat the brakes of Bundu and looked fantastic, but who gives a shit? Spence is 26, has been a pro for four years, and beat Danny Garcia’s next opponent (Samuel Vargas) 18 months ago. Now is the time for Spence to be fighting top ten opponents, not taking the walking tour of PBC retreads.

Everyone thinks they know the business better than the people who actually run it. There are myriad facets of the boxing business of which I am entirely ignorant, many of which I have no interest in learning. I do know for a fact that seeing talented fighters fighting mediocre opposition isn’t making any new fans, and the trend is disheartening the ones who still exist.

*Author’s note: Since filing this column, Showtime has released its fight schedule for the next few months. Garcia will be facing Thurman on March 4. My opinion hasn’t changed at all. Garcia doesn’t have a win over a single welterweight of note, and until he does, fuck him. But, yeah, kudos to PBC for getting a fee from Showtime for making the kind of fights they suggested would be on free TV.